When my friend told me that he’d secured us an AirBnB in New York for our short stay to see some Yankees/Blue Jays baseball, I was stoked. One less thing that I’d have to research. You see, I often suffer from choice paralysis when it comes to choosing accommodations for a trip. Between hotels, hostels, and apartments, it can get overwhelming, especially in a city as big as New York. So where were we staying? East Harlem. Okaayy…

The apartment itself was great, on the ground floor of a brownstone walkup. The street was quiet. Though I stood out a bit in the crowds, I felt safe. And there were good eats to be had. Some very good eats.

No credit cards, no alcohol, no slices.

Patsy’s Pizzeria has been serving up thin-crust brick oven pizza for over 80 years in the same location. Once a favourite haunt of Frank Sinatra, Dean Martin, and Tony Bennett. It also played an important role in the making of The Godfather. There were even ties to Al Capone, who owned a string of dairy farms and forced NYC pizzerias to use his inferior cheese. Patsy’s was one of the exceptions who were allowed to use the good stuff, as long as they promised to never sell slices. 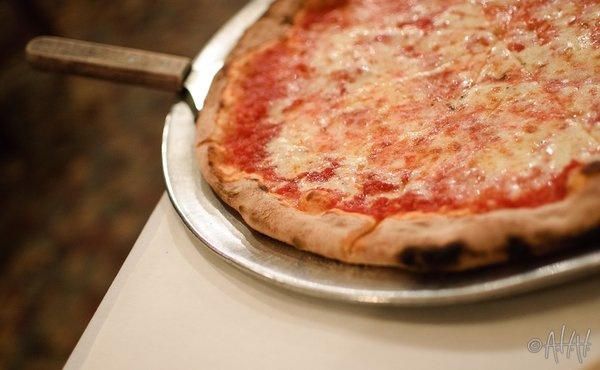 With a history like that, we had to go. For some reason our host wasn’t sure of, the liquor license has recently been revoked so you won’t be able to buy a brew to go with your pizza but you’re allowed to bring in your own wine (but only wine). We ordered up a Macelliao topped with pepperoni, sausage, beef meatball, grated mozzarella, and tomato sauce. It. Was. Amazing. Crispy charred crust. Delicious light sauce. Just the right amount of toppings. 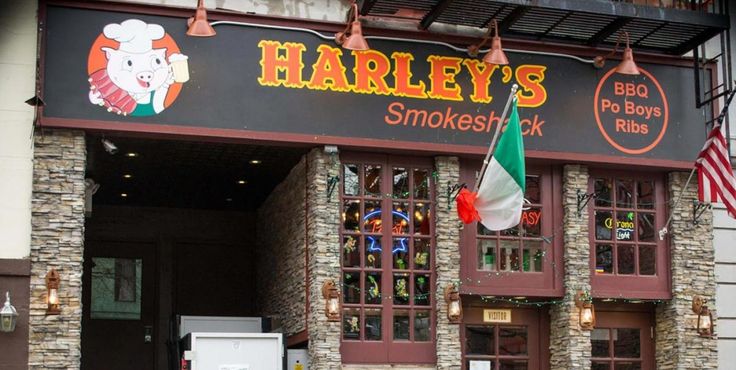 If you’re looking for somewhere where you can stuff yourself full of bbqed meat and watch sports, Harley’s Smokeshack is where you’re going to take yourself.

First thing I noticed when we got there was that the logo featured a pig cradling a rack of ribs, which immediately reminded me of Korea (they have a thing for showing you the animal you’re about to consume). We walked in looking for a late dinner only to find that the Blue Jays game was on one of the screens behind the bar. Score! Two seats at the bar please! 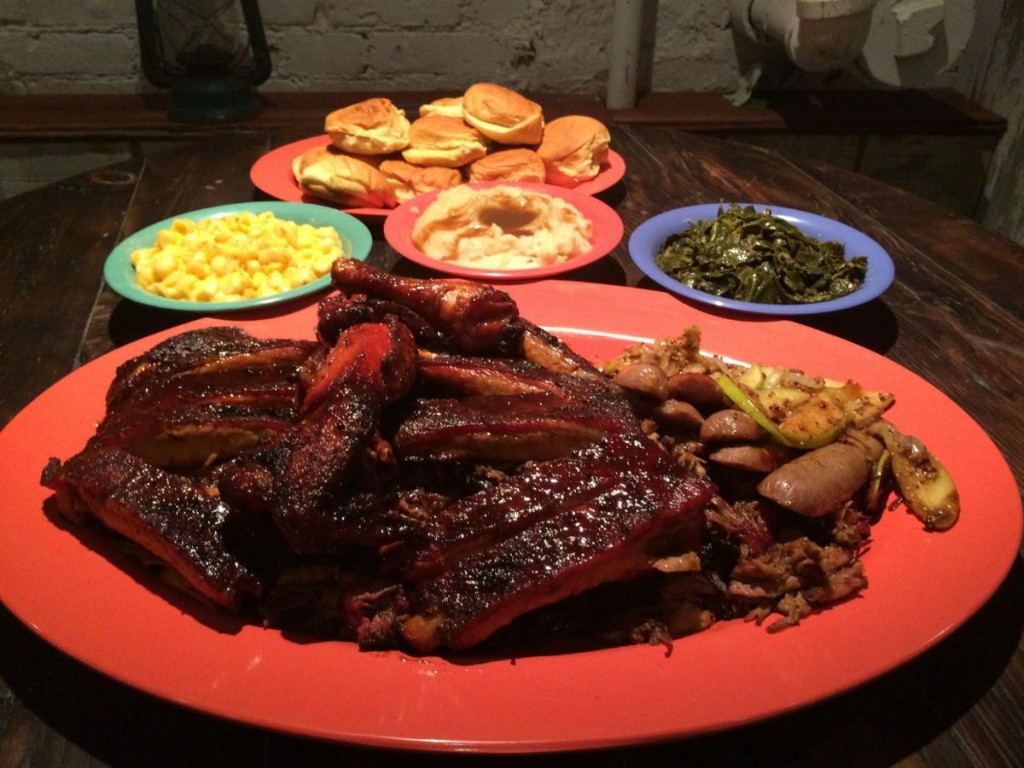 After ordering up a pint of Blue Moon (I know it’s not craft but I love it and can’t get it in Canada), I decided to go with the two meat sampler plate: brisket and baby back ribs with sweet corn souffle and mac & cheese for my sides. It was everything I had hoped for. The brisket just about fell apart as I tried to spear it with my fork and the sauce was finger-licking good. I’m not a regular eater of ribs but I really enjoyed these ones. Lots of meat and not hard to get off the bone. Worth the mess.

The Jays won and I was just short of needing to be rolled back to the apartment, I was that full of bbq. It was a good night. 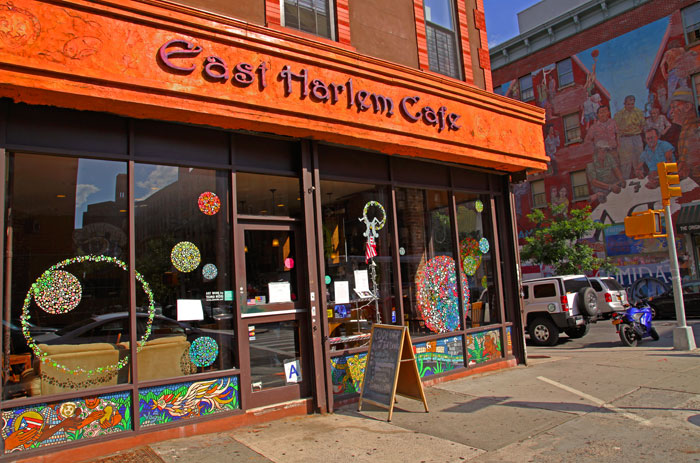 The East Harlem Cafe was a Google map find. We were looking for a nearby place where we could find a late breakfast or light lunch with good coffee. While this one ended up being 16 streets away, it was a beautiful day for a stroll. On the way there we discovered that Manhattan has a hill!

The menu wasn’t extensive but it had everything we were looking for: breakfast sandwiches, regular sandwiches, iced coffee, and Americanos. The sandwiches were reasonably priced for the generous size of them  (and on really tasty bread) and the coffee hit the spot. I liked the funky, artsy vibe of the place and would hit it up again if I were in the neighbourhood. 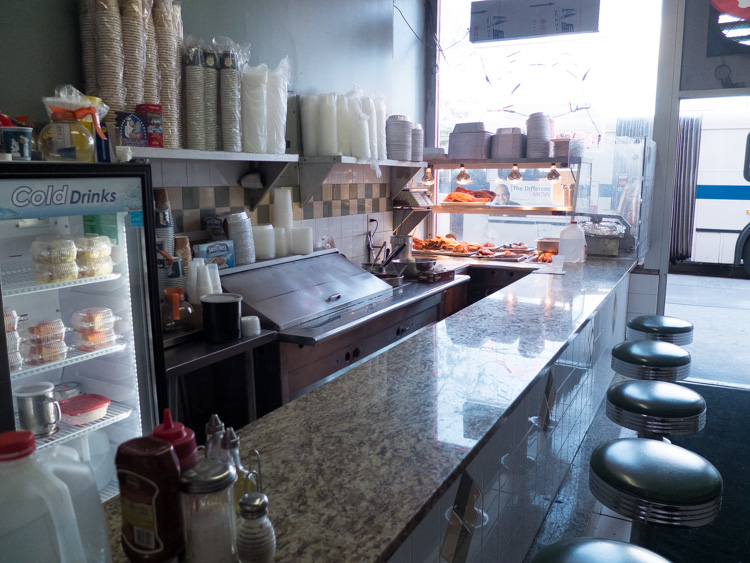 The rice and beans I’ve been looking for.

Ever since my trip to Puerto Rico in spring 2014 I’ve been longing for Puerto Rican style rice and beans, swimming in that delicious sauce. I hit the jackpot in Spanish Harlem.

I went to Yelp to find Lechonera La Isla. I saw photos of plates heaped high with those glorious rice and beans, glowing reviews, and low prices. Sold. It turned out to be a very tiny lunch counter near the Willis Avenue Bridge. Everyone spoke Spanish and seemed to be a regular (I didn’t see a menu anywhere), but I knew what I wanted.

The plate full of yum was served up along with a cup and a serve-yourself gallon jug of water. I sat at the end of the counter and observed the scene while I ate. It seemed to be a busy takeout spot, with locals coming and going with foil containers stuffed with pork. I think the owners might’ve been amused by the white girl tucking into the rice and beans with gusto.

And that huge plate? Came to $8. Beauty. If I find myself in East Harlem again I will definitely be going for seconds…and then fall into a food coma.

I didn’t actually get a chance to eat at Mama’s Restaurant but I’ve been told that if you like Jamaican jerk chicken, this is the place to go. It was literally a stone’s throw from our apartment but BBQ and pizza won out for the two dinners we were in town. Next time Mama’s…next time.

Have you ever spent time in East Harlem? What restaurant would you recommend?