What I’ve Been Doing While I Can’t Travel 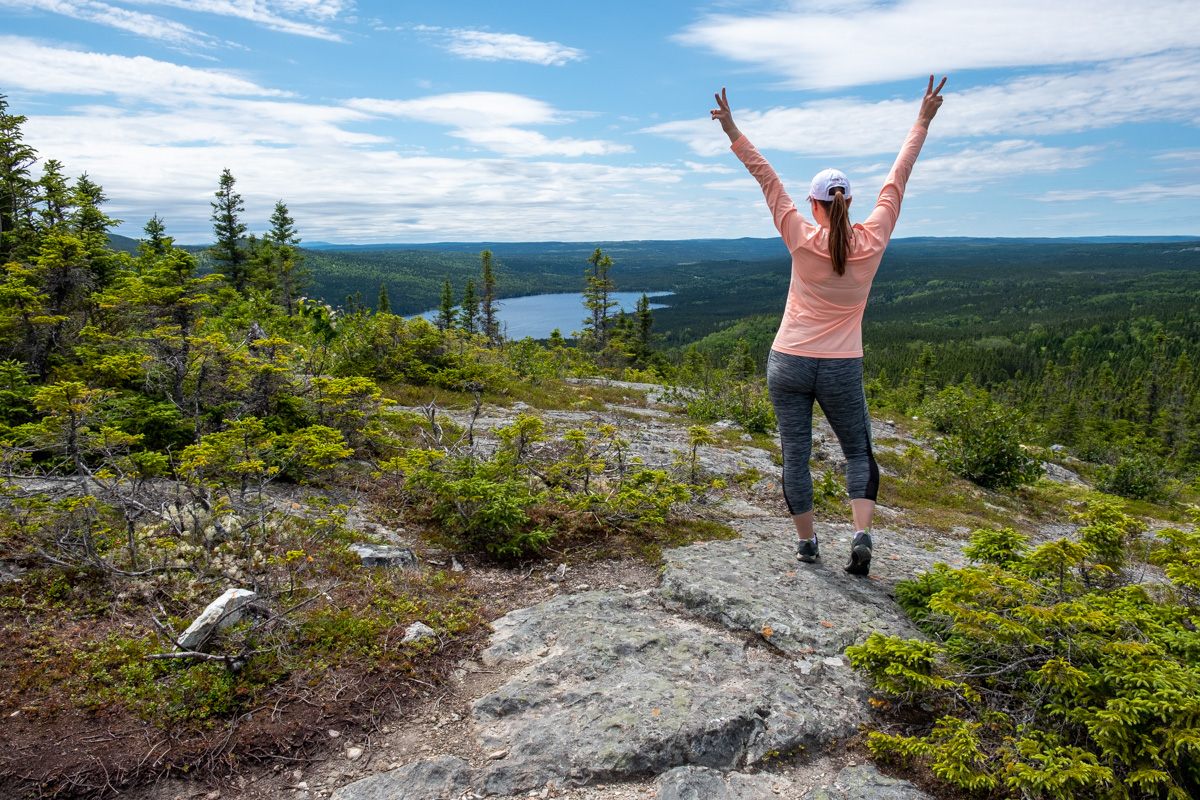 It’s been a hot minute since I shared a new travel story here hasn’t it?

Covid-19 has been wreaking havoc all around the globe for these past few months. My spring trip to Alberta had to be put on the shelf and any thoughts I had for international travel in 2020 have been paused. At this point, I’m not quite sure when I’ll be getting on a plane again.

I’ve been spending a lot more time in my house these past few months and honestly, I’ve been doing ok. I might, in fact, be too well suited to the hermit homebody lifestyle. I’ve tackled some home projects that have been on my list for ages and started a few new habits while I’ve been at it. Not to mention that I’ve picked up an unexpected roommate along the way.

You might remember that my friend had to make an unexpected return to Canada after getting stuck in Cambodia, locked out of his teaching job in China. So I spent his two week quarantine by myself at Kilmory Resort. We even made the local news for the whole thing. Over four months later and the Chinese border is still closed, so I have a new roommate.

Since I first moved out of my parents house in my early 20s I’ve probably lived alone more than I’ve ever lived with someone but I’m enjoying having another human in the house right now. Is it just me or is cooking more enjoyable when you’re sharing a meal? 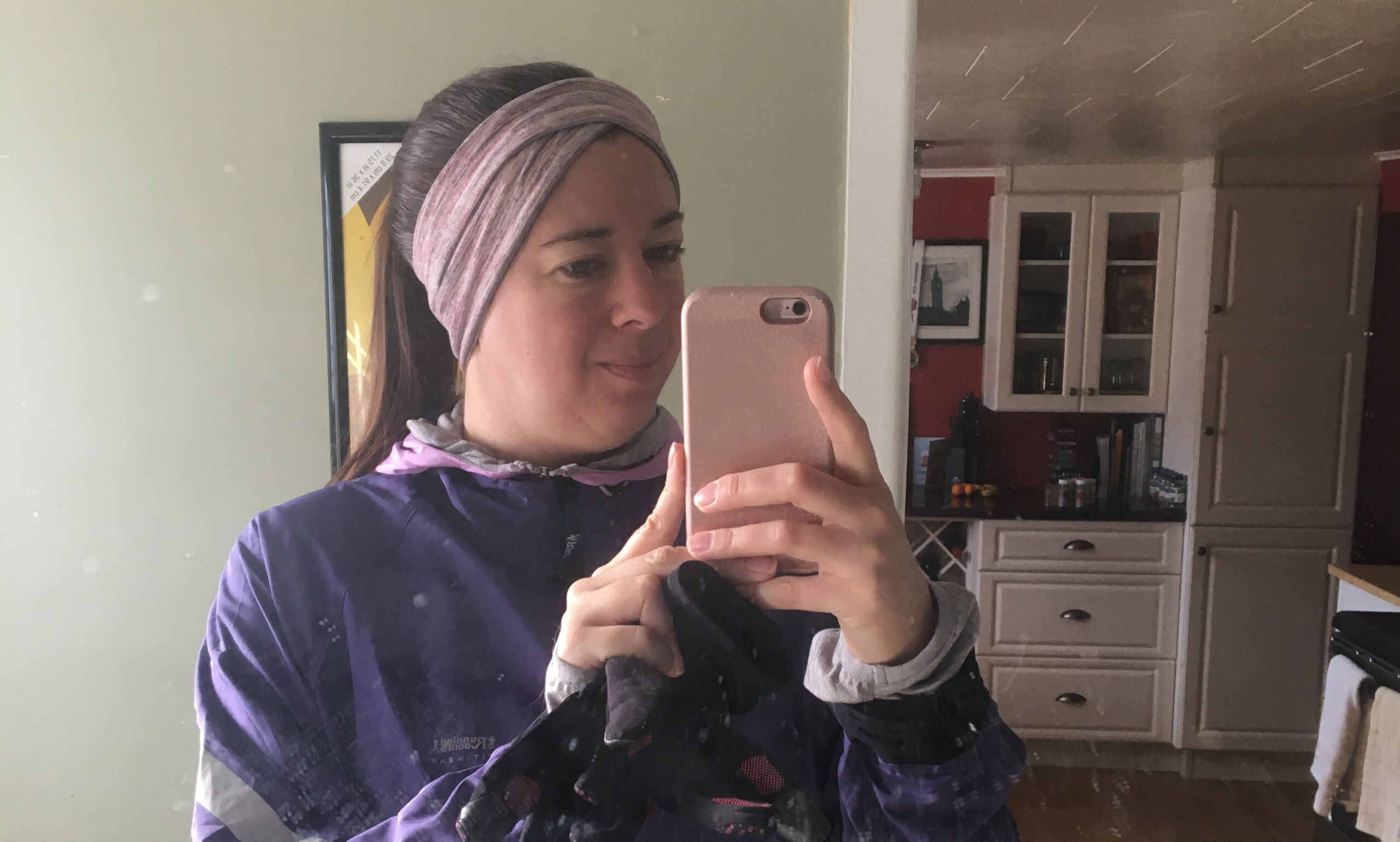 All bundled up for a cool April morning walk in St. John’s.

One habit that we started was early morning walks around the neighbourhood. We started with 4k at 8am but have been, bit by bit, pushing them earlier and longer. Even though it was often only 3 degrees at 7am in May it was a great way to start the day, with movement and fresh air. Every day we walked, I knew that if I did nothing else in my day, at least I accomplished that. I read how Adventurous Kate walked every street in her hometown during lockdown and it made me think that I should start mapping all the streets I’ve walked in the past few months. 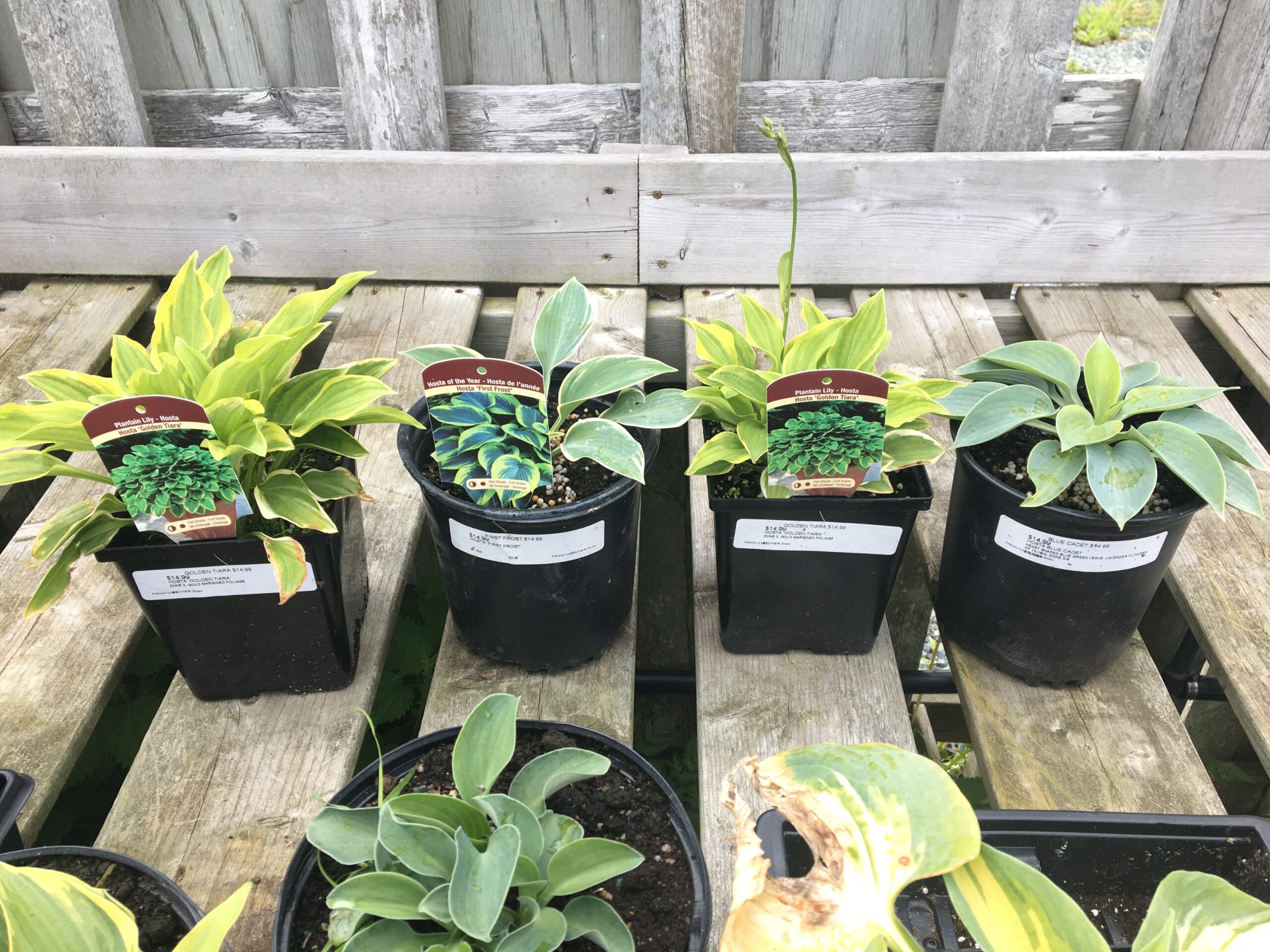 I’ll admit, I’ve been fortunate enough that my day job has remained steady during the pandemic. One great thing about working for a digital marketing company is that everything we do can be done online and from home. So I’ve been earning a regular pay cheque, but spending less on things like gas, takeout, and lunchtime shopping trips. I’ve been enjoying those little savings, though I also may have spent that Tim Hortons money on new houseplants.

In fact, I’ve kind of gotten addicted to not buying things. I can’t count the number of times that I’ve surfed the website of a clothing store and even added things to the cart but then clicked away. I just can’t seem to bring myself to buy new summer clothes when I hardly leave my house. It’s been over six months since I bought any clothes or shoes and that’s definitely a record for me. My single “pandemic purchase” was a ukelele. I’ve learned to play four chords so I’m basically ready to start booking gigs now. 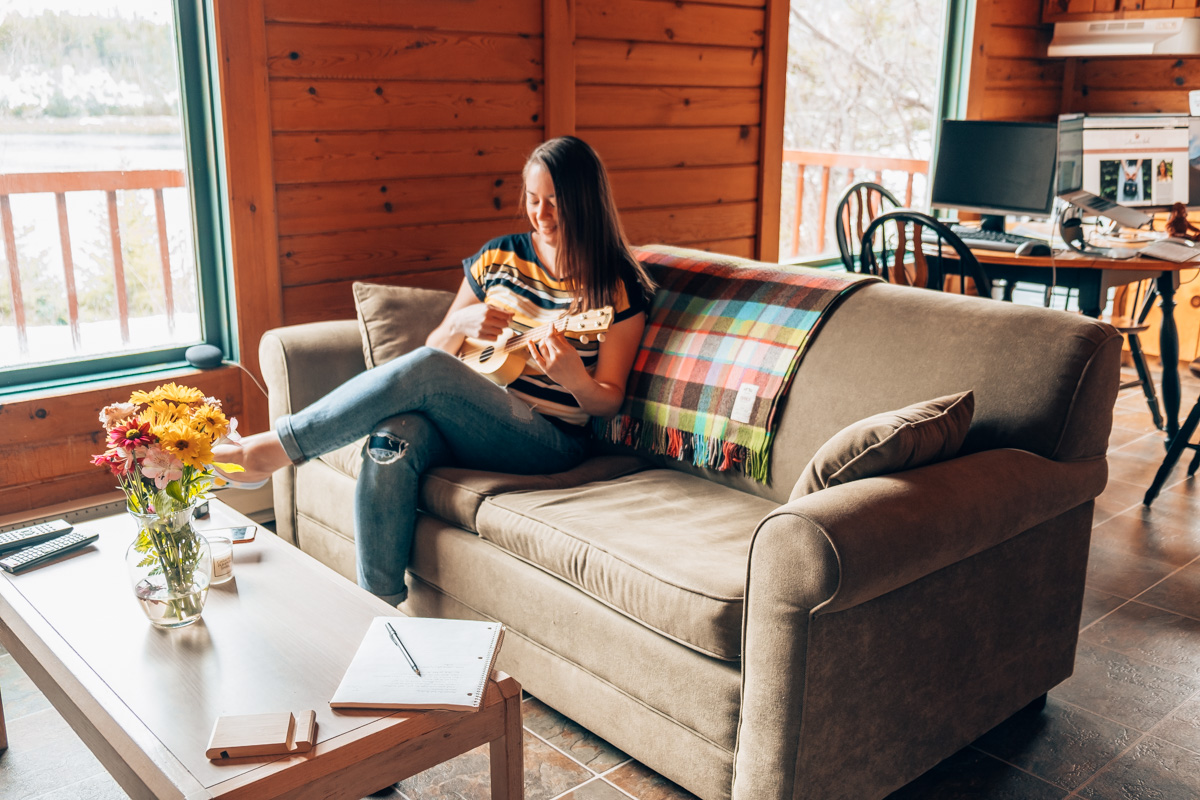 It feels like people’s pandemic response has come in waves. First it was baking bread. I saw loaves and loaves of white bread and sourdough fill my social media timelines. I eventually caved and tried to make my own sourdough starter. I fed it for days but it never turned out right so I ditched it and instead focussed on recreating and adapting my dad’s banana bread recipe. Banana chocolate chip walnut muffins are now my thing. 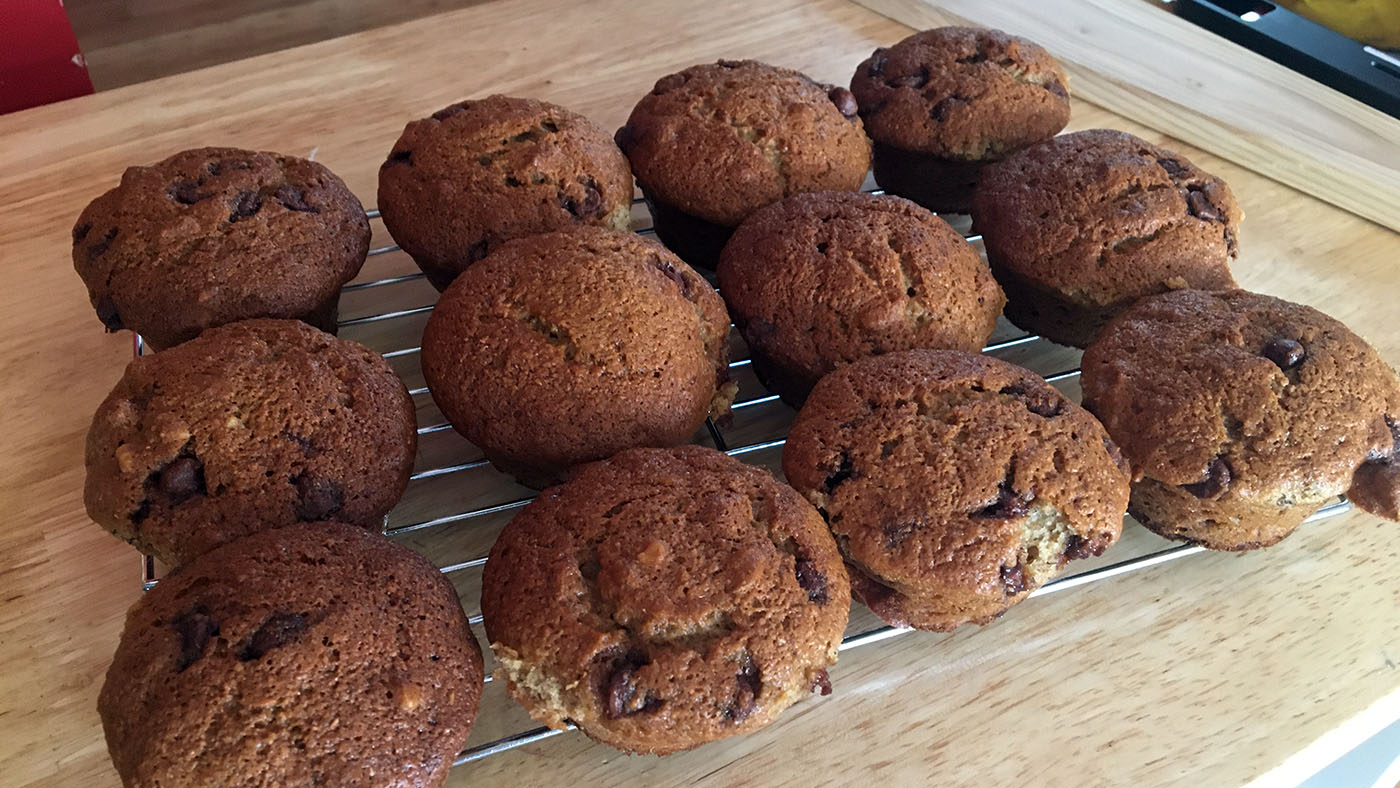 Then it was gardening. Some of the hottest tickets in stores in 2020 have to be yeast, flour, and potting mix. I caved to this phase too and my friend and I planned out a small garden in my backyard. He’d build the raised bed and haul the soil while I planted and tended the seedlings in my sunny office.

This stuff is addictive. I got so much joy out of watching the daily changes. Just the other day I clapped in excitement when I saw that our newly planted radishes had sprouted. We’ve filled the garden bed and then some. I couldn’t bring myself to kill my extra zucchini babies so we bought another planter. Then we couldn’t resist the siren song of half-priced tomato plants so now we’re buying more planters. But the thought of being able to grow enough to even make one salad is pretty rewarding. 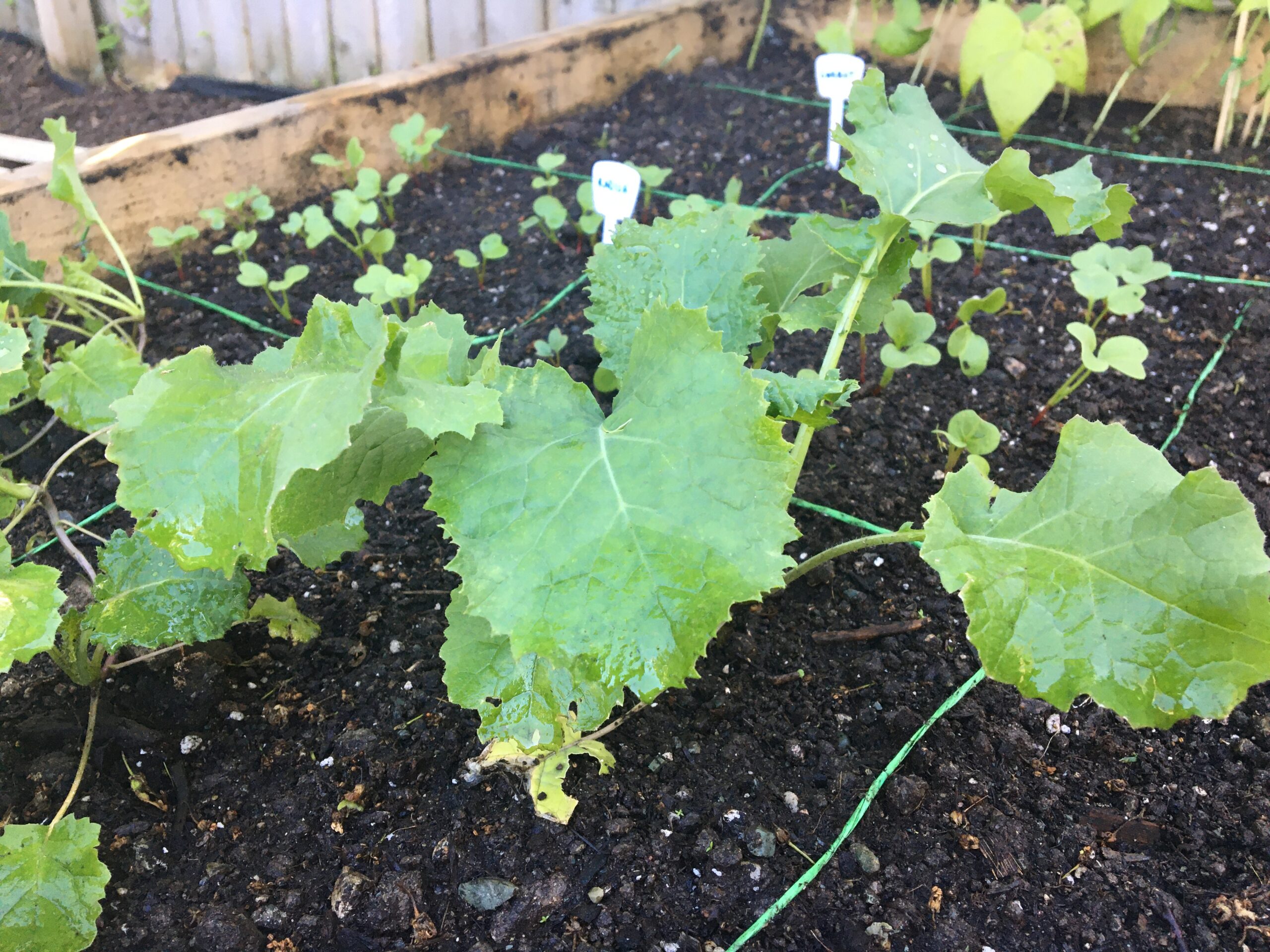 I also decided that I wanted to learn to crochet. My mother tried to teach me years ago but it never stuck. I already knit so I thought this might be a nice change. I spent two days on YouTube and basically learned enough to make a granny square, which I’m pretty proud of, but now I’m not sure what to do next. If inspiration hits, I’ll pick it up again I’m sure. 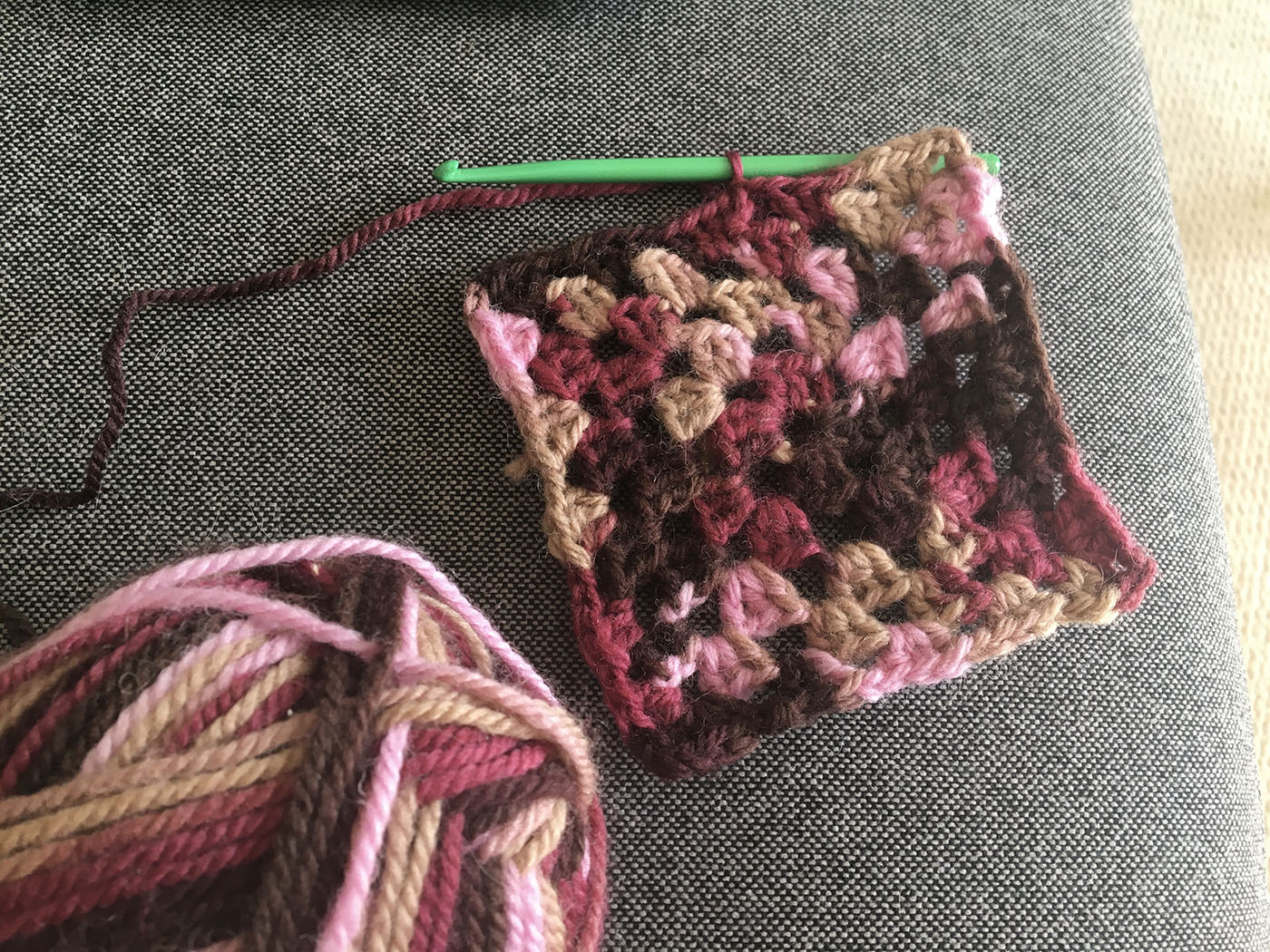 Spending so much time in my house this spring has also made me hyper aware of just how much stuff I actually own. More than I need for sure. For a while I’ve wanted to pare down but it always seemed so daunting that I never started. I sometimes have an emotional attachment to things so it can be hard for me to give things away or even worse, throw them out. Paper clutter was one of the biggest challenges, but in a burst of motivation I finally managed to get rid of years and years of unnecessary paper. I feel a bit lighter with everything that I purge from my house.

Today I even found my very first cell phone hidden away in the bottom of a drawer in my office – a Nokia from 2001. Why on earth am I still holding on to an almost 20 year old phone? Now.. should I send it to a museum or just pitch it in the electronics recycling pile?

I’m taking this paring down approach to all areas of my house, including my hotel toiletry stash. Whenever I stayed at a hotel with little bottles of shampoos and soaps, I would pack them into my suitcase. “They’ll be handy next time I travel,” I’d think. Except that next time I travelled I’d either use my GoToob bottles or I’d be staying at a hotel that provided little bottles of shampoo. Later, rinse, repeat.

So I went through my collection of shampoos and just decanted them all into one larger bottle. Figured if I wasn’t leaving my house it was a good time to just use up the random products. The only product that I have that might just be tossed is the lotions. Hotel lotions are never that great and I don’t use a lot of hand lotion anyway. Do you think hotels will start offering little bottles of hand sanitizer now instead?

What else have I been up to the past few months while I haven’t been travelling? Oh yeah, I started another website! I’ve been toying with the idea of starting a nice site for awhile now and, despite the fact that people aren’t really researching travel right now, this seemed like a good time to get it off the ground. Trust me on this.

Atlantic Traveller is a travel resource site focussed on travel in Canada’s four Atlantic provinces: Nova Scotia, New Brunswick, PEI, and Newfoundland and Labrador. We’re all more actively planning staycations this summer so I’ve been pleasantly surprised by the warm response. It’s been fun to work on something so near and dear to my heart as well. I love my Atlantic Canada home.

Like just about everyone, I’ve had plenty of moments of fear, uncertainty, and anxiety around this whole pandemic. Who wouldn’t? I also worry that I might be going through a little post-quarantine anxiety now because it causes me stress to see people pack stores without wearing masks and the idea of being in any kind of crowd makes my brain itch. But for the most part, I’ve been weathering this weird, weird time pretty well.

Travel is not completely off my radar though. I’ve been daydreaming about what kind of trips I may take in the future when it’s safer to do so. Maybe some longer term remote working? Spending winter in Bali does sound dreamy…

But for now I’m enjoying my little corner of the globe. The rest of the world will still be out there once we’re able to travel again.