We All Come From Away 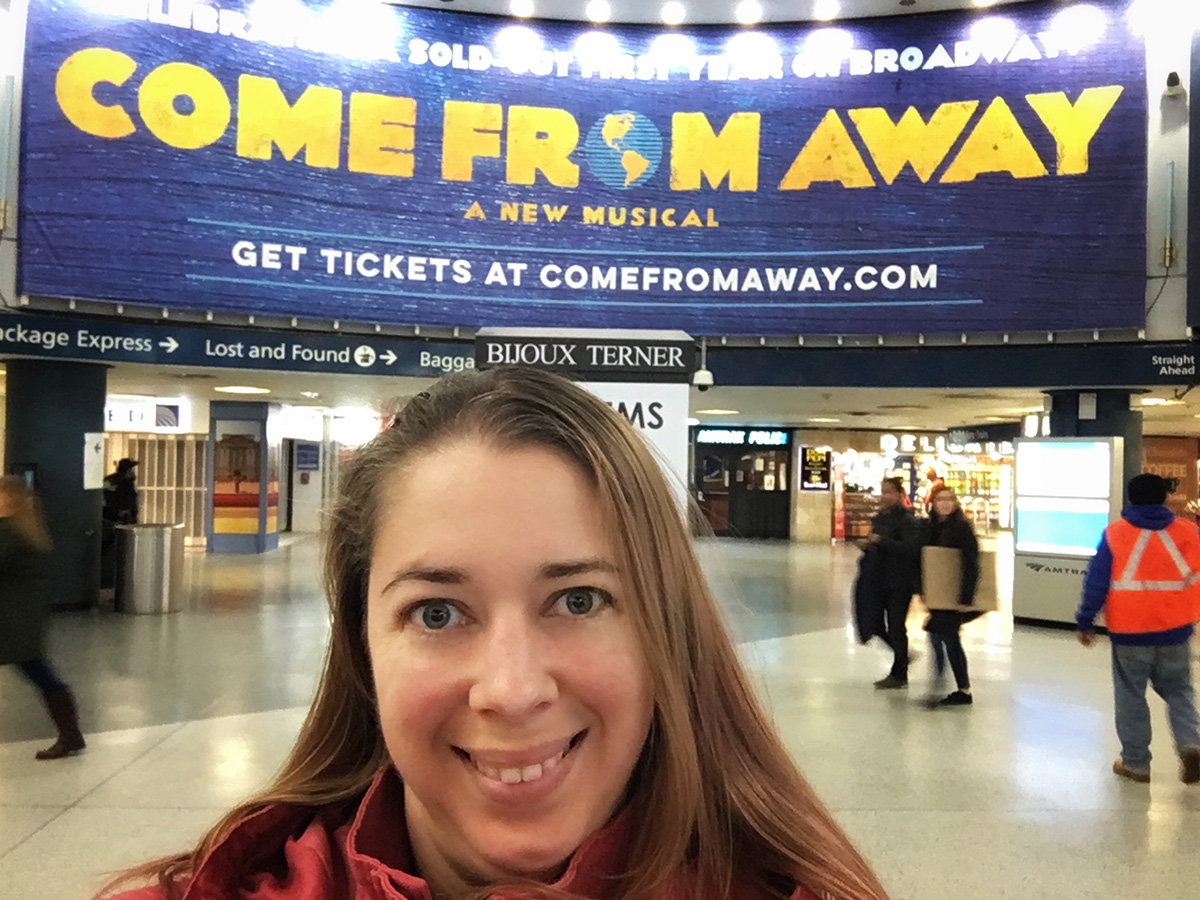 Finding Kindness and Home in the Middle of Manhattan

Not 90 seconds into the show and I was already wiping my eyes and choking back tears. I wasn’t sad though. Instead it was pride leaking out of my eyes. I was home in the middle of Manhattan.

On the northeast tip of North America, on an island called Newfoundland, there’s an airport. It used to be one of the biggest airports in the world. And next to it is a town, called Gander. And by now, you’ve likely heard of the hit Broadway musical, Come From Away, based on the events that happened in Gander in the five days after the terrorist attacks in New York on September 11, 2001.

It might sound odd at first to create a musical based on 9/11, but once you see it, you’ll realize that that’s not really what Come From Away is about. When US airspace was closed, 38 planes carrying almost 7,000 passengers (and 19 animals) landed in the town of 9,000. With only 500 hotel rooms available, residents immediately went into action opening up church halls, schools, community centres, and their own homes to look after those stranded. They cooked meals, collected bedding, clothes, and toiletries, and brought strangers into their homes for showers and hot meals. The local hockey rink was even turned into a giant walk in refrigerator for all the food.

To the townsfolk, at the time, I’m sure it felt like the most natural thing. This awful thing had happened and people were scared and alone so you step in to help them in whatever way you were able. To survive in rural Newfoundland often means relying on your neighbours. They had no idea what kind of impact these seemingly simple acts of kindness would have on someone’s life. It’s a message we need now, maybe more than ever. Come From Away celebrates the good things that were found in the midst of a tragedy: kindness, friendship, even love. The show is a reminder of the capacity for human kindness even in life’s darkest hours.

Passengers of Delta Airlines Flight 15 were housed in the nearby town of Lewisporte and were so moved by the kindness of the people there that they set up a scholarship for students at Lewisporte Collegiate. It’s now worth over $1.5 million and has helped dozens of kids attend university. Since that day, Kevin Tuerff (who is portrayed by Chad Kimball in the show) closes his office every September 11th and gives each of his employees $100 to do random good deeds for strangers. The ripples of kindness continue on even though almost 17 years have passed. 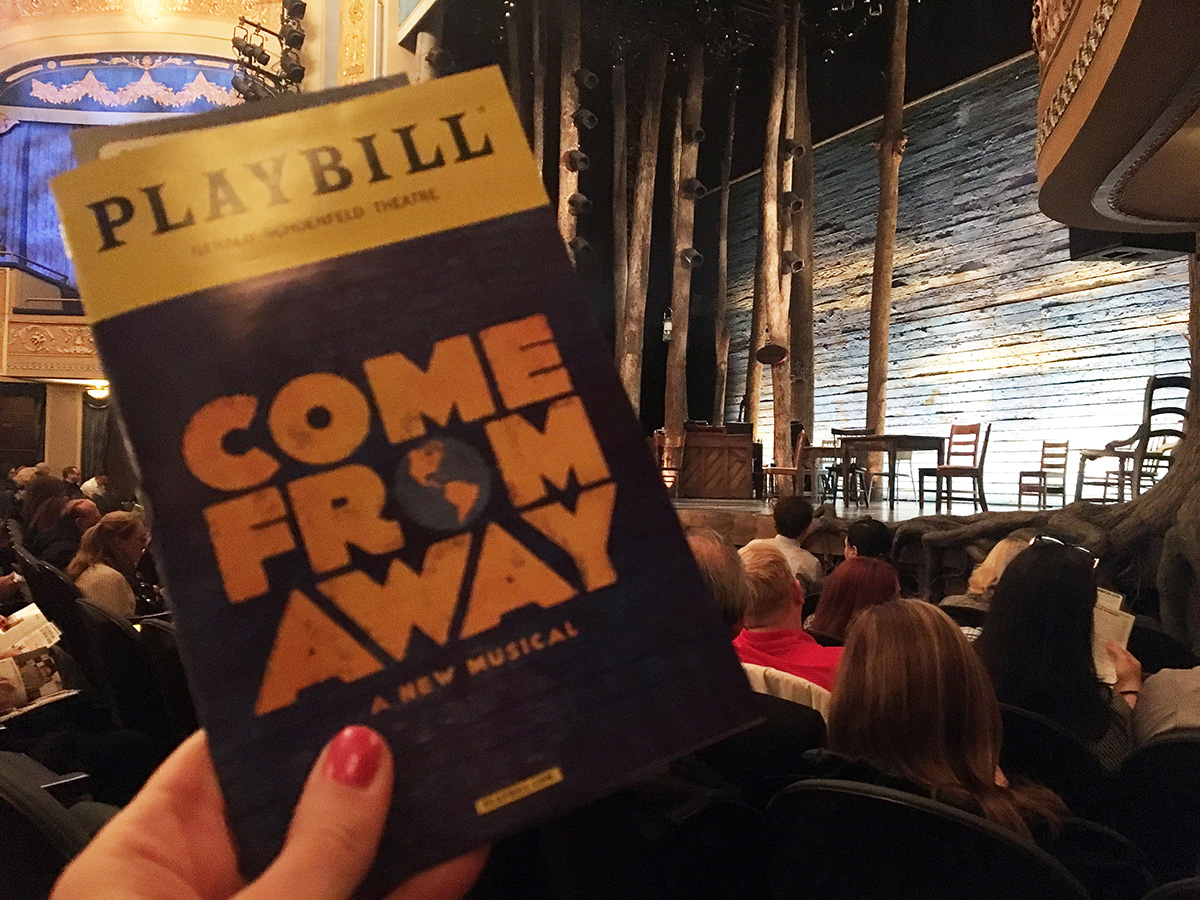 Living in St. John’s, I’d heard about the musical when it was still in its infancy at the La Jolla Playhouse in California in 2013. Bob Hallett, one of the members of my one-time favourite band Great Big Sea, was a musical consultant with the show, and kept us all up to date on Twitter. We’d had a Newfoundlander on Broadway before (Tina Maddigan in Mama Mia) but there’d never been a Newfoundland story on Broadway and I was cheering for it to make it all the way to the Great White Way.

When your family comes from a place as relatively unknown on the global stage as Newfoundland, you never think that someday you’ll be able to sit in a Broadway theatre and watch a show all about home. I can only imagine what people form Gander itself feel. To see it debut, and do so well made me proud. Now all I had to do was get myself there to see it for myself.

The opportunity came in April when I took myself on a little four day trip to New York a week before my birthday. The Blue Jays were in town and it just seemed like the perfect timing. The routinely show sells out but I managed to get myself a great seat in the orchestra (perks of solo travel!) just a week or two before. The grand folks from Adventure Central even managed to arrange for me to do a little meet ‘n greet with the cast afterwards. I was pumped. I should’ve brought tissues though.

I’ve seen a few Broadway musicals by now and Come From Away can stand shoulder to shoulder with any of them. The stage is sparsely set with a large back wall of weathered blue wood siding, which could be the side of any house or shed in any outport in Newfoundland, a few large timbers (the trees are real, fyi), a dozen chairs, and two tables. The simplicity of the staging really puts the emphasis squarely on the story. Don’t be fooled though, the simple set doesn’t mean boring. Those 12 chairs and two tables get turned into everything from airplanes, buses, pubs, and of course, a Tim Hortons. This is Canada after all. The dozen actors portray at least five times as many characters seamlessly switching mannerisms and accents like the true pros they are. I was worried about the accents.

Newfoundland has many, many different accents depending on which bay or cove you grew up on and Hollywood actors have had a hard time getting it just right. Just ask Julianne Moore when she filmed The Shipping News. She never did figure it out. It’s not quite Irish, not quite Canadian, with a whole vocabulary of our own. We’ll notice if you’re off. The Broadway cast of Come From Away have nothing to worry about. They did a fantastic job with the dialect. Like, a stunningly good job with the accent. 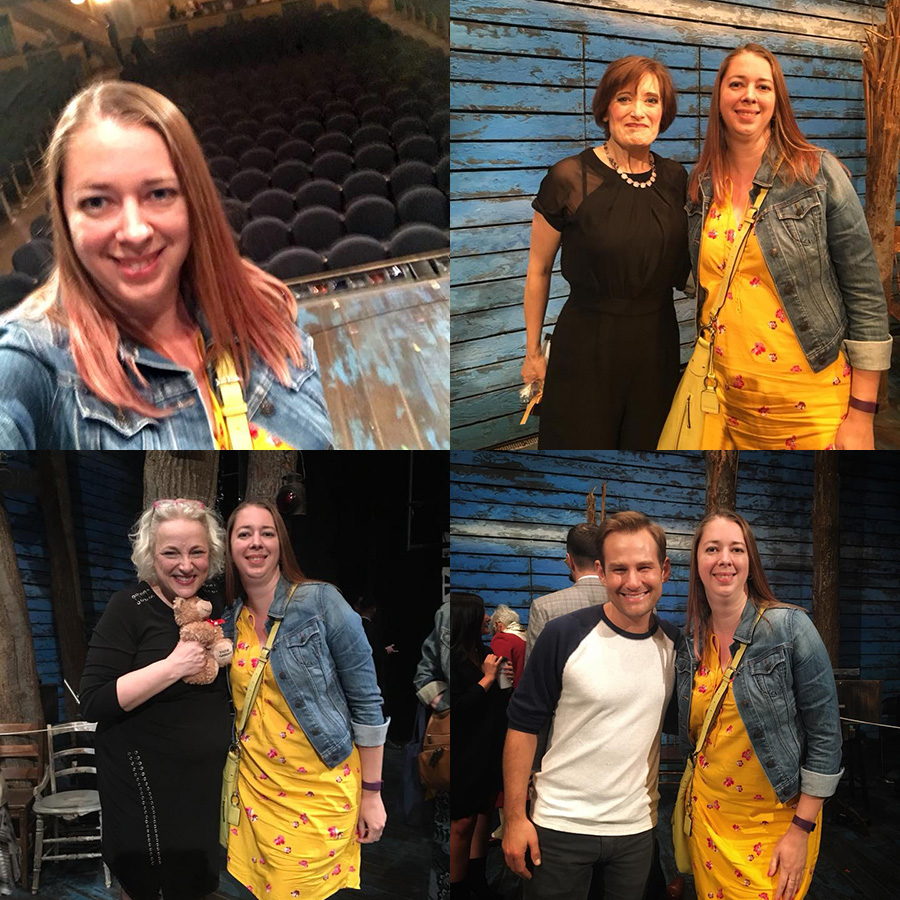 Getting to go backstage (which is really on stage) after the show was a really special treat. I was a cast member of my high school musicals and when I was 15 thought it would be the greatest thing ever to be a dancer on Broadway. So I seized my moment and did a few little steps to a theatre of empty seats in between meeting people. I can now forever say I’ve danced on Broadway. I also had to perpetuate a few regional stereotypes that all Newfoundlanders know each other as I do indeed know people in common with Petrina Bromley, the one real Newfoundlander in the show, and musician Romano Di Nillo. What can I say…it’s a small place.

Why Not Visit Gander Yourself

Come From Away has inspired Newfoundlanders to travel to New York but it’s also inspired Americans to travel to Gander to see where this story actually took place. The town recognized the potential here and wanted to ensure that visitors got what they were looking for, with stories told in a respectful and compassionate way. Beyond Words Tour – A Come From Away Experience is a tour of Gander, showcasing some of the key locals, places, and events of the week of 9/11/2001 in Gander. The tour takes you to the Gander International Airport, Gander Town Hall, an exclusive mini exhibit, and driving tour around key areas of the town (including that walk-in refrigerator ice rink). You may even get to meet one of the real life people that a Come From Away character was based on. Did you know, Gander is the one place outside of the United States to share a piece of the World Trade Centre? If you visit the area I also recommend making a trip to the Dover Fault lookout.

The night after the show I found myself at Ground Zero aimlessly walking around thinking about the importance of kindness especially when times are dark. I promised myself that I would try to actively be kinder and look for those moments to help others.