I could feel my feet heating up inside my hiking sneakers as they dug into the side of the volcano, trying to maintain some control over my downward speed. Dust and rocks kicked up into a cloud around me as I hurtled down the side of Cerro Negro, the youngest active volcano in Nicaragua. Some horrific accident? Nope, I signed up for this.

Volcano boarding has only been around for about a decade but it’s quickly grown in popularity. But what the hell is volcano boarding? You hike 700 meters up to the top of the Cerro Negro volcano, then suit up in a protective suit, goggles, gloves, and face mask. You sit on your board, similar to a toboggan but with a metal bottom and a piece of formica under your rear, grab the rope handle and push off, down a slope so steep that you can’t see the bottom of it, and hope you don’t crash. A bit crazy? Sure. 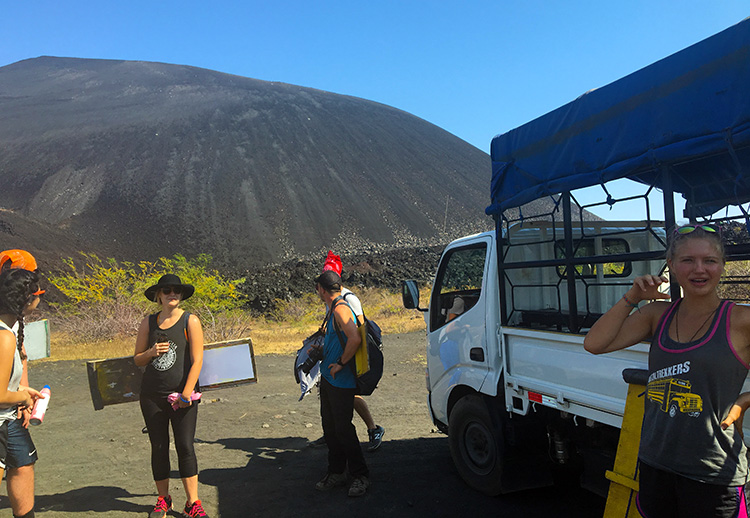 There’s only one place in the world where you can do it and that’s 45 minutes outside of León, Nicaragua. It was the one must-do activity on my itinerary. I actually planned my route around it, leaving it for the end of my trip. I figured, if I hurt myself, I’d be on my way back to New York the next day or day after. Maybe not the best logic. The thing is, volcano boarding is considered an extreme sport by my travel insurance and specifically excluded from coverage. Turns out, by the time I reached Leon, I was already pretty beat up between a nasty sunburn and surfing injuries.

If you want to go boarding, there are no shortage of tour options in León. I chose to go with Queztzeltrekkers since I liked their social consciousness. Profits from their treks go back to the community to help the kids of León. I also liked that if you went with the morning group, you had the option to go down twice, though they also have a sunset outing that sounds really good. $30USD gets you transportation to and from the volcano, 2L of water, the option for two runs, snack, and veggie burrito lunch.

To Go Down, You First Have To Go Up 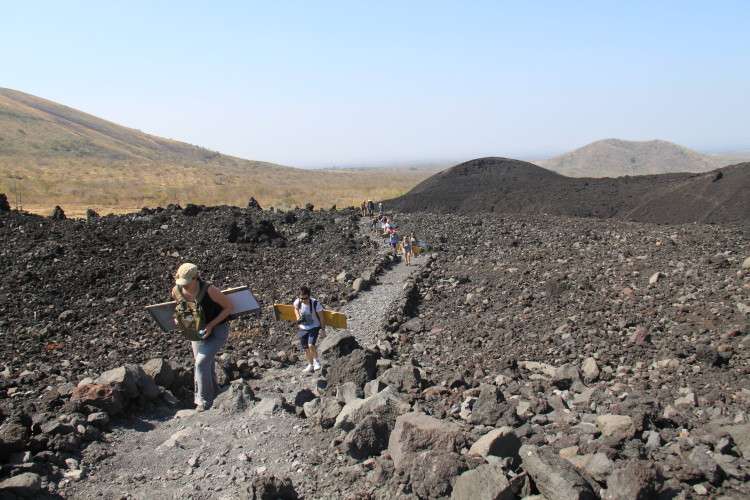 But before you can slide down the volcano, you have to get to the top of it, while carrying your water, protective gear and board. All in all, it’s probably about 20lb of gear. I thought I was in better shape but the hike up really kicked my ass. I was also stupidly carrying my daypack with more water, sunscreen, antibacterial wipes, camera, and a few other odds and ends. I could’ve packed the sunscreen and wipes into my gear bag and done without the rest but that would’ve been the smart thing to do. :P

I’d like to think that the 37C heat and the fact that I was dealing with swollen and blistered legs from a really bad sunburn and a busted up knee from surfing attributed to my wussiness. But about halfway up I was really struggling so one of our guides was super nice and took my gear for me. My saviour. 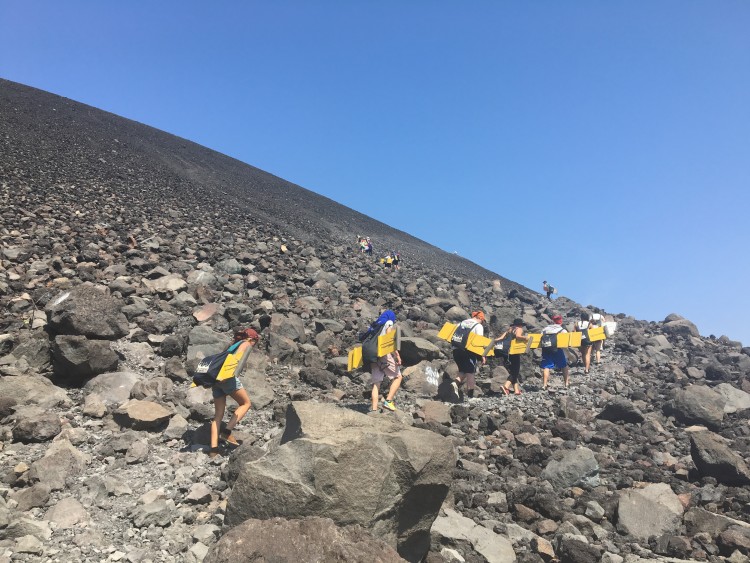 How long it takes to get to the top will really depend on how many are in your group and their overall fitness. Small, athletic groups could make it up in about 25 minutes. Our larger, mixed group took about 45. At the top we took a little breather and made a little detour to go look down into one of the craters. It’s not everyday you get to stare into the heart of a volcano. 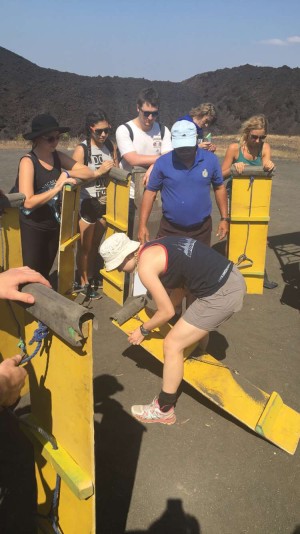 Although the volcano hasn’t erupted since 1999 they’re predicting that another large eruption will happen in the near future. Nearby Telica had a small eruption just days before I arrived in town so the area has been active lately. Our guides told us that as long as the volcano keeps letting off steam, all should be good. Once it stops that’s an indication that pressure is building up and that could be dangerous. At the crater’s edge, if you push back a little dirt, the ground feels like a hot water bottle. But at least on this day, there was no eruption.

“Sit on the back of the board. Hold the rope. It’s just for stability, there’s no steering. Keep your feet to the sides. If you want to go faster lean back, slower, lean forward. If you really want to go fast, put your feet on your board. But if you do, do not put them back down. I repeat, do not put your feet back down.” Our guide gave us these instructions both at the bottom and the top of the volcano. Putting your feet up is a commitment to speed.

The hill starts off as a 40 degree angle and then drops off to 46 degrees. Trust me, that’s steep and it’s pretty intimidating when you’re standing at the top. I decided that I wanted to go down in the middle of the group. I wanted to see a few go down first and then I wanted to be able to watch a few from the bottom. Before I knew it, it was my turn. Once the guide waved the green flag I took a deep breath and pushed off. 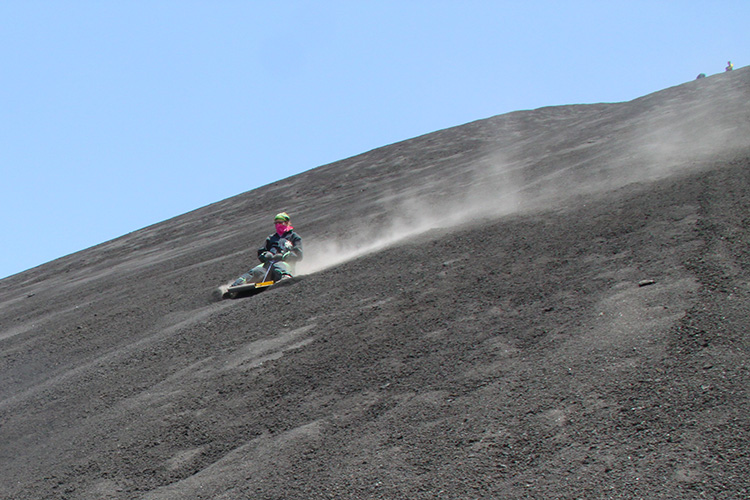 I, being the type of person who will ski down a black diamond hill but half in the snowplow to keep from going too fast, sat straight up, neither forward nor back. It took about 20 feet before I actually got sliding. And then I started picking up speed. I managed to find and maintain a good speed though I sometimes felt I was on the edge of control. If you go all out, you could reach speeds up to 70 km/h. No thank you. Some tour companies have a speed gun and have a competition to see you can go fastest (I think you win a t-shirt or something), but if you’ve never done it before, it’s a recipe for crashes. Quetzeltrekkers encourages to just go as fast as you feel comfortable with. They want you to have fun, above all.

I only picked my feet up and leaned back with about 100 feet of track left. Otherwise I dug my heels in the whole time, while my mind wavered between “Holy shit!” And “Whee!” 20 or 30 km/h would be fast enough for me! It was better than any sliding run I’d ever done. 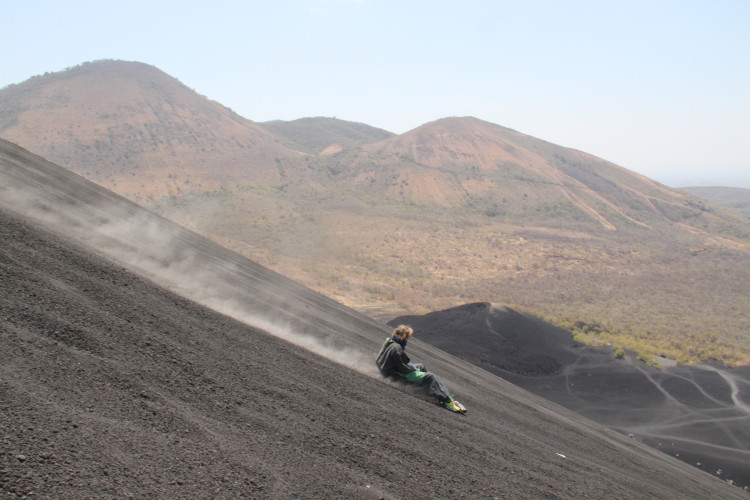 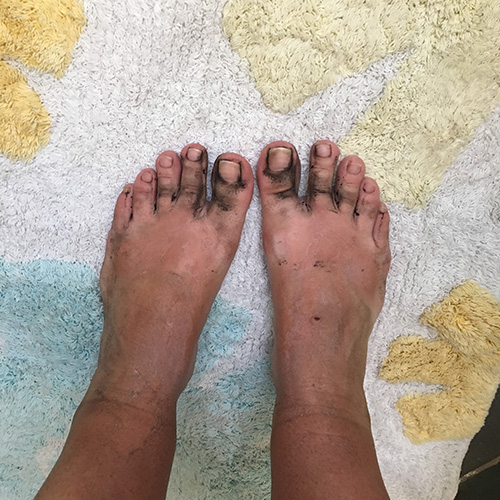 This is despite wearing socks and sneakers.

Volcano dust was everywhere! In my ears, up my nose, under my fingernails. Despite all the gear, my legs were grey up to my knees. When I got back to the hotel and took off my shoes and socks, even my toes were black! A shower never felt so good. I can only imagine the state of my teeth if I hadn’t worn a bandana, bank robber style.

Our group made it down without incident, except for one. An Irish girl in our group lost control about ⅔ of the way down and wiped out spectacularly, first rolling and then flipping end over end. It was scary to watch. Thankfully, she was able to walk off the hill, though scraped up, sore, and bleeding. She was going to be hurting for a little while, but would be alright. Nothing broken. 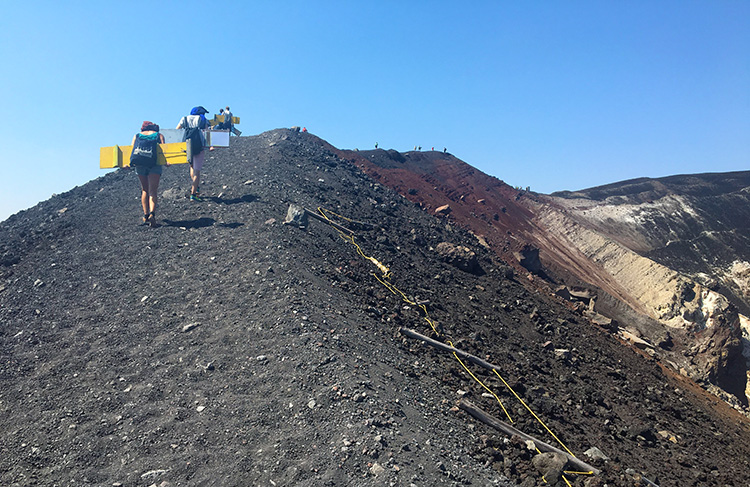 Only one person decided to go again, the rest of us headed to the ranger station for our veggie burrito lunch. I definitely would’ve gone for a second run if it hadn’t been for my legs. Even going down once probably wasn’t the smartest move considering the sun blisters I was dealing with, but I just couldn’t handle the hike back up again.

All in all, my volcano boarding experience exceeded my expectations and I feel like I’ve earned some badass travel cred by hurtling myself down the side of an active volcano on a toboggan.

Would you ever try volcano boarding?