Tubing on the San Marcos River near Austin, TX 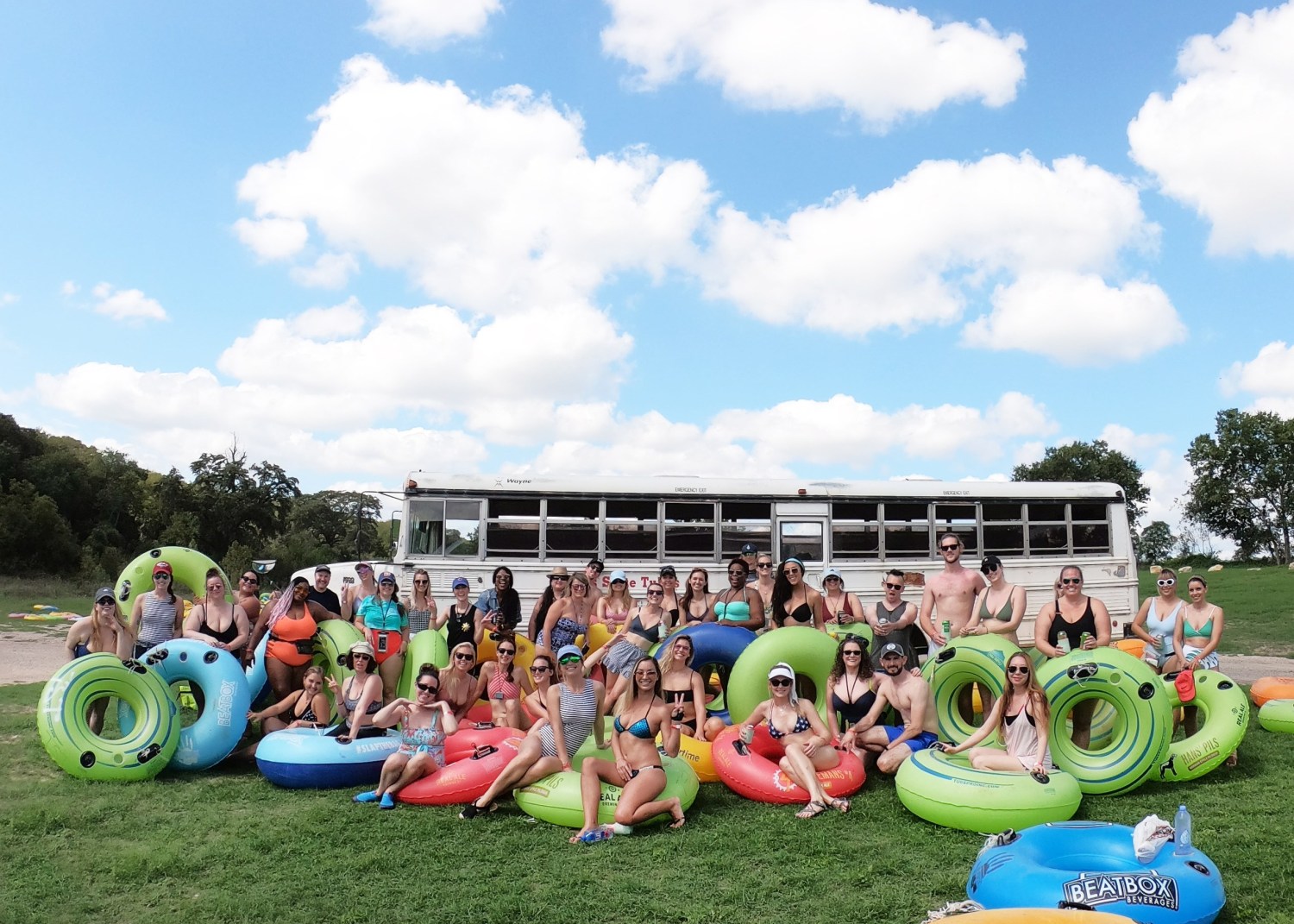 I was in Austin this past fall for the inaugural TravelCon travel media conference and more than any workshop or keynote, I was excited to meet people. New bloggers, established bloggers, and superstar bloggers alike. Blogging can often be a solo affair spent in coffee shops, on couches, or in home offices, so it’s always nice when you get a chance to hang out with other people who get what you’re doing. People who won’t roll their eyes or space out when you complain about the latest Instagram algorithm update, take a photo of your dinner, or debate the pros and cons of hiring a virtual assistant.

So when I saw an email pop up in my inbox saying that Kiersten Rich, aka The Blonde Abroad, would be hosting a meet-up pre-conference I was pumped. Aside from hanging out with arguably the most successful female travel blogger on the go, I’d get a chance to meet other like minded women. To top it off the meet up was an afternoon of river tubing on the San Marcos River just south of Austin. Win, win, win. 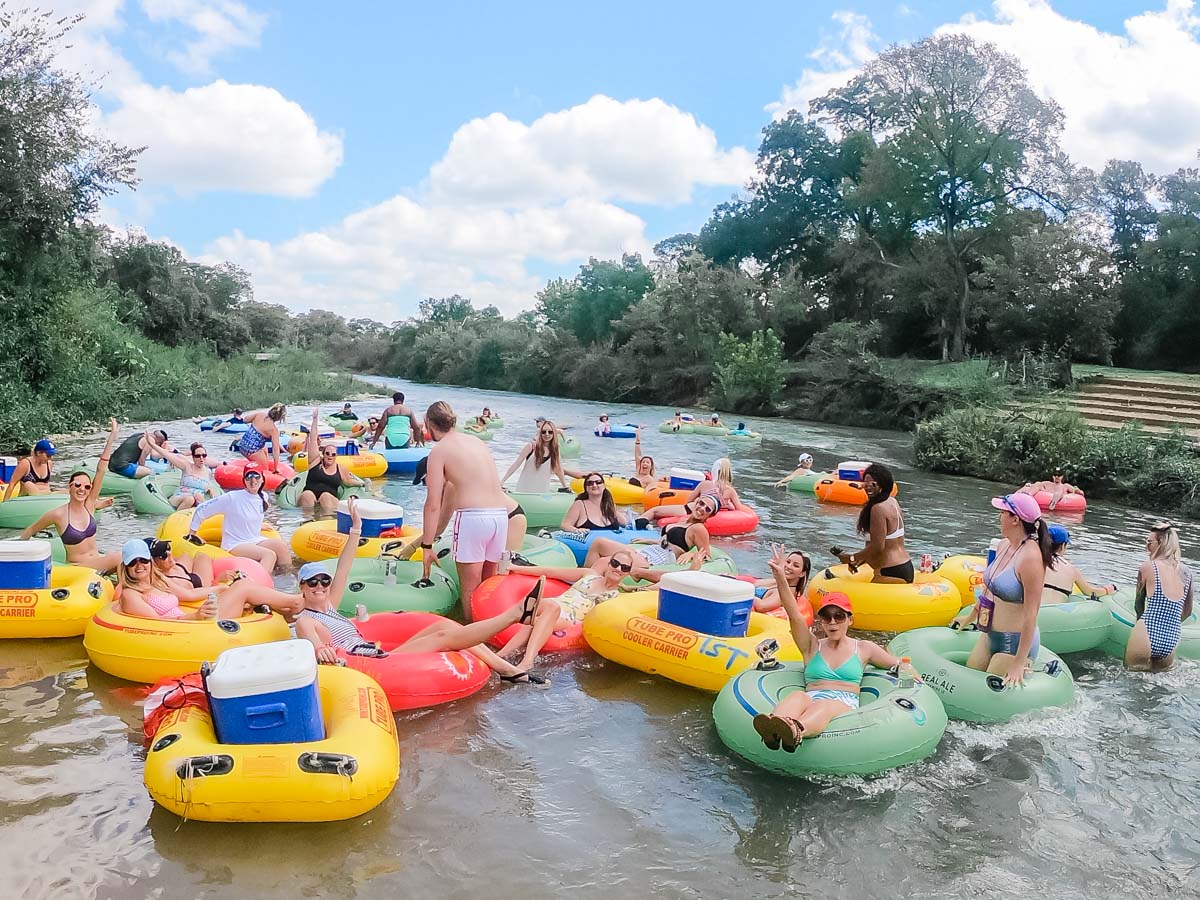 The San Marcos River is a spring-fed river which ensures that it stays a refreshing 72 all year round. It’s also some of the cleanest water you’ll find in Texas. There are two floating options: a short kid-friendly one mile float that goes through downtown San Marcos and then there’s the three hour float in a different section of river that tends to attract college students. When in Texas go big or go home, so we were doing the full three hours. 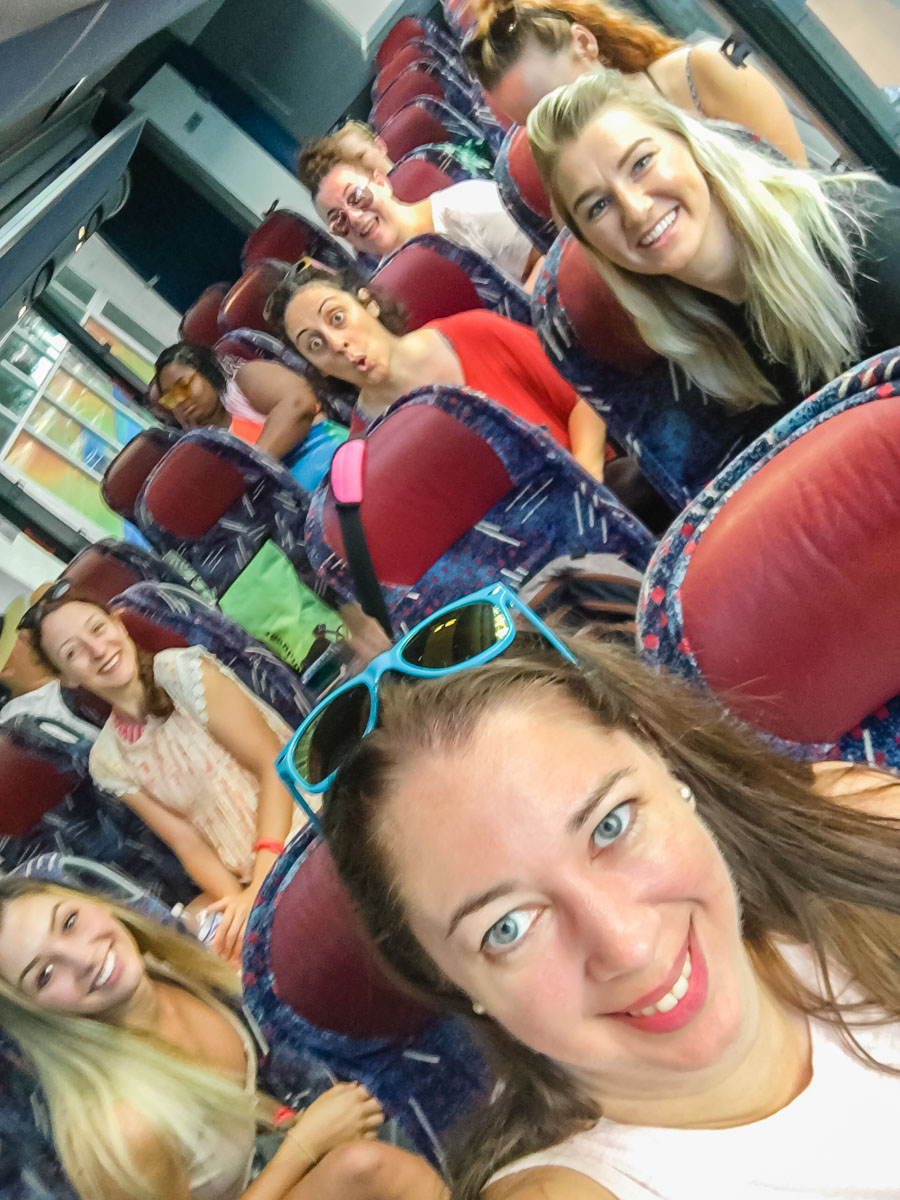 The day before TravelCon, about 50 women (and a few guys) met the ATXcursions bus in central Austin to make the hour long ride to the San Marcos River. The ATXcursions crew provided everything we needed for a fun afternoon of tubing, except our drinks. My hostel dormmate and new buddy Terri Ann and I had goofed and forgot to pick up provisions the day before (never mind that our hostel didn’t allow outside alcohol in) but Austin being Austin, we were able to find a shop open early enough for us to stock up.

Kiersten and her assistant Lauren showed up with donuts for us all just before we took off. Donuts and day drinking and floating down rivers in the Texas sun? Is there a better way to spend a day?

Normally there are no stops between Austin and San Marcos but part way there we convinced our guides to make an impromptu gas station stop because the group was collectively doubting whether we had enough alcohol to make it to the end of the afternoon. Pretty sure we bought out the station. Better safe than sober right?

You May Also Be Interested In:
Where to Stay in Austin, TX
Article Continues

Our ATXcursions guides gave us the rundown of how the day would go and what to expect. “We’re only going to need about 5% of your survival skills today. If you see something in the water that you might hit, just make your hands into little ice cream scoops. Then you’re going to get those little ice cream scoops in the water and paddle yourself away.” Throughout the afternoon calls of “Butts up!” would echo through the group if someone came across a shallow rock. It became our rallying cry. Team building through butt bruise avoidance.

We were each given a bright coloured inner tube and each cooler was given its own special floatie. Each cooler group elected a bartender who’s tube would be tied to the cooler float. We all started off the excursion thinking we could easily stay close to our coolers.

But the river had other ideas. 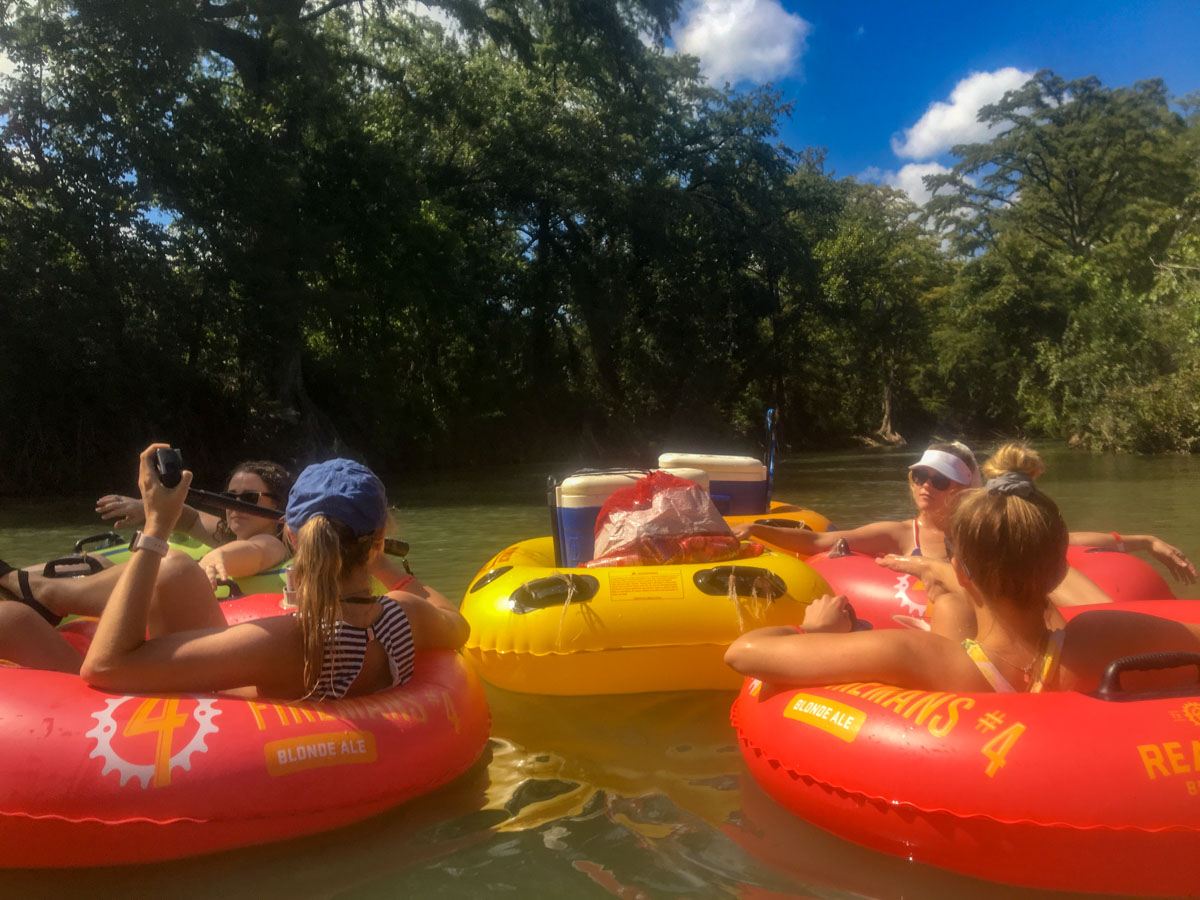 Before long almost all of use were separated from our original groups and new groups formed and reformed. Some people picked up steam while others got stuck on rocks. I found the best way to stay connected to someone was to hook my toes into the handle of their tube. Trying to hold on with a hand was cumbersome and impeded our drinking.

The biggest problem with getting separated from your group was that you were also separate from your drink cooler. Sometimes when a person wanted a drink refresh they might have to move hand over hand back to their cooler float. Other times a verbal drink order would make its way to the “bartender” and a drink would be shuttled back. 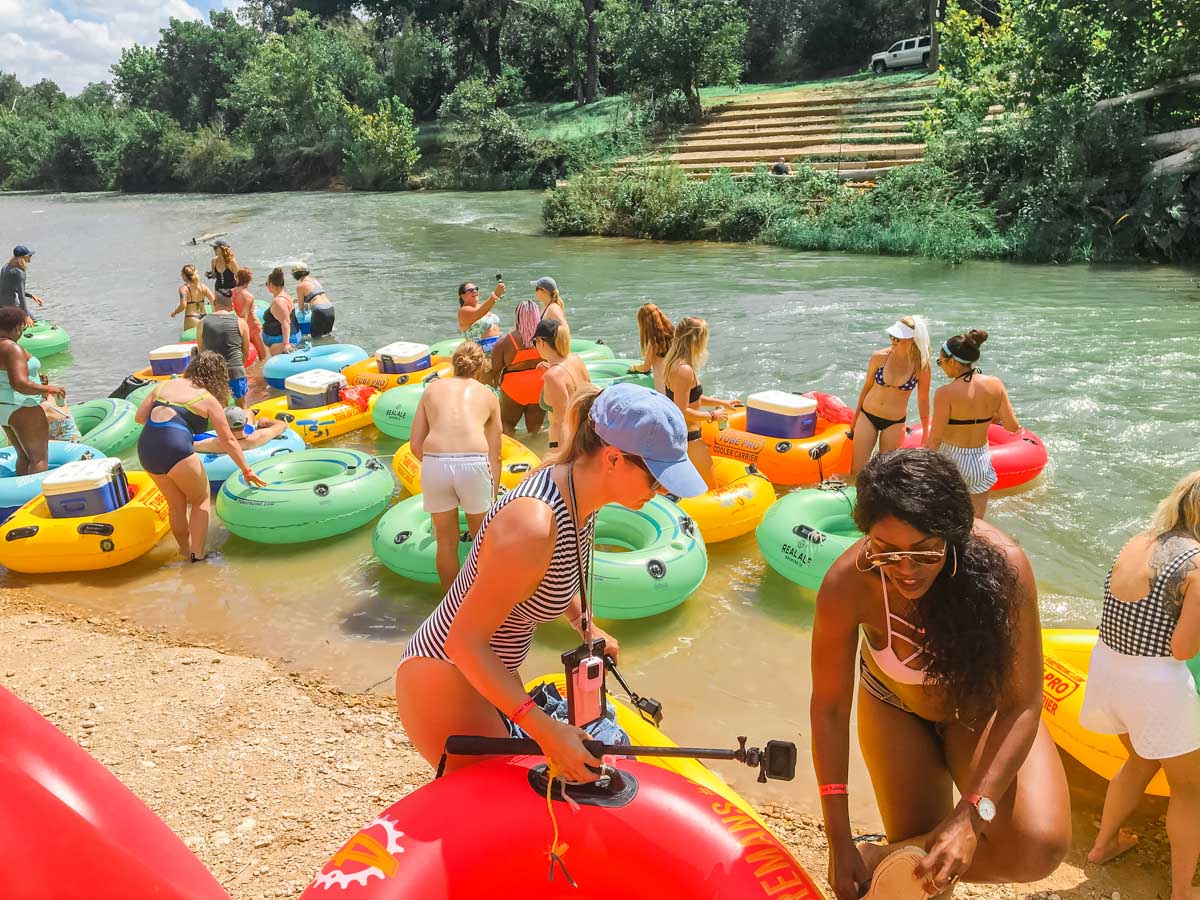 Professionals Can Play Drinking Games Too

Halfway through the float we pulled up for a snack break and to reapply sunscreen. If I learned anything in Nicaragua it was to reapply, reapply, reapply. While we were ashore, the drinking games broke out. I learned how to play Slaps. Beers were shotgunned. It was glorious. There is video that will remain only on my phone. Clearly, we were all keeping it very professional.

I absolutely loved the vibe of that afternoon. There was a lot of laughter and no drama. It was completely chill. We were like 50 reunited friends though most of us had only met that morning. Ok, the alcohol in the sun might’ve had a little to do with that.

The best thing about our river tubing afternoon on the San Marcos River was that going into the conference itself the next day I felt like I had 50 people I could say hi to or sit with, and for an often introverted person like myself, it was a reassuring feeling.

Truly, the best part of these conferences are the people you meet and the connections you make. 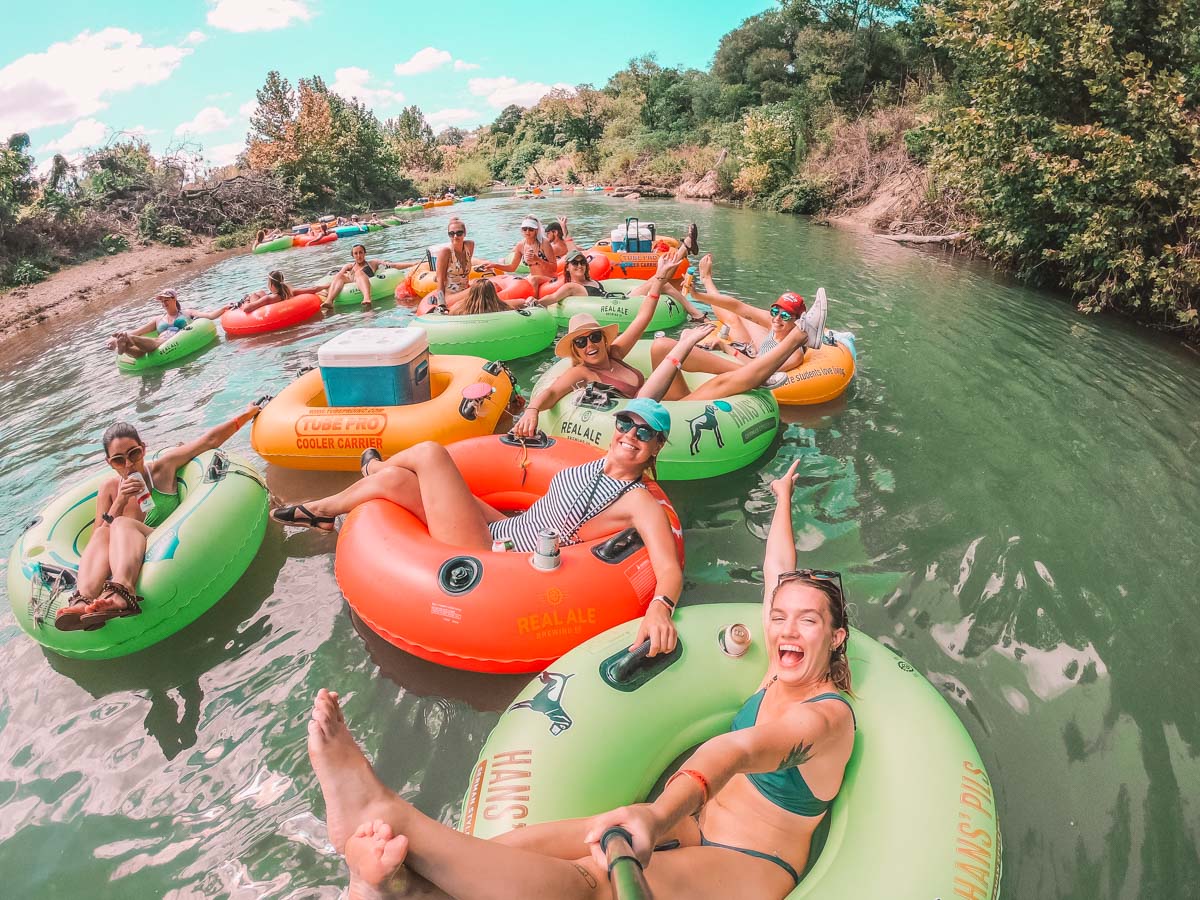 What to Pack for San Marcos Tubing