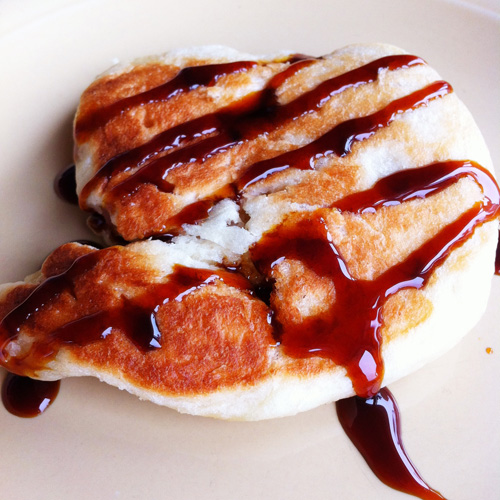 I was in Central Newfoundland recently and decided to indulge in a weekend brunch at Noah’s on the Point in Glovertown. I was really happy to discover that their buffet included toutons. Mmm… if you think eggs bene is the epitome of brunch, you’ve never tried a touton.

What is a touton?

Toutons: Pronounced tout(rhymes with pout)-ens – are a traditional Newfoundland breakfast food made of bread dough pan fried in butter or, more rarely these days, pork fat. You might call it a Newfoundland pancake. I like mine best drizzled with fancy molasses but some people prefer maple syrup. When cooked up right they have a crispy outside with a chewy inside. More often than not they’re served as part of a full cooked breakfast which might also include fried eggs, baked beans, home fries, fried bologna, sausage, bacon or other breakfast meat.

The history of the touton is a mystery. Even the Dictionary of Newfoundland English can nail down it’s origin. It’s as if they’ve just always been among us, though the first recorded mention of the word was in 1805.

How do you make toutons?

Toutons are a very low maintenance food. If you’re the kind of person to make homemade bread, simply put a little dough aside before the loaves go in the oven. However, if you’re like most of us, it’s simplest to head to the grocery store and pick up a ball of pre-made pizza dough. Get some butter or fat sizzling in a pan, pinch off a bit of dough from your ball (toutons are like humans, they come in all shapes and sizes), flatten it out as best you can, and fry it up about 2-3 minutes per side.

If you’re a traditionalist you’ll serve them at breakfast with molasses. But if you want to get fancy, try using a touton to replace the English muffin in eggs benedict. Or on a breakfast sandwich. Or even as a burger bun.

One sure way to ruin a touton is to try to get healthy with it. They should be made with plain, white bread dough, not whole wheat or, God-forbid, multigrain. Toutons are unapologetically basic that way.

Have you tried toutons before? If not, would you?