Things You Didn’t Know About Santorini 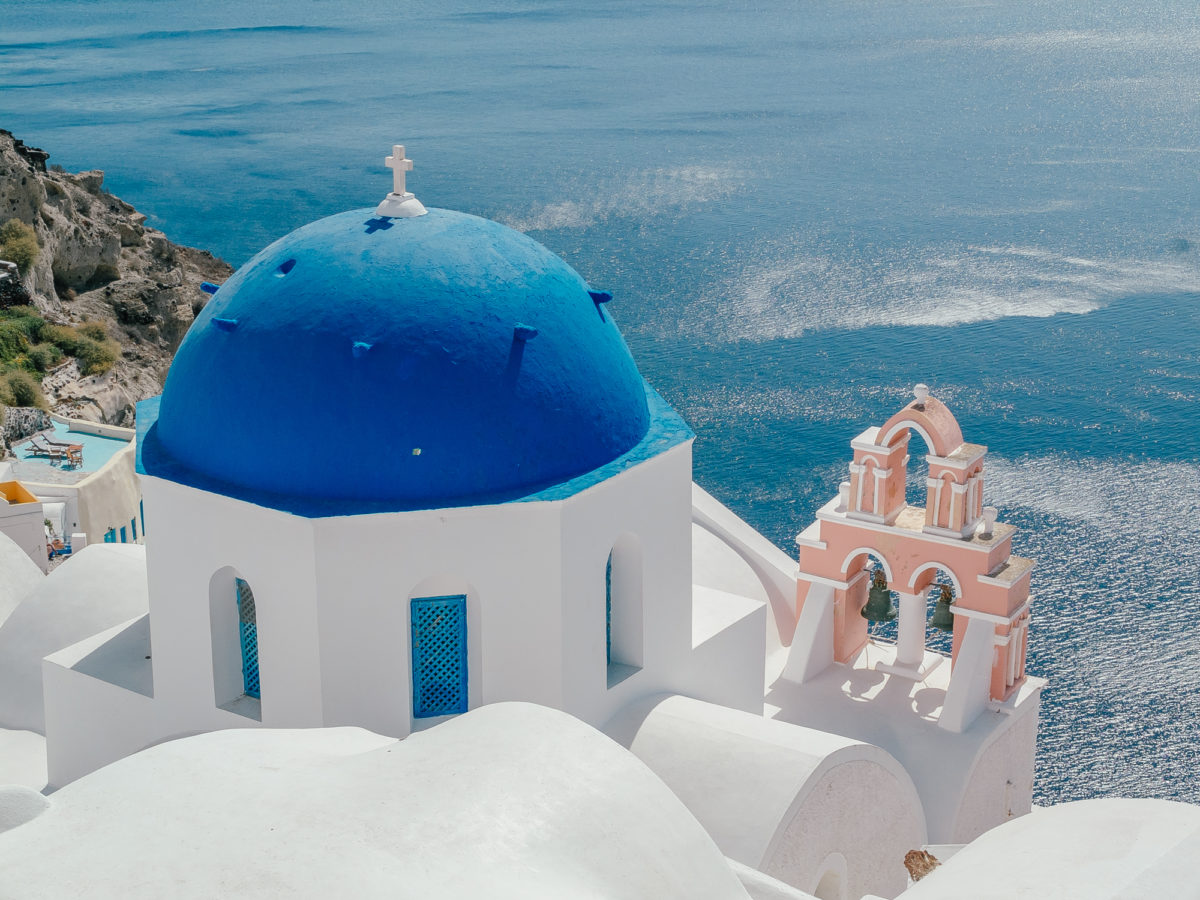 Ah, Santorini. Honeymooners paradise. Cruisers playground. Jewel in the crown of the Cyclades. Land of fiery sunsets, white-washed cubic buildings, and blue domed churches. It seems like a paradise, no? Well, I just got back from my first visit to Greece and there were a few things that surprised me that I want to share with you.

There Aren’t As Many Blue Domes as You’d Think

Do a Google Image search of “Santorini” and you’ll be inundated with pictures of blue domed churches. The island must be filled with them! But look closer… the pictures you’re looking at are all of the same three domes. While Santorini does have more than 250 churches, only a handful of them have blue domes. In fact, the largest church on the island, the Orthodox Cathedral in Fira, is entirely painted white and the Catholic Cathedral’s main feature is a yellow and blue clock tower.

You Shouldn’t Drink the Water

Greece is a European country and so it never occurred to me to check on the water situation. Santorini has only one natural spring and the amount of drinkable water it produces is not nearly enough to sustain the population, let alone tourists. Up until the 1990s Santorini had most of their water shipped in on tankers from Crete. Now most homes and hotels have access to water from desalination plants but it’s still rather salty and it’s advised not to drink it so most people buy bottled water. Expect to pay between €0.50 and €1 for a 500ml bottle in shops. 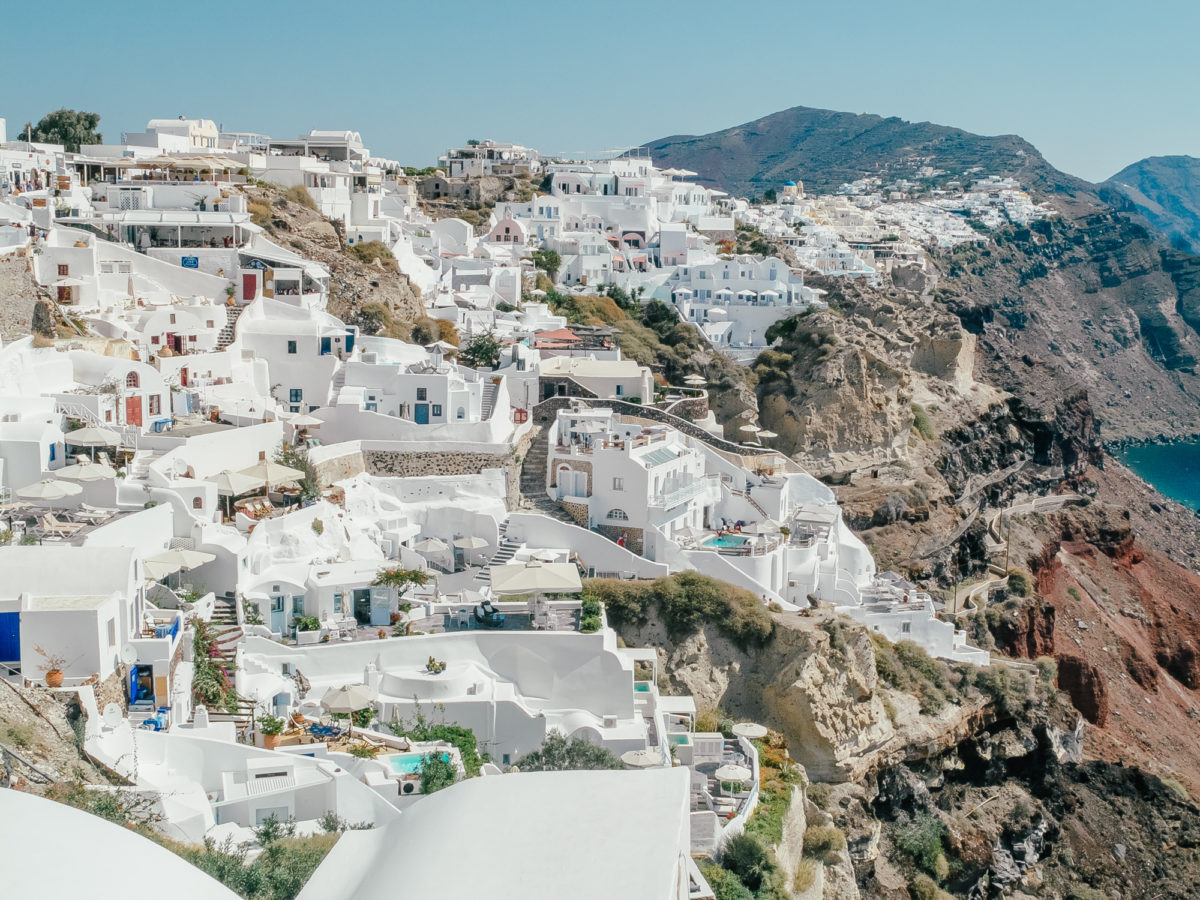 Those Private Pools Aren’t That Private

I’m sure you’ve seen photos on Instagram of amazing private infinity pools with caldera views. What you don’t see is the walkways just on the other side of that infinity pool or the crowds of tourists higher up the cliffside with a clear view down into your pool. While I would still absolutely love to spend some time in one of these posh retreats, I know that any outdoor space at a caldera-side hotel in Oia or Thira isn’t that private.

Greek plumbing is shit. Pun intended. The pipes are old and can’t handle anything other than #1 or #2 so you have to discard any toilet paper into a trash can. I gotta say, tossing tp in the toilet bowl is a hard habit to break and putting it in a bin is kind of off putting, but you get used to it after a few days. One plus of staying in hotels or hostels over AirBnBs is that they’ll take out the trash for you every day.

Head’s up: I’m not sure how common they are across the island, but the public toilet near the bus terminal in Fira is a squatter, but at least it’s stocked with toilet paper. 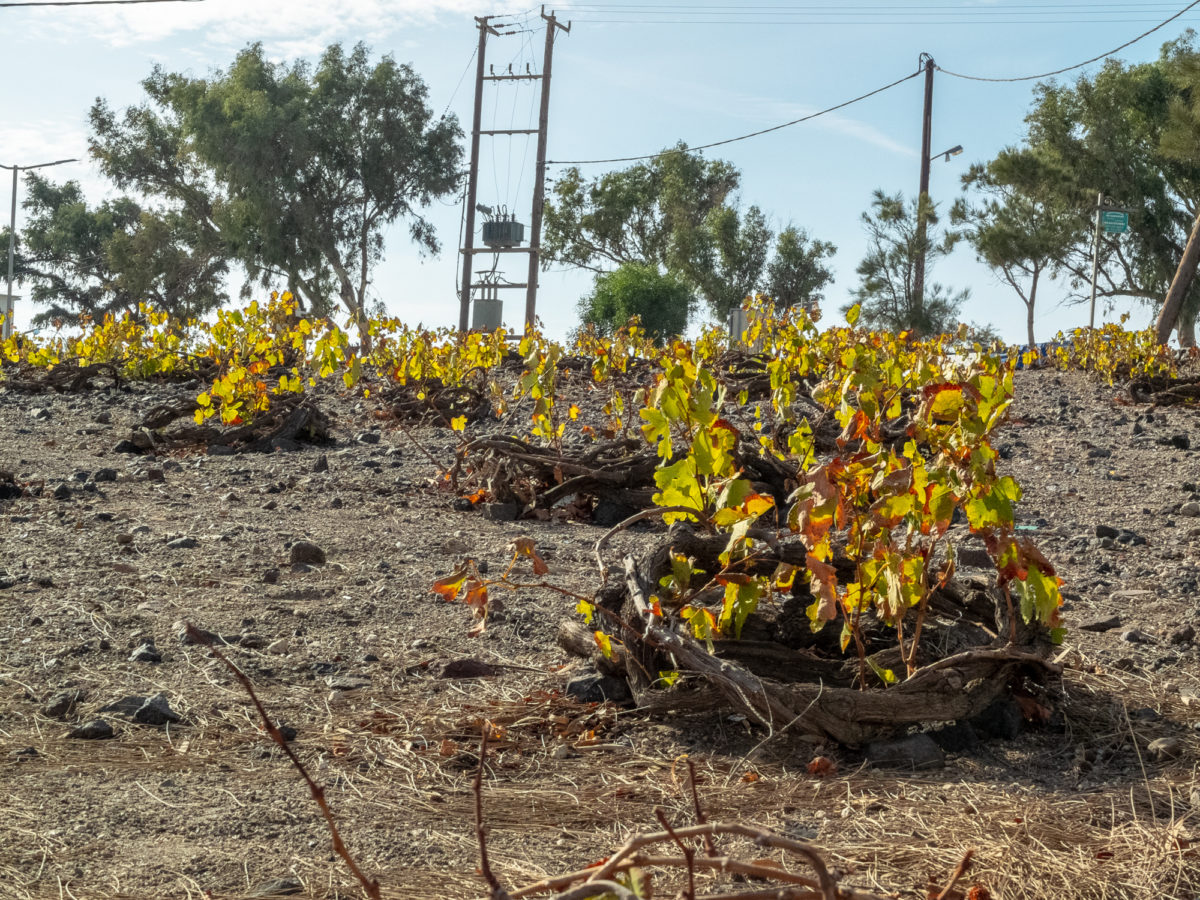 If you’ve ever been to a vineyard in North America or most other places in Europe there are certain things you’d expect to see. In Santorini, rather than neat rows of closely spaced vines, propped up on stakes and wires with a well shaped canopy, you’ll find coils of vines on the ground, planted far apart. They have been trained to grow in this way, with grapes growing inside the basket shape of the vines, in order to protect them from wind. Their main source of moisture? Morning dew. There’s no artificial irrigation here. 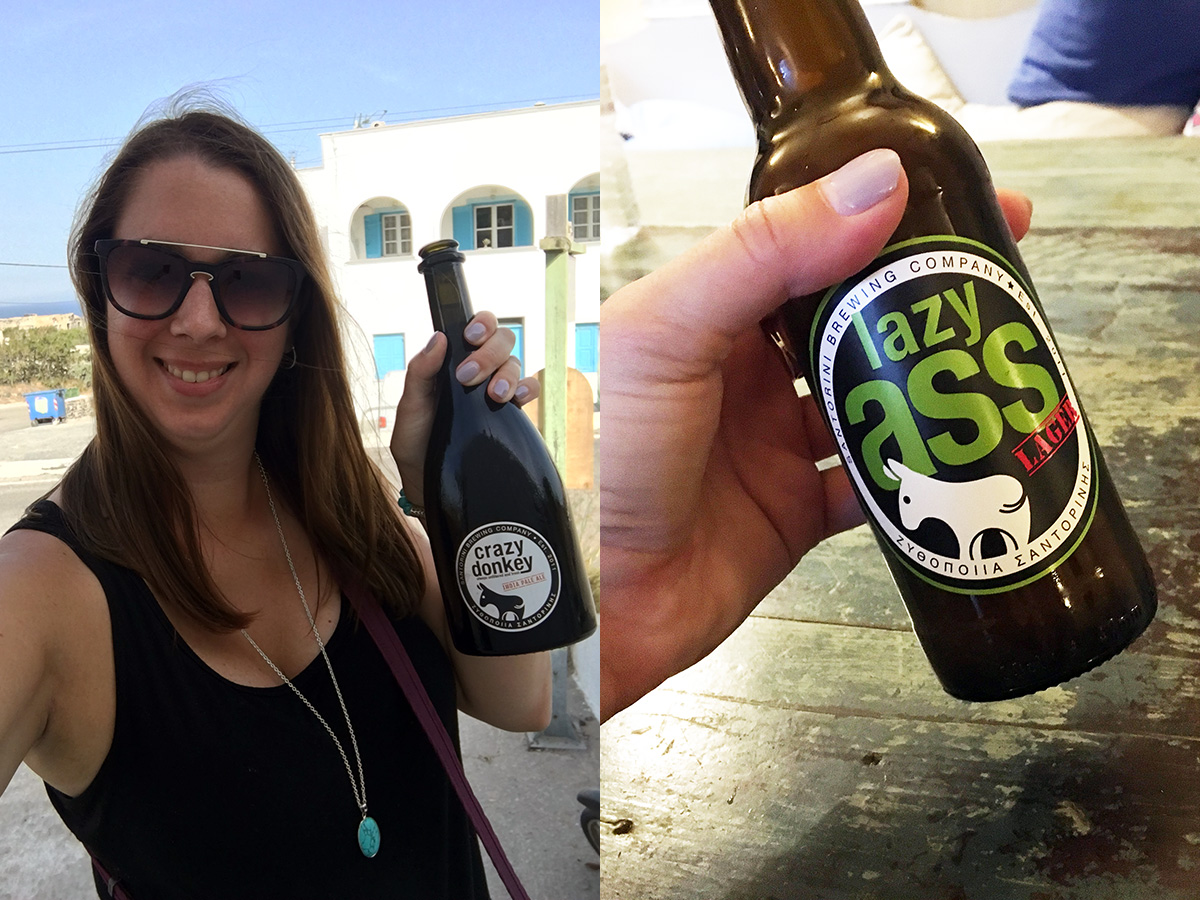 They Have a Microbrewery

When it comes to alcoholic beverages, Santorini is primarily a wine destination. Every empty plot of land seems to house coils of grape vines. But did you know that Santorini also has a microbrewery? If you visit you’ll see signs in restaurants and shops advertising Yellow Donkey and Red Donkey beer. These are just two of the styles brewed by the Santorini Brewing Company. If you want to try their full range you’ll need to visit the brewery itself. There you can sample Crazy Donkey – the first and only IPA to be brewed in Greece – as well as their other limited run beers. There’s a catch with the brewery though – they’re not licensed to serve beer in the building so you need to take your bottle to go, but since you can drink in public in Greece, you can just sit on their front steps to enjoy a brew or two.

While visiting Santorini you’ll probably see and hear different things referring to the same town. Technically, Thera is the ancient name of both the island of Santorini and the volcano that shaped it, while Thira (Θήρα) is the official name of the region, and Fira (Φηρά) is the capital of the island. But in reality you’ll see road signs pointing to Thira, “Fira!” being announced over bus loudspeakers, and people talking about Thera…and they’re all referring to the same place. Just keep the context in mind and you’ll figure it out.

On that note… Oía (Οία) is pronounced EE-ah, not Oy-yah. So if you’re hanging around the bus terminal in Fira hoping to get there in time for a glass of wine at sunset, you’ll be waiting a long time if you’re waiting to hear “oy-yah”.

Are you planning a trip to Santorini? Have you been before? What other little known facts did you discover? 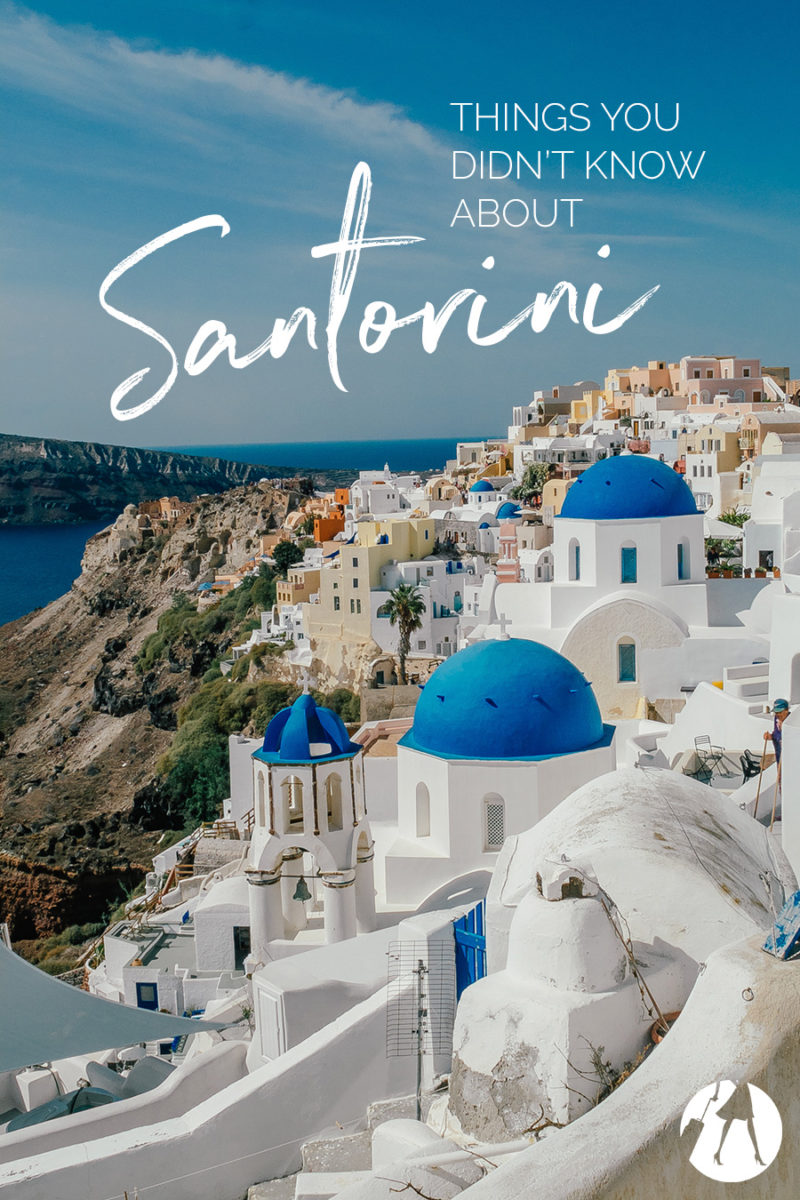