The Place to Not Be Seen: Korean Love Motels 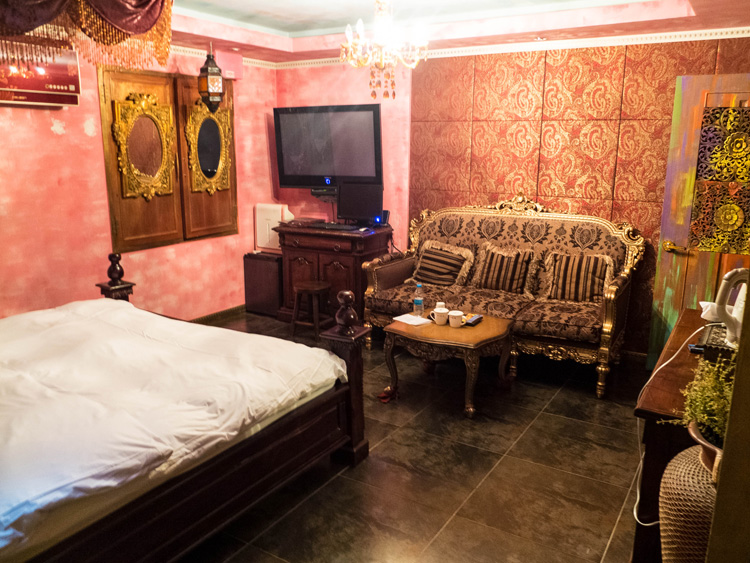 One of the themed rooms at the Chezlee Palace. This one was tame in comparison to some of the others.

A clamshell shaped bed. Egyptian columns and statues. Double seater tubs that are so deep you can float in them. Check-in clerks hidden by frosted glass. When I told people that I’d booked a room at a Korean love motel they would scrunch up their face as if they’d smelled something bad. “You’re staying where?”

The oft-maligned love motel. Koreans typically live with their parents until they’re married so if you and your significant other want a few hours of privacy what do you do? Love motel. Yes, they will rent out by the hour, but as a traveler you shouldn’t dismiss them outright because of that. Some places are trying to avoid the local stigma by branding themselves as theme, party or boutique hotels. You can call them that if it makes you feel better. Motels can be nicer and cheaper than the standard tourist hotel, as our experience with a four star hotel in Jeju proved. Not even the shampoo was included at that one. 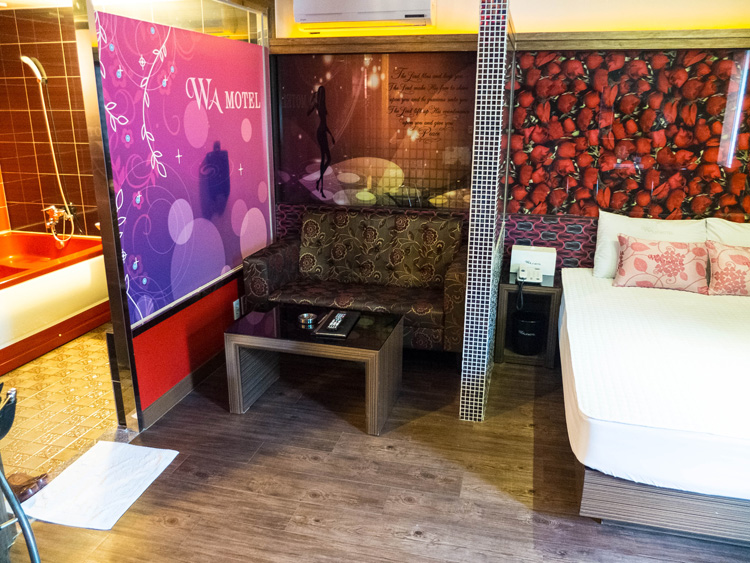 The sitting area of our room in Busan.

When I read about the Chezlee Palace Hotel on CNN Go, I knew I had to book it. It was so over the top and cheesy, not to mention affordable. I wasn’t given the clamshell room so don’t expect any photos of me as Venus but my Turkish themed room was no slouch. Lots of space and amenities I wouldn’t have had at a tourist hotel in the same price range. There’s no charge for mini bar items, which I didn’t learn until later. There was even a PC in the room, although it was running IE6. I didn’t feel dirty staying at a love motel, but I did for using that browser.

Love motels will usually be located down small side streets where you’ll find one after another after another. No need for reservations unless you have a particular one you want. If one motel is full, just try next door. Some, though not all, will let you see the room before you commit. Like anything, there are dives and there are gems. I was lucky to have gotten two gems.

Crazy exteriors, huge tubs and a menu of rooms to pick from.

Privacy is paramount at these establishments. All include some form of parking screen. Check in desks may have windows covered over so that you never see the clerk and they never see you. A menu of rooms is normally displayed for you to choose from. You may even stumble on a motel where the whole transaction is done via a kiosk so you never need to see or speak to another person. On your way out, just drop your key in the box in the elevator.

While privacy outside the room is huge, inside, not so much. The bathroom in the first motel we had only had a curtain, the second just a glass door. My travel partner and I took to wearing headphones when the other needed the facilities to give a little privacy. A bit awkward. The toilet at the Wa Motel was one of those fancy ones with buttons though so you could always play the flushing sound on extra loud. If you ever find yourself with a toilet with buttons, take the time and press them all. Trust me.

The names on the motels continually cracked me up. They’re really pretty meaningless. From Guest House Inn to W Motel, from Oh! to Hotel The Sun or comma’. The neon lights on each street might make you think you’re in Vegas. The street outside our motel in Busan had so much it created a faux-twilight where you had to look up at the sky to know it was dark. No need to worry about the room being too bright though. There was a huge wooden sliding screen to block out the light. It was night whenever you wanted.

While the small side streets, xxx amenity kits, parking screens and hidden clerks might be unusual, nothing felt sketchy or gave me reason for concern at the two places I stayed. Everything was clean and safe though the giant cans of bug spray kind of freaked me out. Like any place, quality varies but you may be able to check out the rooms before committing. I really think a love motel is something you need to experience on your next trip to Korea. Where else can you get breakfast delivered, a jacuzzi tub and, in-room PCs, with a side of massage gel for under $60 a night?