The Joy and Despair of a Pandemic Garden 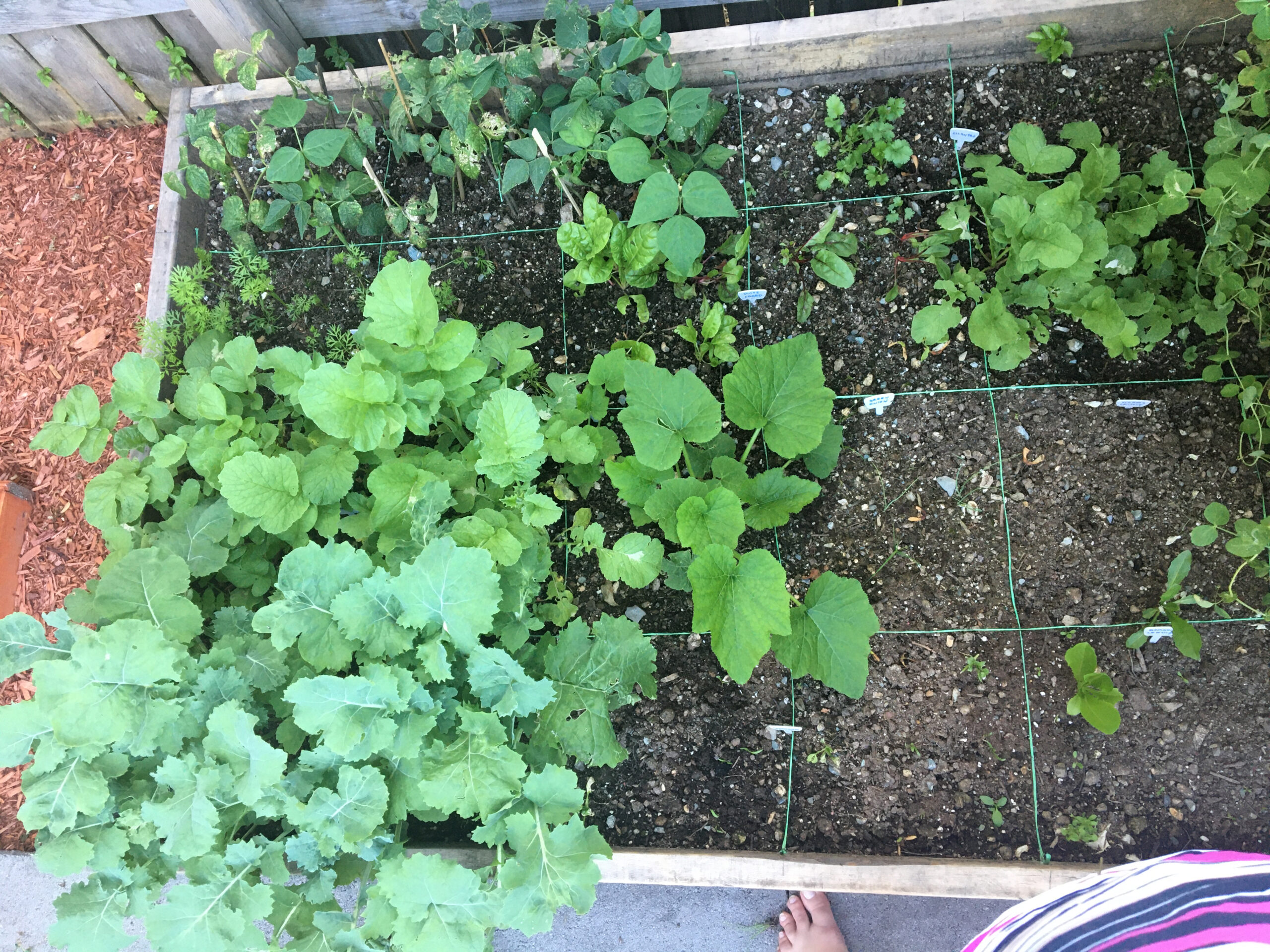 It was April and my newly acquired roommate and I were hearing about people starting gardens while they were stuck at home because of the pandemic. It seemed like it would be a pandemic trend that would even eclipse sourdough bread and at home workouts.

“Wouldn’t that be fun?” one of us would say. “Ah, but would we actually take care of it?” the other would counter. “Well, it’d be something to do anyway.”

Neither of us could argue with that.

And so, we started making plans for our little city garden. We weren’t alone. Just over half of Canadians now grow at least one type of fruit or vegetable, according to a new report from Dalhousie University’s Agri-Food Analytics Lab(AAL). And of those, nearly one in five (17.4%) started growing their own food for the first time during COVID-19.

Pandemic gardening, with its wholesome hominess and its promise of food independence, was the thing to do, in those weird early days. I was there for it. 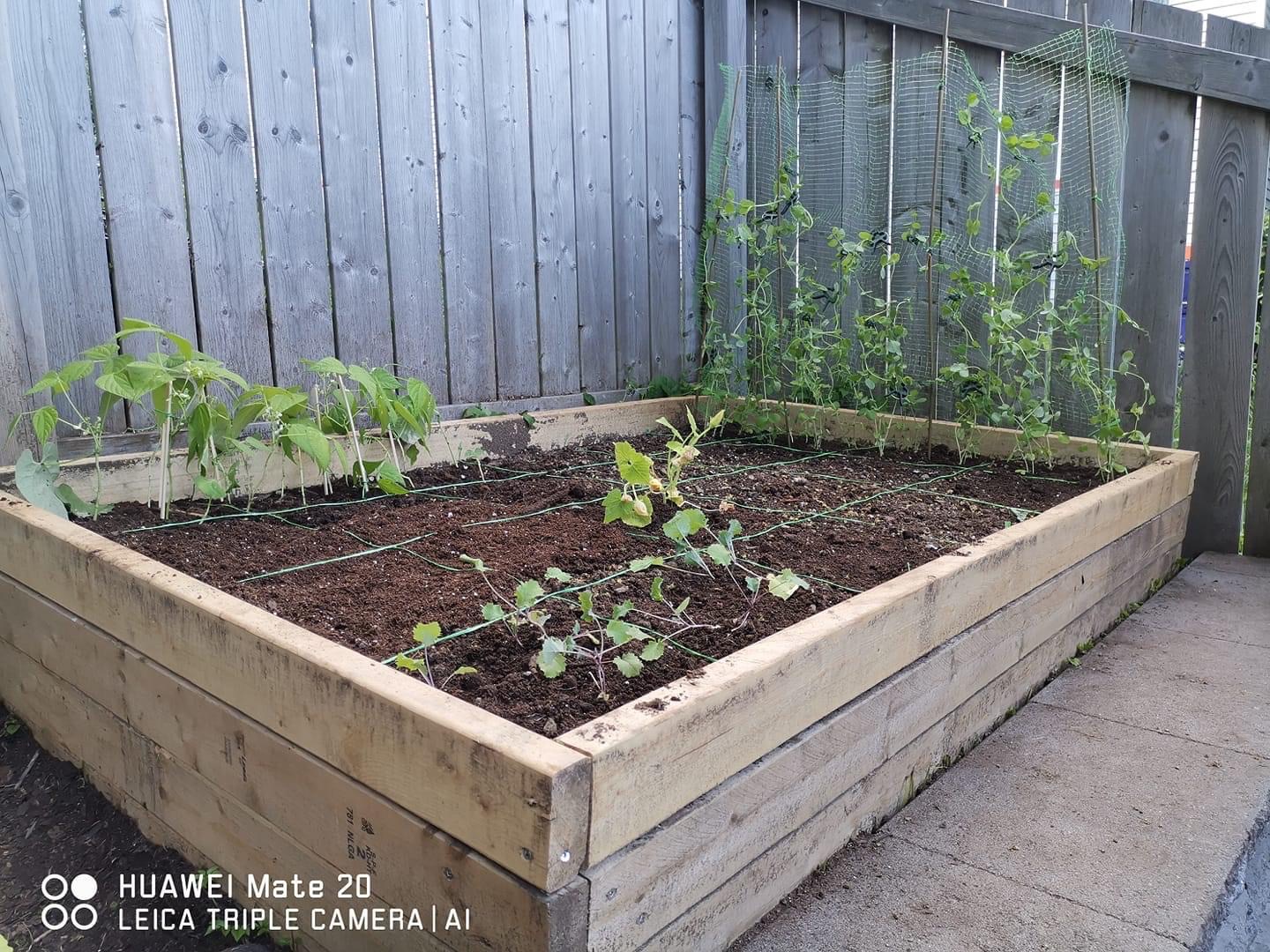 We had a small space to work with in my downtown backyard – about 6’x4’ that got a decent amount of sunlight. We’d do it on the cheap. P would build the garden bed and haul the dirt. I would tend the seedlings. We had no idea what would grow but knew we had 24 square feet to work with so we made grand plans for all kinds of things: kale, bush beans, snowpeas, spinach, lettuce, zucchini, carrots, radishes, Swiss chard, and a handful of herbs. We were ambitious…but also not.

If we got enough veggies to make a single salad we’d consider our garden a success.

Since we wanted to test the garden waters on the cheap we started off with just a seed tray, some potting mix, and a handful of seed packets. We’d sow, water, and cross our fingers. 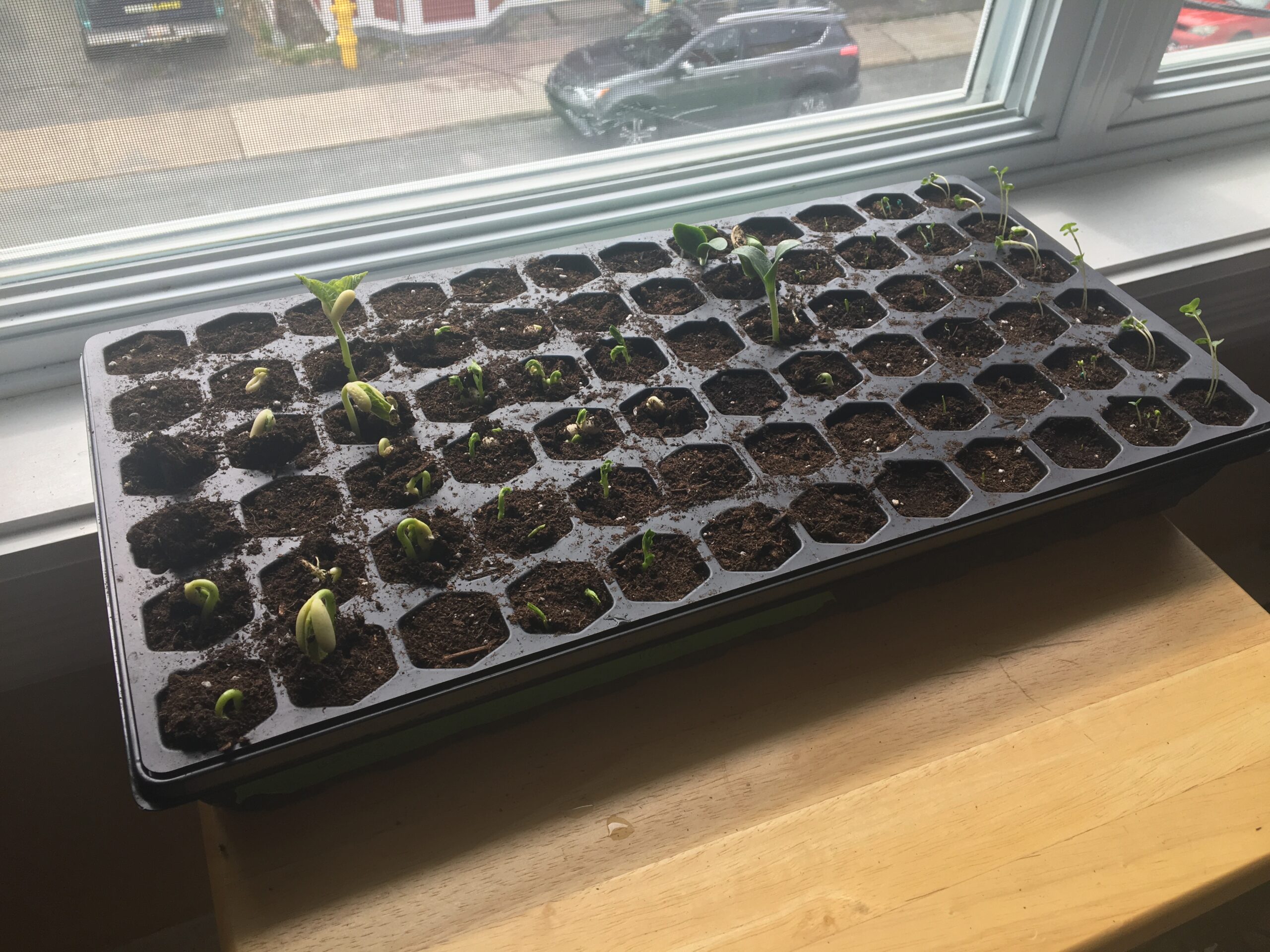 The joy I felt when the first thing sprouted – it was kale on a May morning – was simple and pure. I created something! I was immediately protective. I’d give the sprouts little pep talks every morning before settling into my work from home routine.

So it just about broke my heart when the first one wilted and fell over. I was utterly dejected as I plucked it from the dirt and threw it in the trash.

Where had I gone wrong? Was it because I didn’t buy a grow light? Did I water it too much? Too little? Was it too warm? It was disheartening and in my defeatist mind the whole project was doomed. Dramatic much? It was a spring filled with big emotions.

The whole summer felt like a continual roller coaster of hope and joy, anxiety and dejection. “Our seeds are growing! We’ll have so much food!” “Some seedlings wilted. Nothing is going to work.” “We have a female zucchini blossom!” “The zucchini stopped growing.” We poured our pandemic anxieties into researching mulch and fertilizers and frost dates. 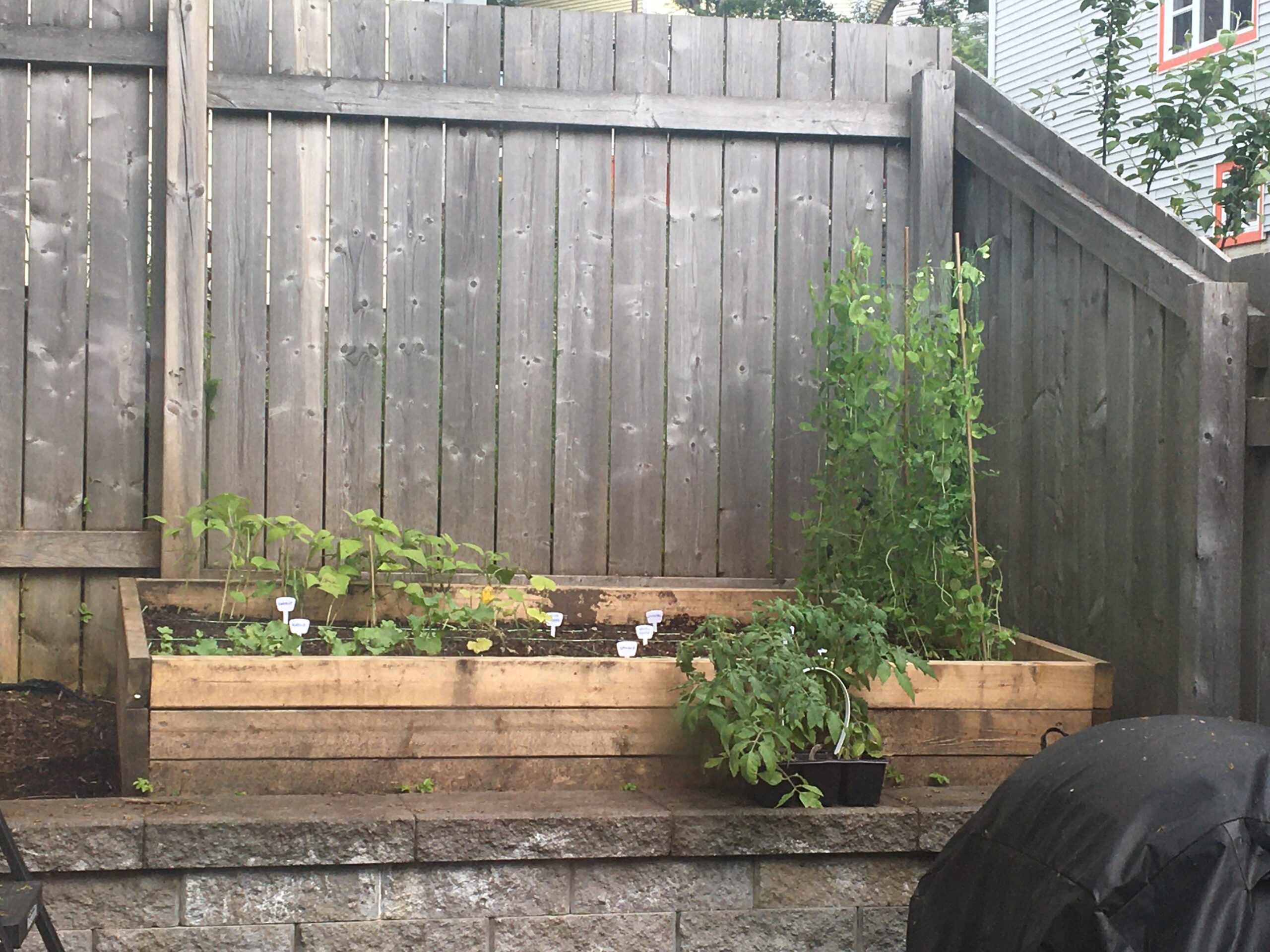 I now know about things like aphids, hand pollinating zucchini, and the scourge of slugs in a garden. But I’m still not sure what I should be putting on my garden: capelin, kelp tea (what the heck is kelp tea anyway?), liquid fertilizer, egg shells, or fairy dust.

Despite our lack of gardening knowhow, most of our seeds thrived. Especially the beans and snow peas. They were the superstars of the seedling tray. It was so fun watching them push up out of the potting mix, unfurl their little leaves, and start reaching for the sun.

Plants filled the south-facing window sills of all three floors of my house waiting for the time to move outdoors. I hope the passing neighbours got a little bit of delight from the sight of it.

Veggie gardening was addictive. Since neither of us wanted to toss out seedlings just because we didn’t have room in the garden bed, we found ways to make more room. We bought extra planters and buckets. No seedling left behind. 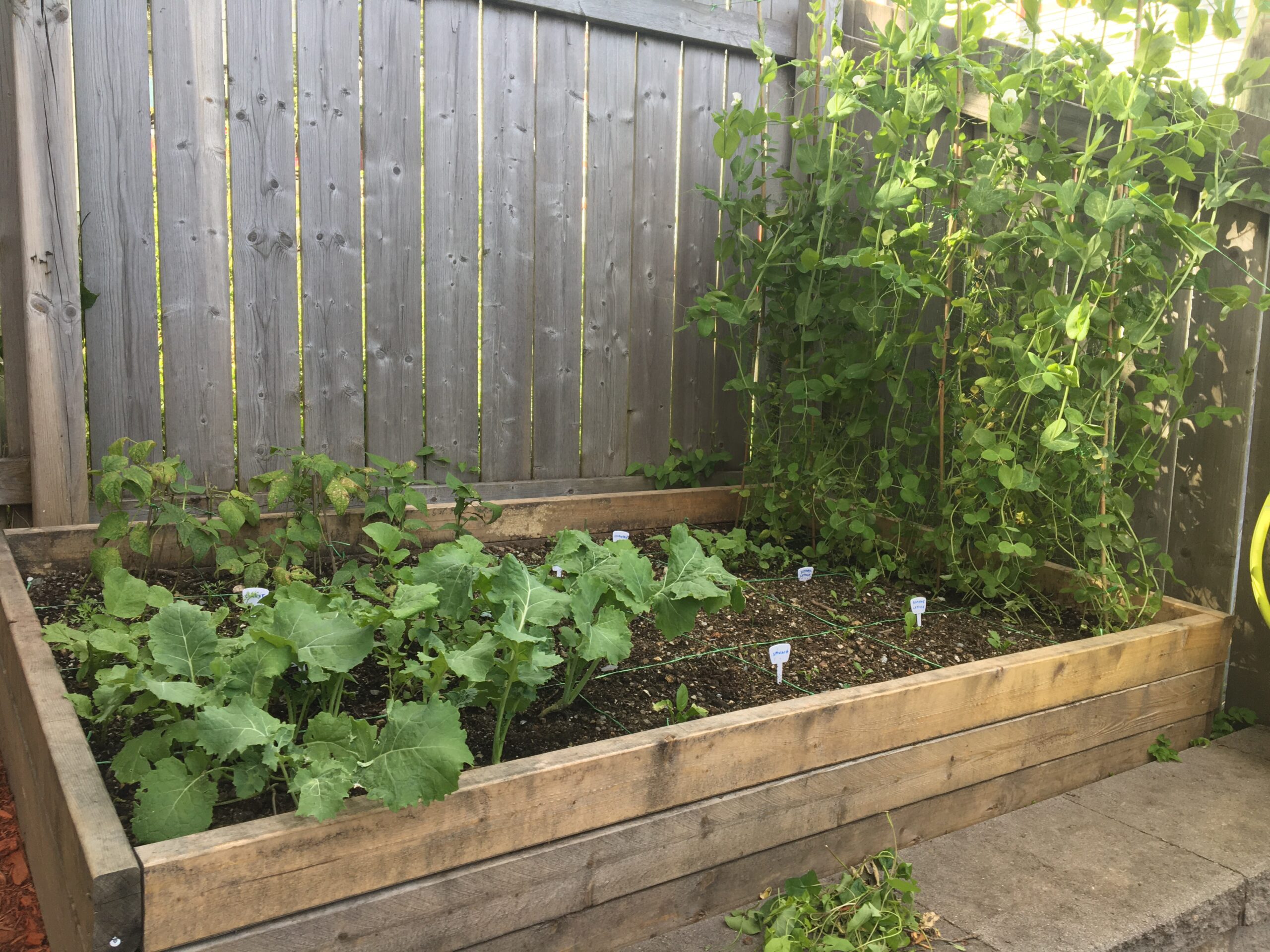 We bought more seeds and potting mix, fertilizer and a watering can, garden tools and a step stool. We bought crushed lime and soil, insecticide and mulch, a hose and a garden box to store it all in. When we saw wee tomato plants on sale for half price at a local nursery, we bought those too.

Some people may have done their self-care shopping at the liquor store or Sephora or Amazon, but I did mine at Home Depot, Kent, and Canadian Tire.

After we transplanted everything outside the backyard filled with greenery. And not the greenery of the bindweed and goutweed that filled my small, neglected space in years prior. It brought a smile to my face each morning when I opened the bedroom curtains to look out and see the kale getting taller or blossoms come out on the zucchini. 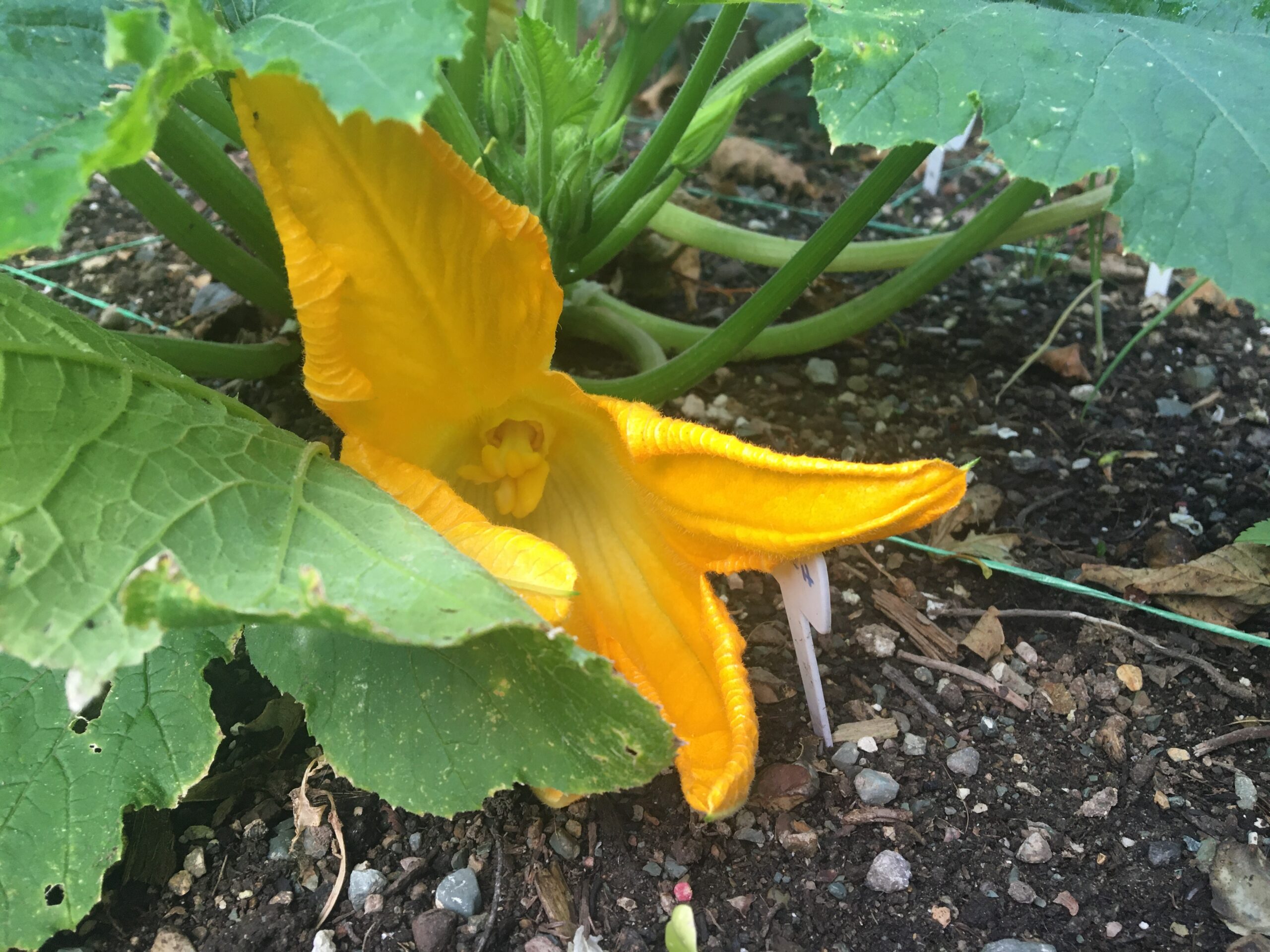 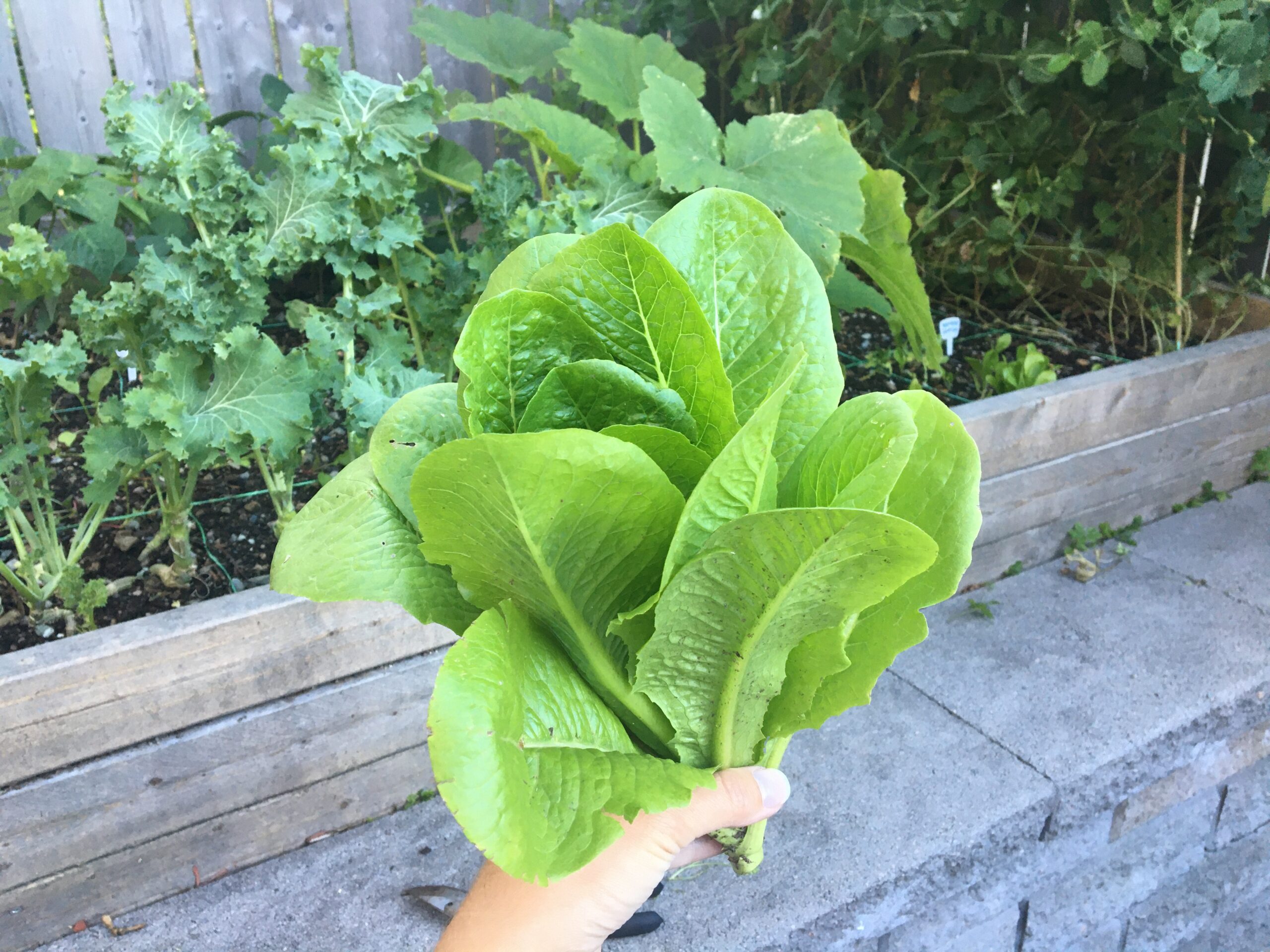 Tending to the garden was our daily zen. It was so serene to just hang out with the plants and see how they were doing. They gave us a reason to go outdoors. P did most of the watering, while I did the weeding. In previous years I’d let the bindweed run rampant, but this year I waged war. Every day I’d scour the garden for signs of the tenacious vine and pinch off any new sprouts with a triumphant, “ha!” I was defending my plant babies and I took great pleasure in it. 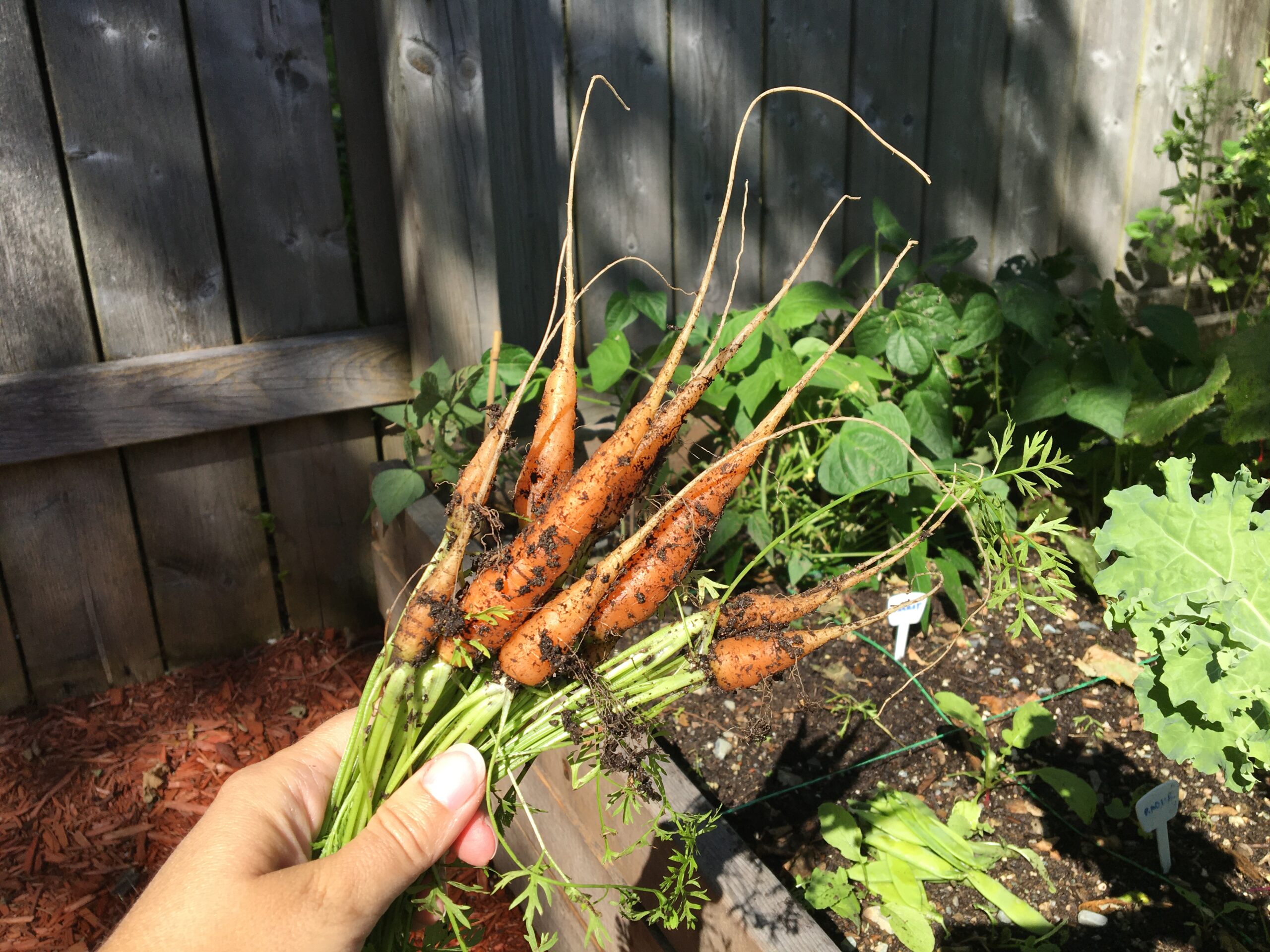 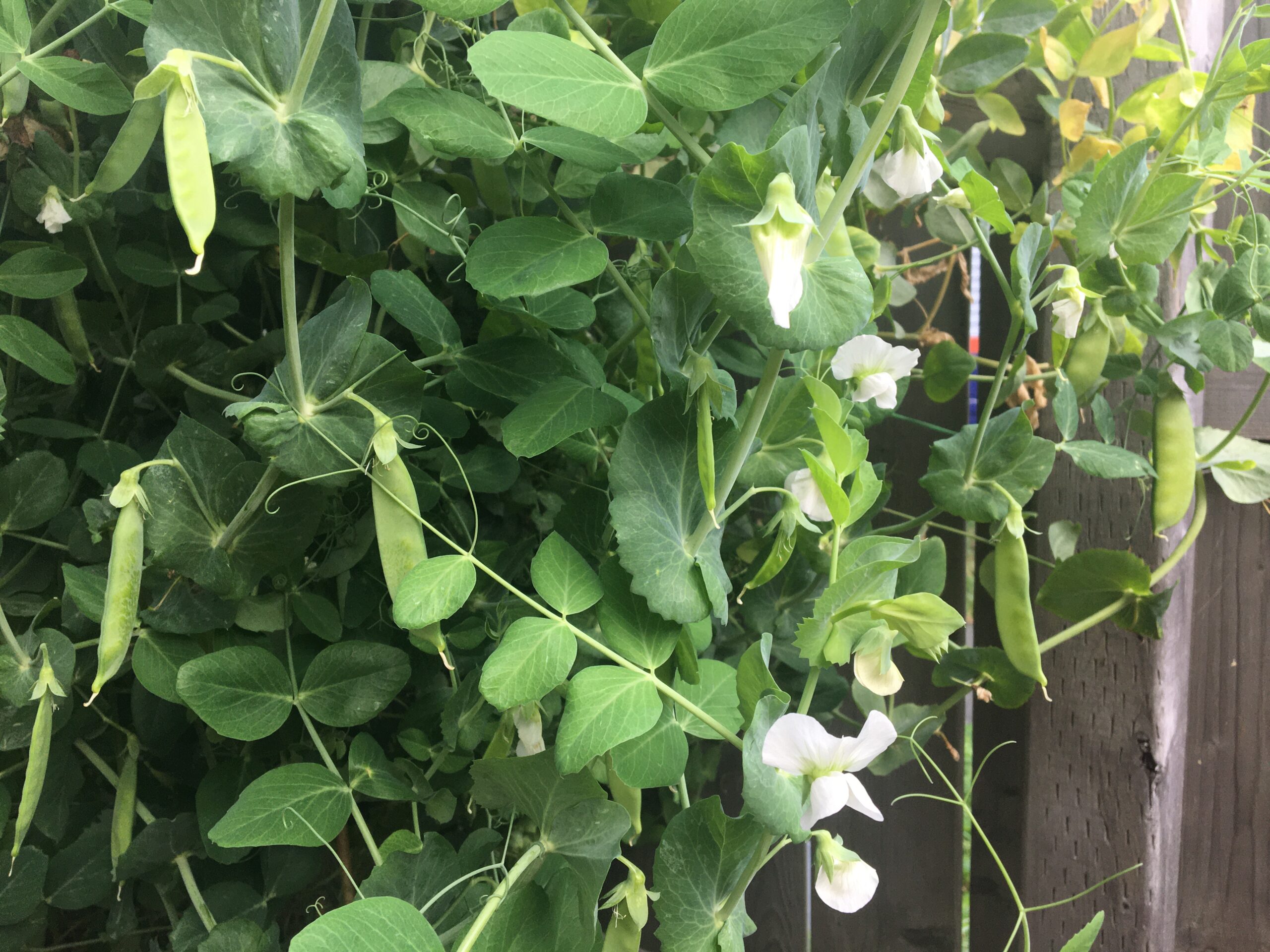 Our snow peas took off like wildfire. What started as a dozen little plants soon became a fast moving mass of greenery that practically jumped to the top of the 3’ bamboo and mesh trellis we’d built and then shot up past the 2’ extension we added to the top, and finally started to cascade down over the fence. The craziest thing was that with how big and strong the plants got up on top, they never thickened up at soil level. They look like plants that always skipped leg day. They may have had skinny bottoms and been a bit overcrowded but man, did they produce! 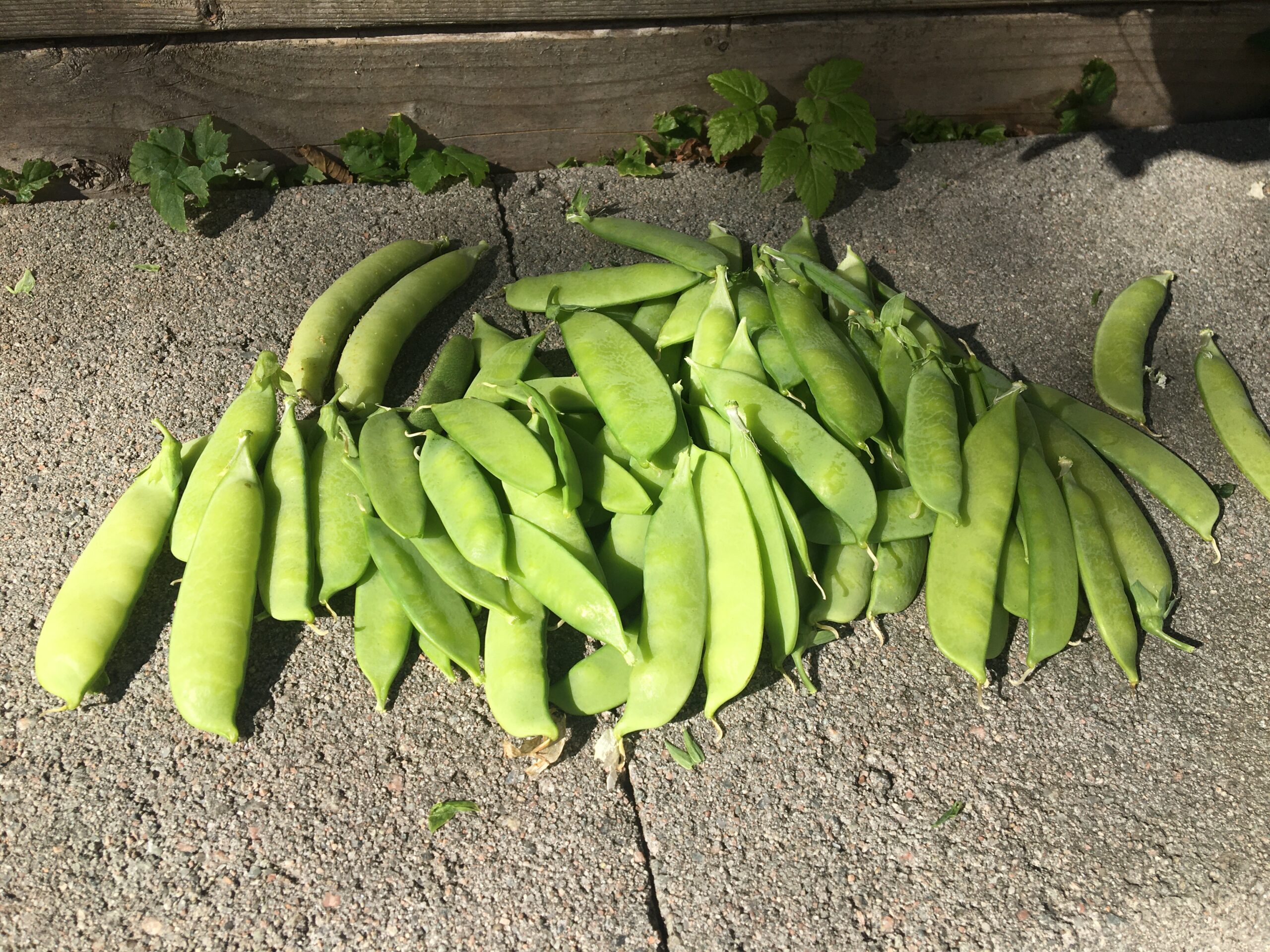 Our favourite thing was to pick snow peas off the vine and snack on them right then and there in the garden. They were the tastiest, freshest, juiciest snow peas either of us had ever eaten. Even now, in mid-October they’re still producing, though we can tell that their days are numbered.

Our tomatoes have also given us great satisfaction. With no greenhouse we didn’t know how we’d fare but we chose two varieties from the discounted selection that seemed to be built for cooler temps: Sub Arctic and Scotia. 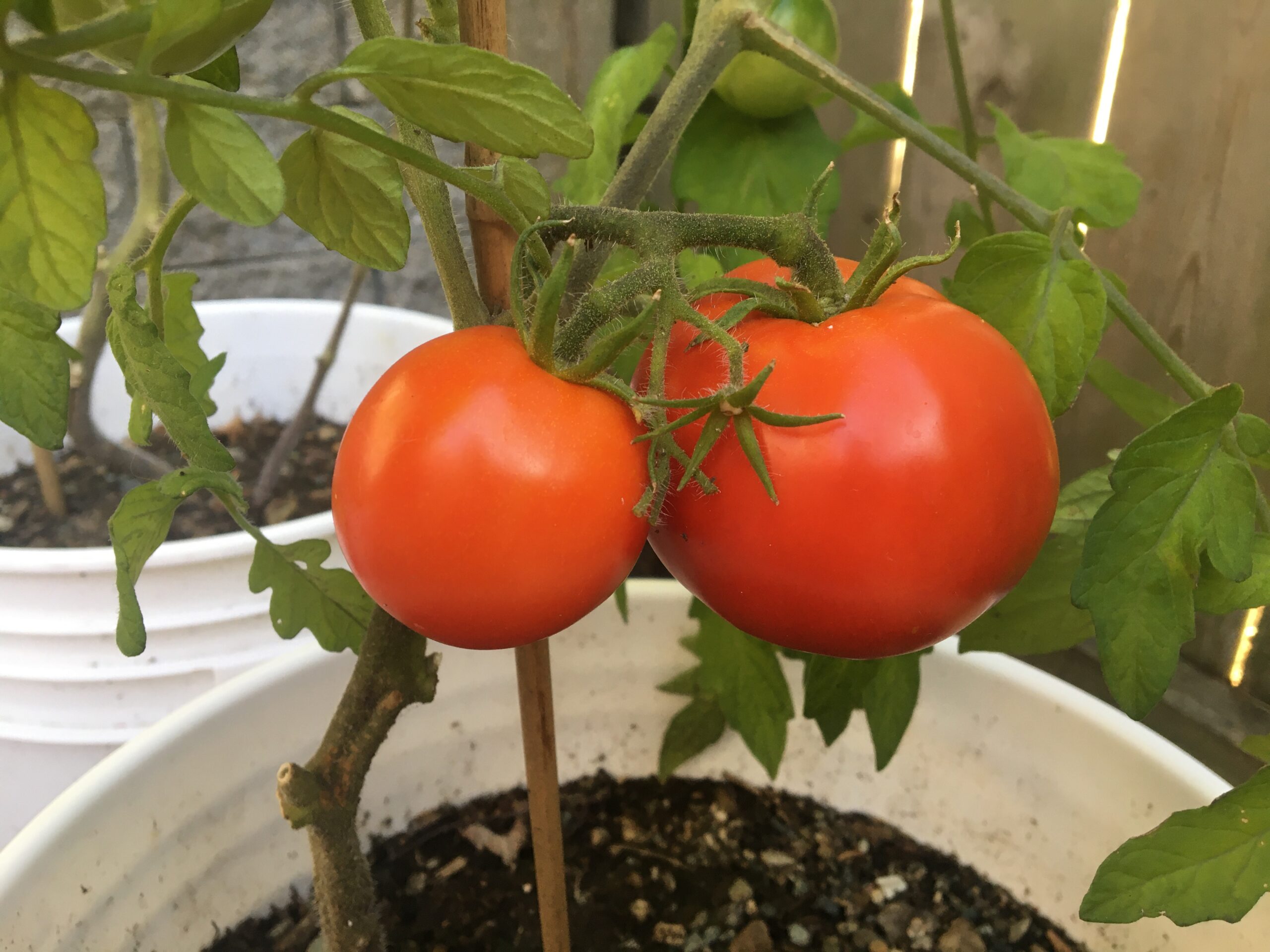 Our first tomato showed up in early July as a tiny little green bobble. We watched it grow and ripen for the next two months before we picked it to have with breakfast one morning in mid-September. It just might have been the best tasting tomato I’d ever eaten.

There’s really something very special about eating food you’ve grown yourself. It’s rewarding in a way that going to the store to buy veggies can never be. 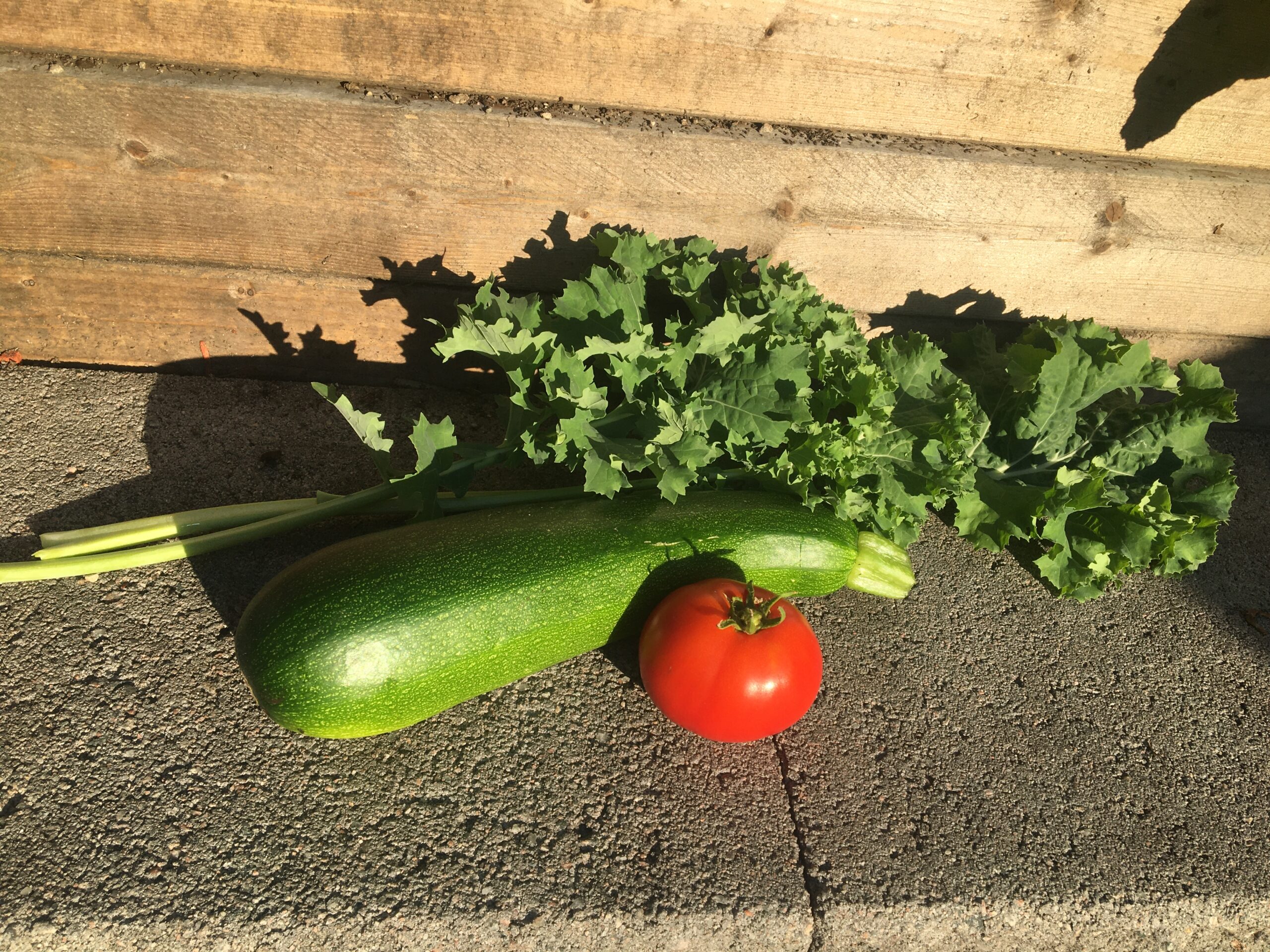 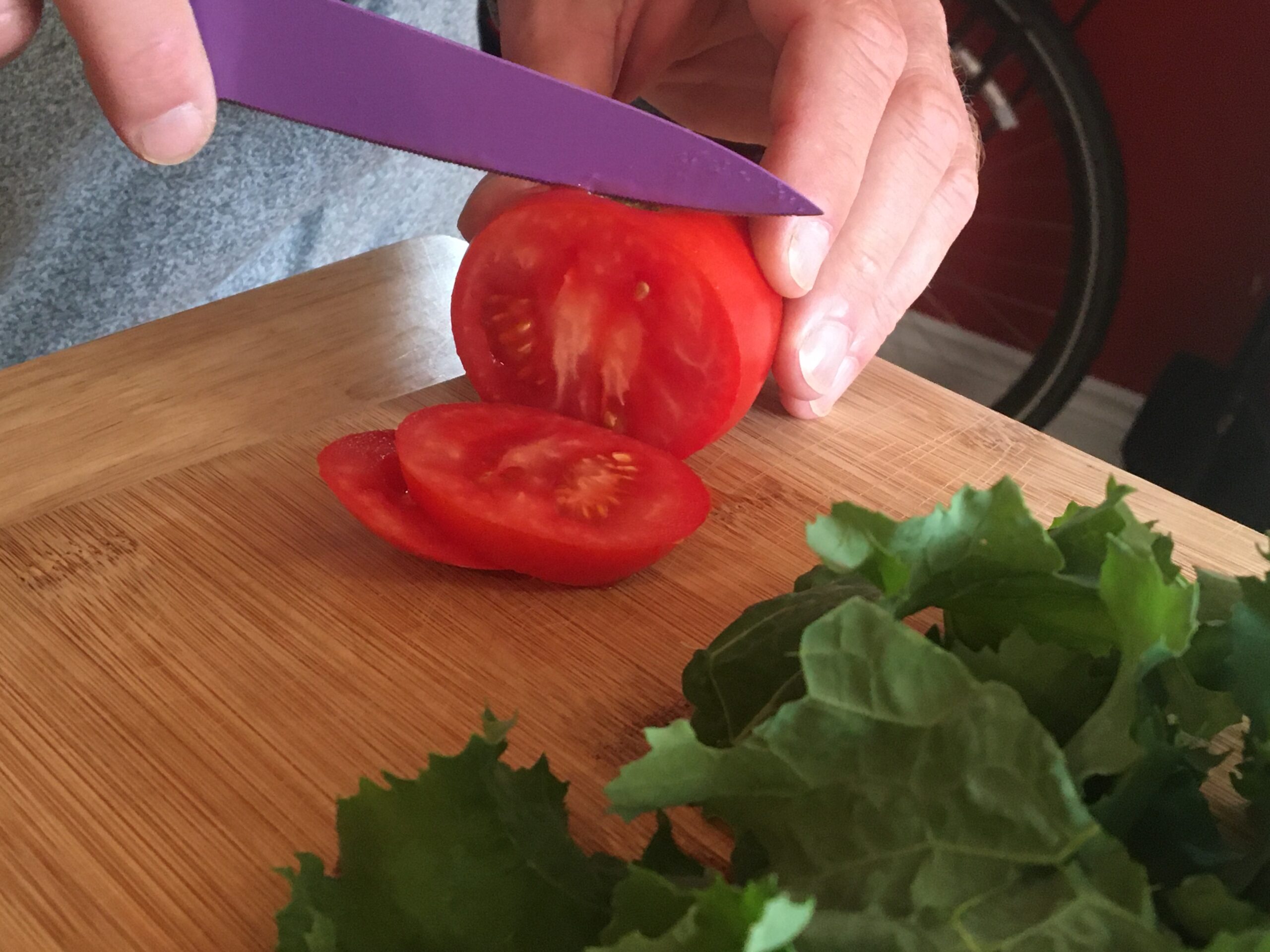 Safe to say, we grew more than a salad.

We’re already talking about next summer and what we’d do differently. We’d buy a proper trellis for the snow peas. We’d maybe plant a little less kale. We’d transplant things sooner and learn more about watering times and amounts, and how to increase our yield. We’d give up on the Swiss chard and cilantro. Maybe put the radishes in buckets. Find a way to get space to grow some potatoes and beets.

COVID-19 has taken away a lot of things, but it’s also given me something that I hope to hang on to long after the pandemic. My own little Victory Garden – with all the ups and downs and snow peas that go with it.