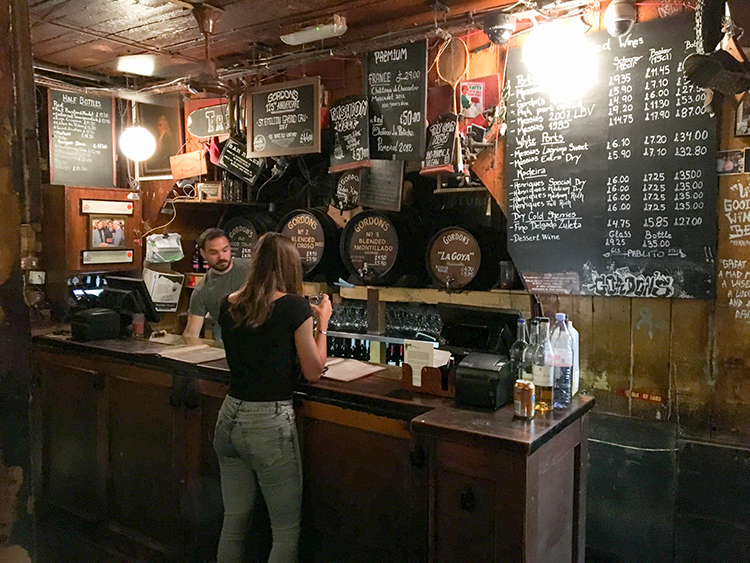 My friend and I were at the Globe Theatre in London, chatting about what our next plans would be for the day. The British lady in front of us turned around and said “I don’t mean to eavesdrop but if you’re looking for somewhere cool to go, you should check out Gordon’s Wine Bar. It’s one of my favourite places.”

I don’t know about you, but when a local recommends something to you and tells you that it’s one of their favourites, you listen. We thanked her and took down the details of the place with a promise to indeed check it out. “Not a lot of tourists know about it so it’s a bit of a secret. Don’t tell anyone,” she said with a wink. She didn’t know that she’d just told her secret to a travel blogger always looking for cool things to share. Oops. 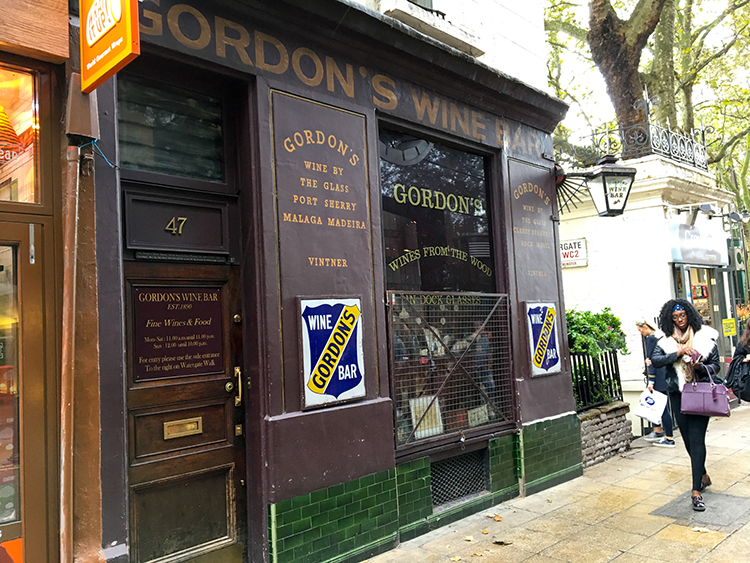 It was getting down to our last day in the UK before we finally found ourselves outside the Embankment tube stop looking for Gordon’s. Despite it being the oldest wine bar in London, it’s the type of place that you’d probably just walk by, if you weren’t looking for it. A non-descript frontage housing a very cool 19th-century cellar, complete with low vaulted ceilings, candlelight, and original Dickensian-style decor.

Fun fact, Rudyard Kipling once lived in the building above the bar. 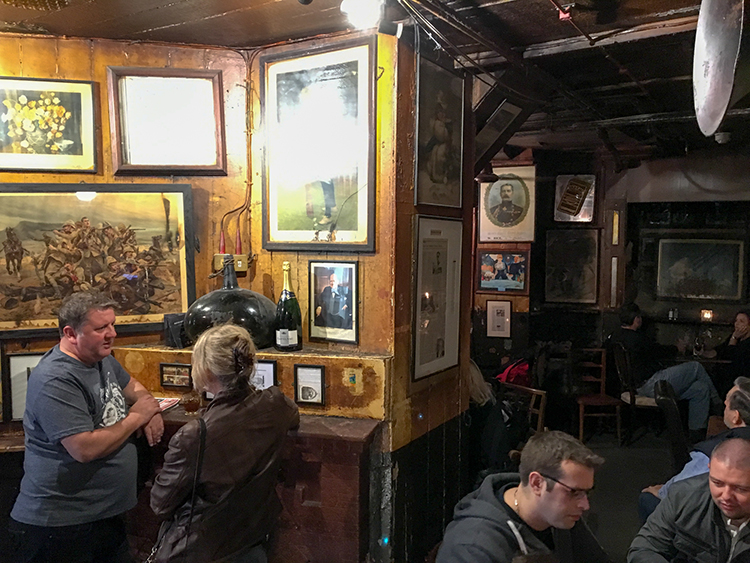 Gordon’s first opened in 1890 and it’s safe to say that the interior hasn’t changed a whole lot since. The current owners have made a commitment to keep the bar just as their regulars like it, which means no changes. We got the feeling that this really was a ‘regulars’ type of place, though popular with both younger and older crowds. We very well may have been the only tourists. I love when that happens.

We descended the stairs from the alleyway and the first thing we saw was the food service area. Gordon’s doesn’t just do wine, though it’s the only beverage you’ll find on the menu. They also have a large selection of cheese platters, cold plates, and a different hot meal each day. We thought the idea of cheese, cured meat, bread, and wine sounded pretty perfect for our lunch that day. 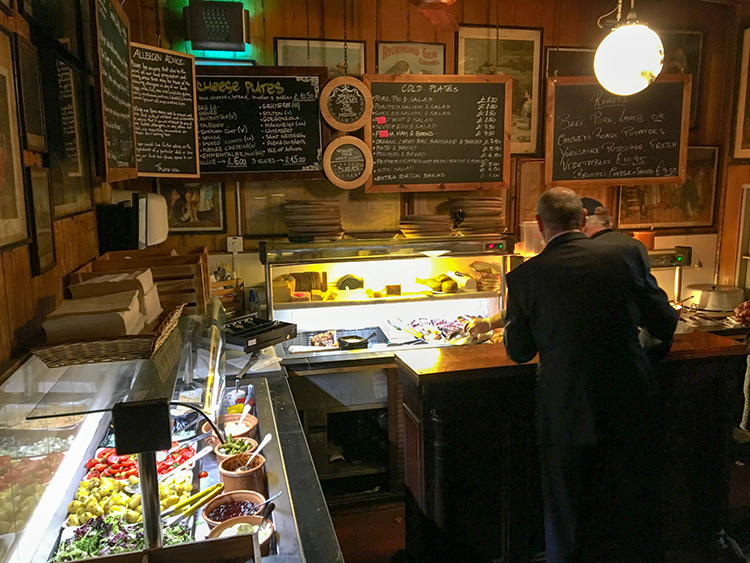 Note: there’s a £10 minimum to use your credit or debit card and you have to purchase your wine and food separately so if you’re not buying in a group, bring cash.

We scouted out a candlelit table in the back section under the very low vaulted stone ceilings. It’s the best place to sit really. We got one 2-cheese and bread platter for £10.50 and one Jamón Serrano and bread platter for £7.50 to split. While the menu says “two slices of cheese”, and they have over 20 cheese to choose from, the ‘slices’ were actually very large chunks. We estimated that our hunk of cheddar alone was probably at least 200g. The wine selection was even more extensive. While a lot of wines could only be had by the bottle, there were at least 50 available by the glass. I’m not sure I’ve seen a wine selection that large before. At most restaurants, you’re lucky to get half a dozen by the glass options. 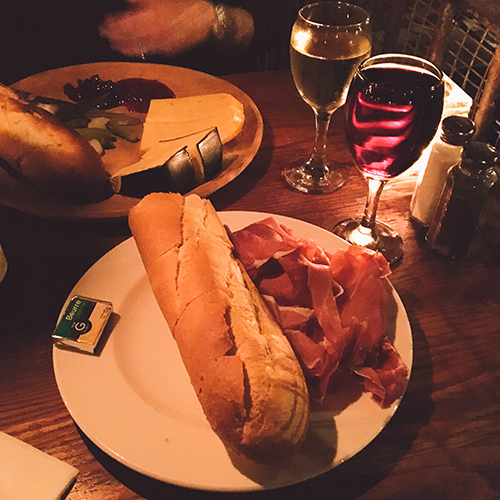 There was something very medieval about sitting there with wooden platters, tearing off chunks of bread with meat and cheese, sipping wine by candlelight. It’s probably the closest thing to a time travelling experience you can get. Very easy to forget about the modern hustle and bustle going on at street level just a few feet away. We commented on how it felt very Games of Thrones-y, alas, no Jon Snow showed up during our lunch. 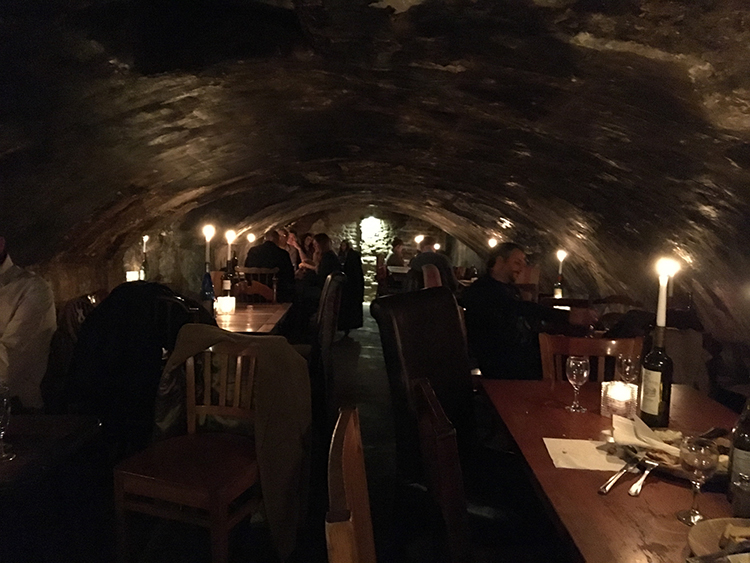 One of the things that I love about Europe is the sense of history that permeates just about everything. I mean, Canada itself was only 23 years old when Gordon’s first opened its doors. Our old stuff is new by European standards. I like to joke that Vancouver still hasn’t shaken it’s new city smell. Drinking in a bar that’s been operating for 126 continuous years…NBD in England. Love that.

We loved our visit to Gordon’s and never would have known about it if it weren’t for that kind lady at the Globe.

So I repeat, when a local tells you one of their secret places, take note.