Guide to the Best Dubrovnik Beaches

Looking for the best Dubrovnik beaches? Find your perfect sunbathing spot with my handy guide.

Just can’t wait to strip naked and jump into the clean, clear sea? Then Dubrovnik beaches are going to be right up your alley. First thing you need to know about Dubrovnik beaches is that Croatians use the word “beach” very liberally. It really means anywhere where you can climb into and out of the sea. And I do mean climb. Sometimes leap. Outcroppings of rocks with a metal pool ladder attached? Yep, beach. Gravel that will cut your feet? Beach. Croatia does have some proper sandy beaches but I didn’t get a chance to visit them. Instead I went swimming off the cliffs of the city walls and made two trips to Banje Beach while I was there. It was the water that got me.

Banje Beach is the public beach closest to the Old Town. There is some sand but it’s on the half run by the Eastwest Beach Club and you’ll need to rent a lounger (70kn) or a sunbed (100kn) to hang out there. You can also rent umbrellas (30kn) and towels (15kn) from them but I’m not sure if you can take them over to the public side or not. Unlike the restaurants in Dubrovnik, where you seat yourself, you need to pay for your lounger before you claim one or risk the attitude of the staff. There was a sign near the washrooms telling me that it was 2kn to pee but nobody tried to collect. Might be best to bring a few bucks with you when you visit this beach just in case. Or you can bring your own towel, hang out on the public side and just hold it. As for sand, you can always clear the bigger rocks away from your space to make it a bit sandier.

Whether you’re on the club or the public side the water is the same clear, aqua blue. The lack of sand means the water off the Croatian coast is some of the clearest around but it can be tough on the feet so consider water shoes if your feet are sensitive. One bonus of a pebble beach over fine sand? No sand particles sticking to every inch of me and getting into everything. It’s the little things.

Bokar Beach is a small pebbly beach next to the Pile Gate. It’s not much for swimming as the water is quite shallow but it’s a good spot for dipping your toes in or launching a sea kayak.

This beach is located in Pile, very near Dubrovnik’s Old Town. It’s used mostly by locals so don’t expect crowds. Šulić Beach was also used in the filming of Game of Thrones, specifically as the scene of a sea battle. 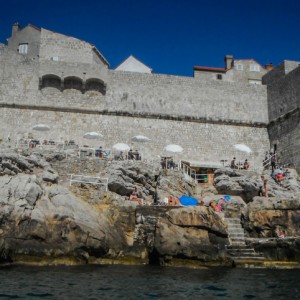 I gave cliff beaches a try when I went swimming off the city walls. It turns out I’m a bit of a crap swimmer when I have to jump straight into deep water. I much prefer to splash around in chest high water and occasionally swim out deeper. If you’re a strong swimmer and love doing cannonballs check out Buza, one of the cliff bars. There are great spots for leaping off rocks and ladders to help you get back out again. On these “beaches” you’ll see people perched on the cliffs, lounging around like sea lions sunning themselves. Swimming at Dubrovnik’s rocky/cliff beaches is definitely a unique experience.

Good Dubrovnik beaches aren’t just limited to those few near the Old Town. You also may want to check out:

One of the nicest beaches in Dubrovnik, the mostly pebble beach is sheltered by high cliffs which provides nice shade in the afternoon. You can access the beach by a steep staircase off Kotorska street.

A half-moon pebble and gravel beach near the northern point of the Lapad peninsula about 6km from the old town. There’s lot of fun to be had at Copacabana Beach. You’ll find parachute boat rides, water chutes, canoes, jet skis, pedalos, and banana rides.

If hip is more your style than family, you’ll want to check out the Coral Beach Club not far from Copacabana. Expect padded lounge chairs, pricey cocktails, and EDM on the speakers.

Lapped is the largest beach in Dubrovnik. It’s a gravel & sand beach that looks to be more of a place to park your lounger than a typical beach. It’s very family friendly with a play area, showers, and shallow waters.

The sand and shingle beach is located a 30 minute walk from Dubrovnik’s Old Town and is preferred to Banje Beach by locals and visitors-in-the-know. It’s at it’s best in the shoulder seasons when it’s not too crowded. It’s accessed by a long staircase that you’ll dread climbing but the views of the Old Town and Lokrum Island are worth it.

Croatians are into being at one with nature in a big way it seems. I counted five naturist/nude beaches in the general Dubrovnik area alone. The only one I saw with my own eyes was Lokrum Beach as I paddled by the rocky coast during my kayak adventure. An older naked man startled me by doing a swan dive into the water near me. I’m just glad he didn’t capsize me my first time kayaking!

Located 12km from Dubrovnik and 6km from Cavtat it’s a bit far but if you’re looking for a quiet, hidden gem this could be it. There is also a naturist section to the beach.

Located between Dubrovnik and Cavtat, it’s a small pebble beach for those who hide nothing from the sun.

Located in Mlini-Srebreno, about 7km of Dubrovnik, the beach is mostly rocky with some shingle.

What beach would you visit first in Dubrovnik? A cliff beach? A naturist beach? Or would you go out of your way to seek out the sandy beaches?