A Dinner Misfire in Barcelona

I’ve been thinking lately about how we often put our best foot forward and just show the highlights of our travels online. I know I’ve certainly been guilty of this time to time. Sure, I’ve told you about the time I needed stitches in New York and about how I worked myself into an unnecessary tizzy in Managua but there are lowlights I haven’t shared either, so I thought I’d start sharing some of my awkward travel moments.

If you want to travel but it intimidates you, maybe some of these stories will make you think, “well, hell if she can do it, so can I!” And if so, then my job here is done. For this story I’m going to take you back to Barcelona in 2014 when I was still a relatively new solo traveller. Fakin’ it ’til I makin’ it… 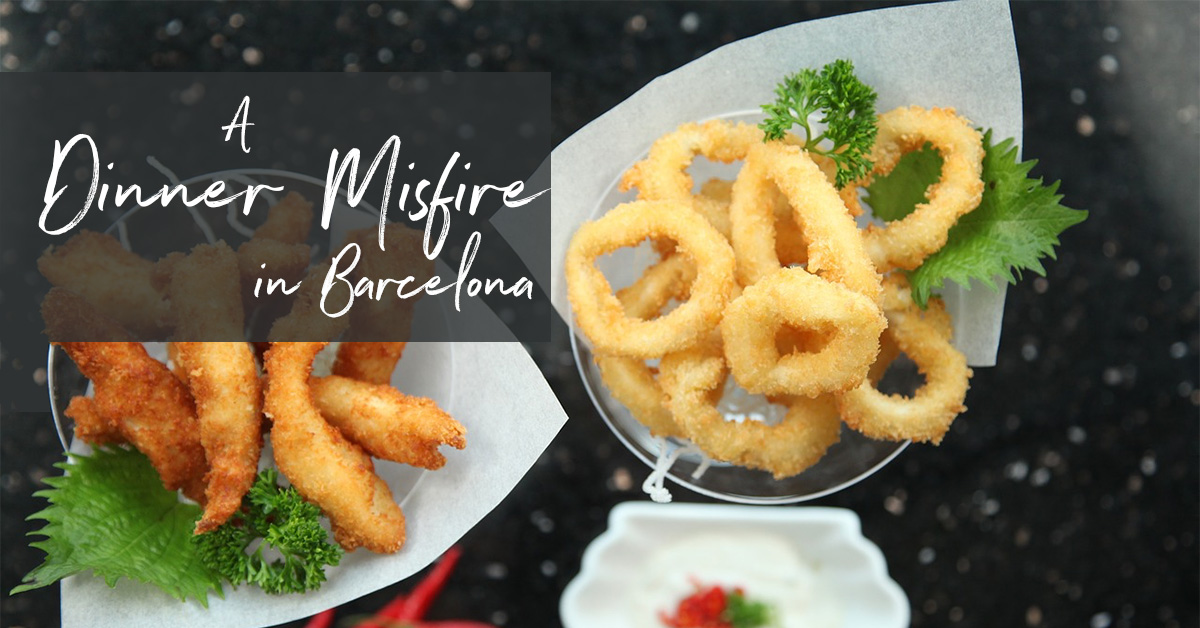 I approached the warmly lit door of Restaurante Los Toreros, tucked down a quiet alley in Barcelona’s Raval neighbourhood, and apprehensively stepped inside. The hostess greeted me and I replied with, “Una mesa para una, por favor.” I was in Spain and I was determined that I wasn’t going to be that tourist who didn’t even make an effort. I was going to do this whole dinner business in Spanish.

I was led to a small table and given a giant menu. I was loving the tapas. I’ve often thought that the perfect meal might be one made of just appetizers and that seemed to be the definition of tapas. Never mind the fact that tapas for one is the tiniest bit sad. I was into it. I ordered vino tinto, patas bravas, pan con tomate, morcilla, and then I thought I’d really step out of my comfort zone. I saw battered, deep-fried calamari on the menu. I would try that. “Y calamares a la plancha, por favor,” I said to the waiter as I confidently closed my menu and handed it over, feeling quite proud of myself.

The pan con tomate arrived and it was the perfect mix of tomato, garlic, salt, and oil with good crunch on the edges. The patas bravas were spicy and creamy perfection. The morcilla was salty and a great pairing with the red wine. Then the waiter brought my calamari. Except it wasn’t battered. It wasn’t deep-friend. It wasn’t rings. There before me sat not the golden brown rings I’d been expecting but four whole squid, their pale flesh glistening in the restaurant’s low lighting. 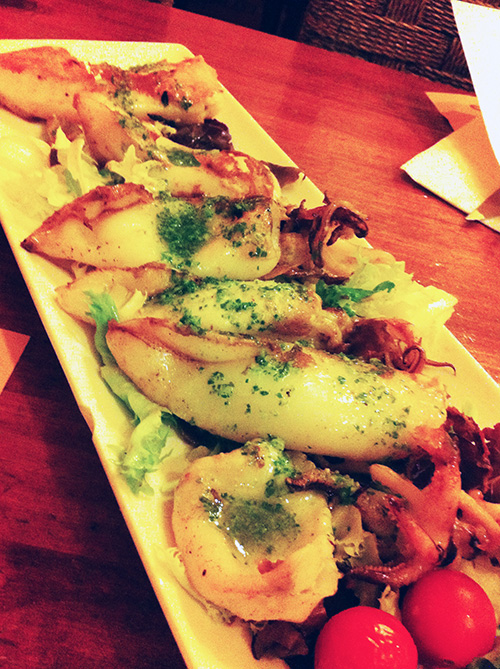 “What the…” and then it dawned on me. I’d screwed up. I’d meant to order the calamares a la andaluza. But I hadn’t. I’d been so proud of myself that I was doing it all in Spanish that I hadn’t’ been careful enough when the time came to order and I read out the first of two calamari dishes on the menu instead. “Well, shit.” The waiter had brought me exactly what I’d ordered: whole grilled squid. To add insult to injury, my accidental order was €1 more than my intended order.

Rather than admit defeat I decided to challenge myself and tuck into the squid. Not knowing the etiquette for eating whole squid, I attacked it with my fork and butter knife, trying to saw off a bite sized piece. The smell was…interesting. I popped it in my mouth and chewed. And chewed. It was a bit like seafood gum. Not my favourite. I tried valiantly but I only made it through maybe a third of what was served me. The taste and texture just weren’t for me. I felt a bit bad as the waiter came back to clear the dishes, leaving so much on the platter.

I paid my bill, bid the servers a “Gracias”, and slunk out the door. I’m still annoyed at myself that I wasted €8 on a dish I didn’t actually want but I’m glad I at least tried to conduct the whole process in the local language. So, despite my mini fail, the next time I went out for tapas, I tried again. This time I was much more careful about double checking the menu as I ordered. And I avoided calamari altogether, just to be safe.

So I tried something. It didn’t quite work out as planned, but if travel teaches you anything, it’s how to roll with the punches.

But I still wonder sometimes what the calamares a la andaluza was like.