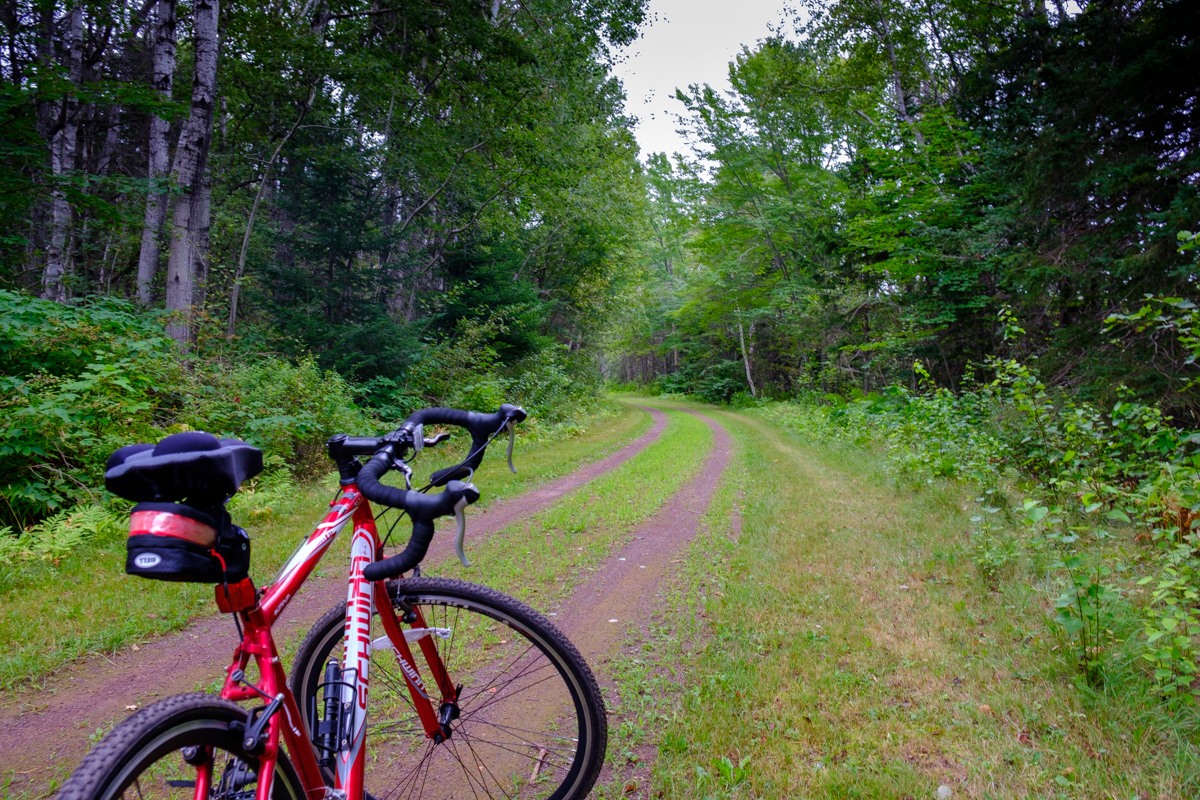 It had been more than two years since I’d last been on my bike so I was a bit apprehensive, but you know how the saying goes.

In the spring, I’d had my bike tuned up and bought myself a pretty purple helmet with the thought that, with being more housebound during the pandemic, I’d start cycling for recreation and exercise. Except I forgot that I live in a city of steep hills and I’m a wimp. So that didn’t happen.

Five months later I was planning an Atlantic Bubble vacation to Prince Edward Island and my travel planning turned up the Confederation Trail. Before I knew it, I’d added my bike and all its accessories to my road trip packing list. Except my bike shorts somehow got left behind. Rookie mistake.

The Confederation Trail is a mixed-use trail that stretches from one end of PEI to the other with a few spurs and offshoots. 266km will take you from Tignishn in the northwest to Elmira in the northeast, with another 200km of offshoots to Borden, Charlottetown, Montague, Georgetown, and Souris. It follows the old, abandoned railbed which means it never inclines or declines more than 2% off level. Perfect for this hill-hating rider.

When the province abandoned trains in 1989, islanders found themselves with a unique opportunity in the land and turned the hundreds of kilometers of railway tracks into a walking/biking path in the summer and a snowmobile trail in the winter. Making delicious lemonade from the lemon of losing their railway.

I decided I would make my, hopefully, glorious return to cycling on this trail. 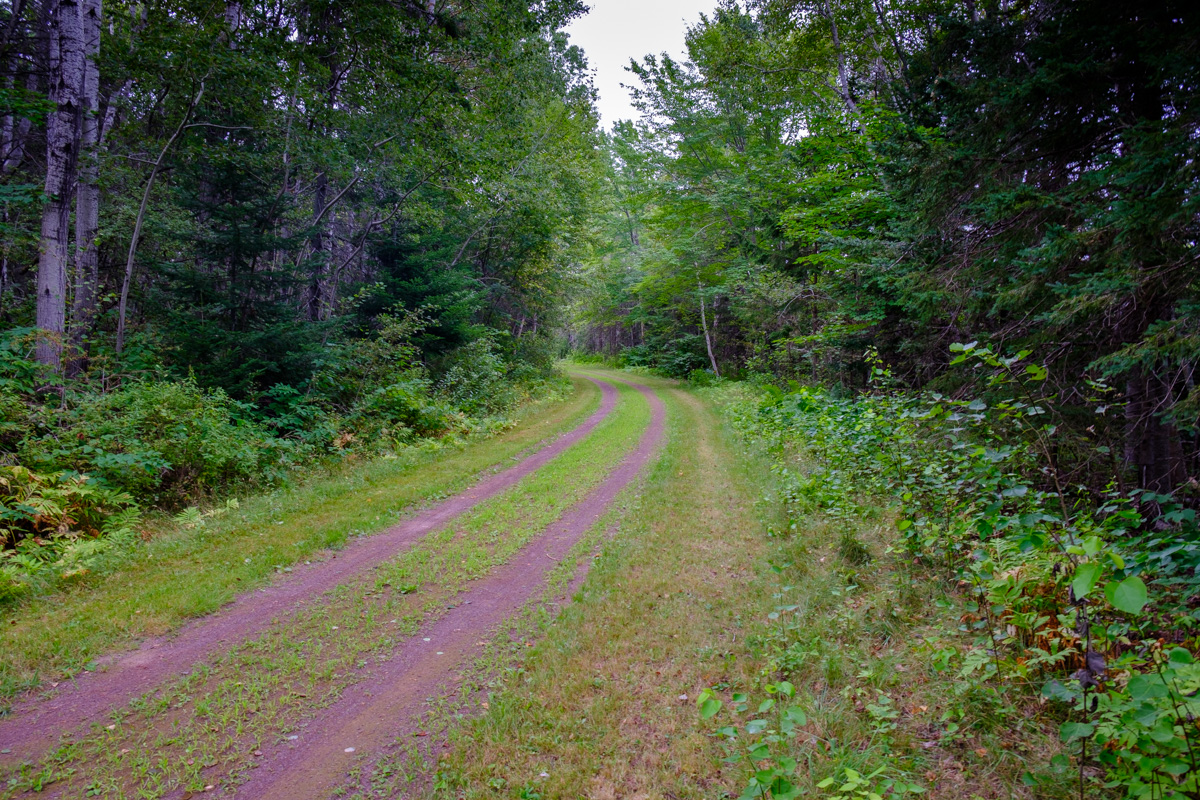 Before embarking on a proper cycle I decided to give my bike a test spin around Brudenell Provincial Park Campground where I was staying. I gave my tires a squeeze. Seemed ok. I gingerly hopped on and pedalled once…twice…hey, this was easy! That’s when I discovered I actually had two flat tires.

That’s also when I discovered that I had forgotten how my tires and bike pump worked. *facepalm* Thankfully, a chipper camper dad saw me crouched by my bike and offered to help. He retrieved his full sized bike pump from his site and with a few pumps I was good as new. Turns out I needed to release the valve first. There’s a reason the saying isn’t “it’s just like pumping up bike tires”.

With inflated tires, I looped lazily around the campground trying to get my bike legs back. The next morning I had a 16+km ride planned, which was a bit ambitious. I would cycle from Brudenell campground to the Confederation Trail entrance and then onwards to Georgetown, around town, and back.

Not going to lie, the first 1.5km was hard. It was mostly uphill getting to the spot where I’d join the trail and I was still getting acquainted with my gears. If the whole 16km was going to be like this I wasn’t going to be happy. Thankfully, once I was on the trail itself I saw the promised, mostly flat, land. 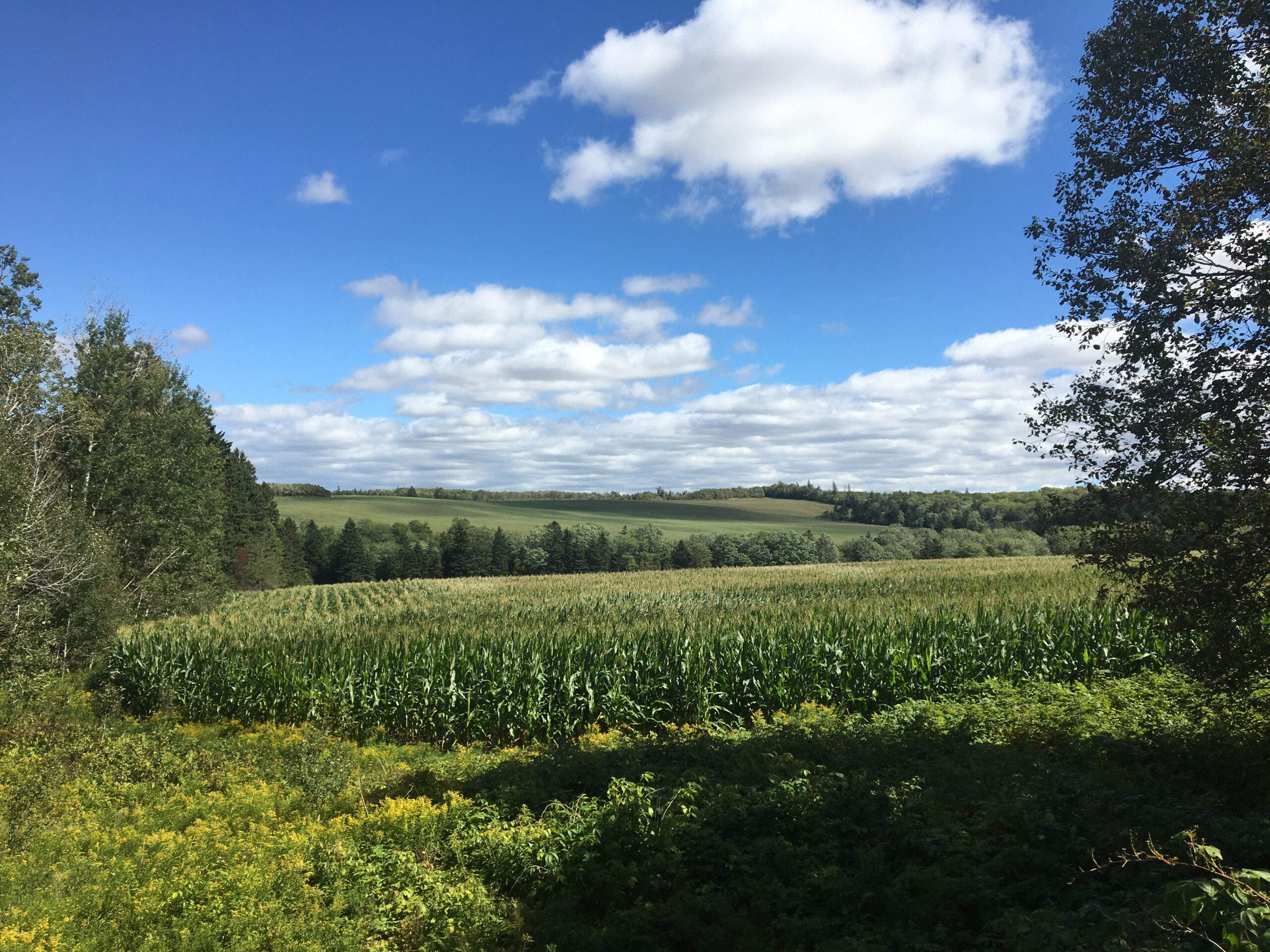 This section of Confederation Trail was two dirt tracks through the grass, lined with trees forming a canopy. The morning sun poked through the leaves making ever shifting patterns on the ground. It was so quaint and pretty that I actually wouldn’t have been surprised to see Matthew and Anne turn the corner in a horse drawn cart. 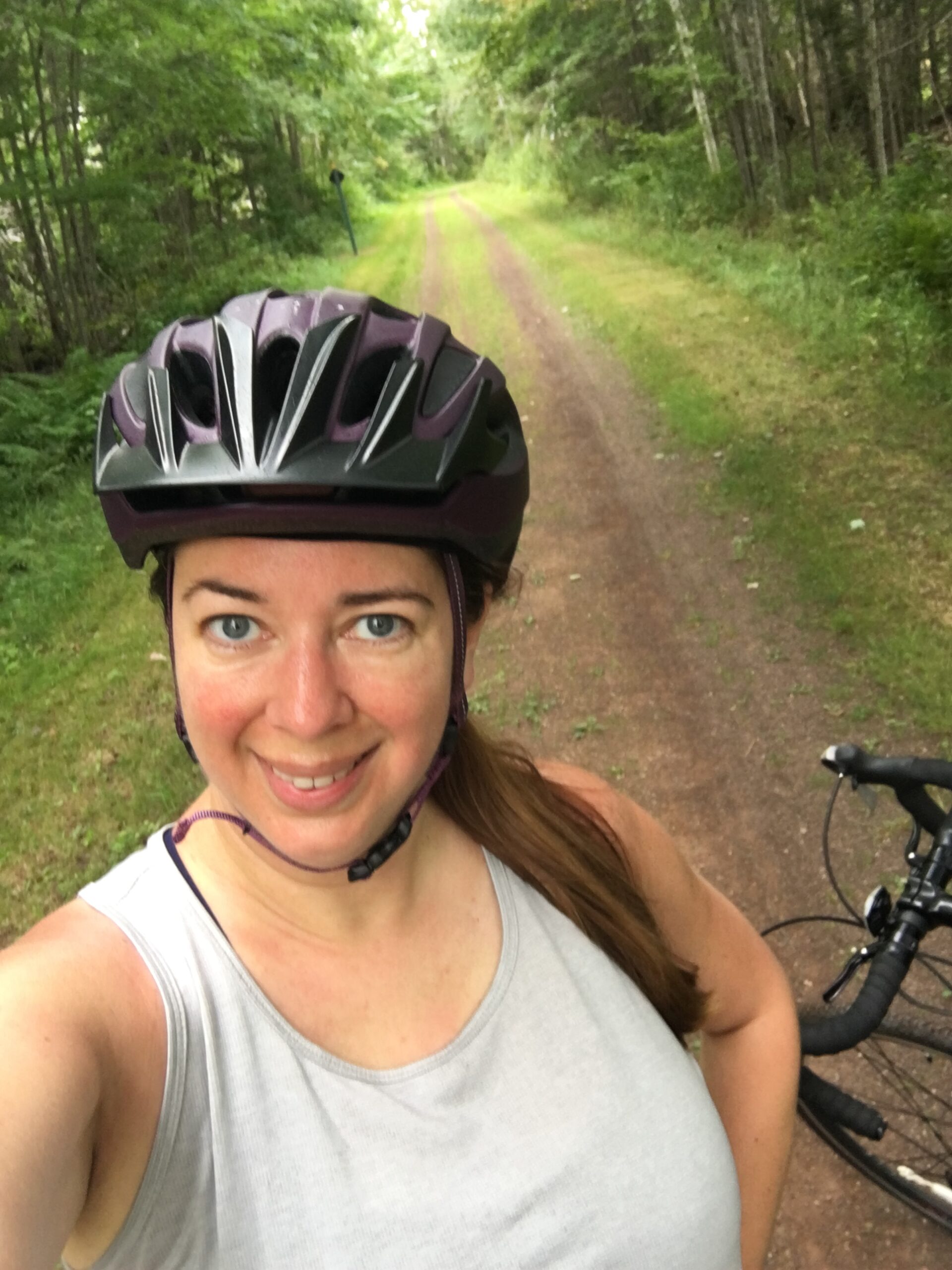 It was peaceful on the trail. The only noise was the crunch of gravel under my tires. I breathed deeply and a smile crept onto my face. I needed this. It wasn’t just that I hadn’t travelled in months and months but the fact that I didn’t know when I could really travel again that was starting to get to me. Taking the road trip to PEI was getting a little piece of my normal back. It felt good to be exploring somewhere new again.

I passed by many a bucolic scene: hay bales dotting large fields, acre upon acre of corn and potato crops, solitary farmhouses standing proud, and long red dirt driveways leading to back fields and cottages. I can easily see how a four day trek could easily feel like a holiday rather than any kind of endurance event.

If you’ve ever wanted to dabble with bike touring but don’t love hills and highways, PEI is the place for you! The Confederation Trail is blissfully segregated from cars and the only hills you’ll see will be off in the distance creating a rolling vista that will make you stop to take a photo.You’ll get long, slow inclines at times, but no hills.

The best part of the trail was not having to worry about cars. I’m a bit of a wobbly rider at times, especially when I’m gawking at scenery, so it was great to have vehicular anxiety removed from the equation. The trail does cross roads fairly frequently but I found that traffic on the two sections I rode was so light and sightlines so good that it wasn’t an issue. Drivers here are unnervingly conscientious too. I once had a tractor trailer stop to let me cross at one Confederation Trail intersection. 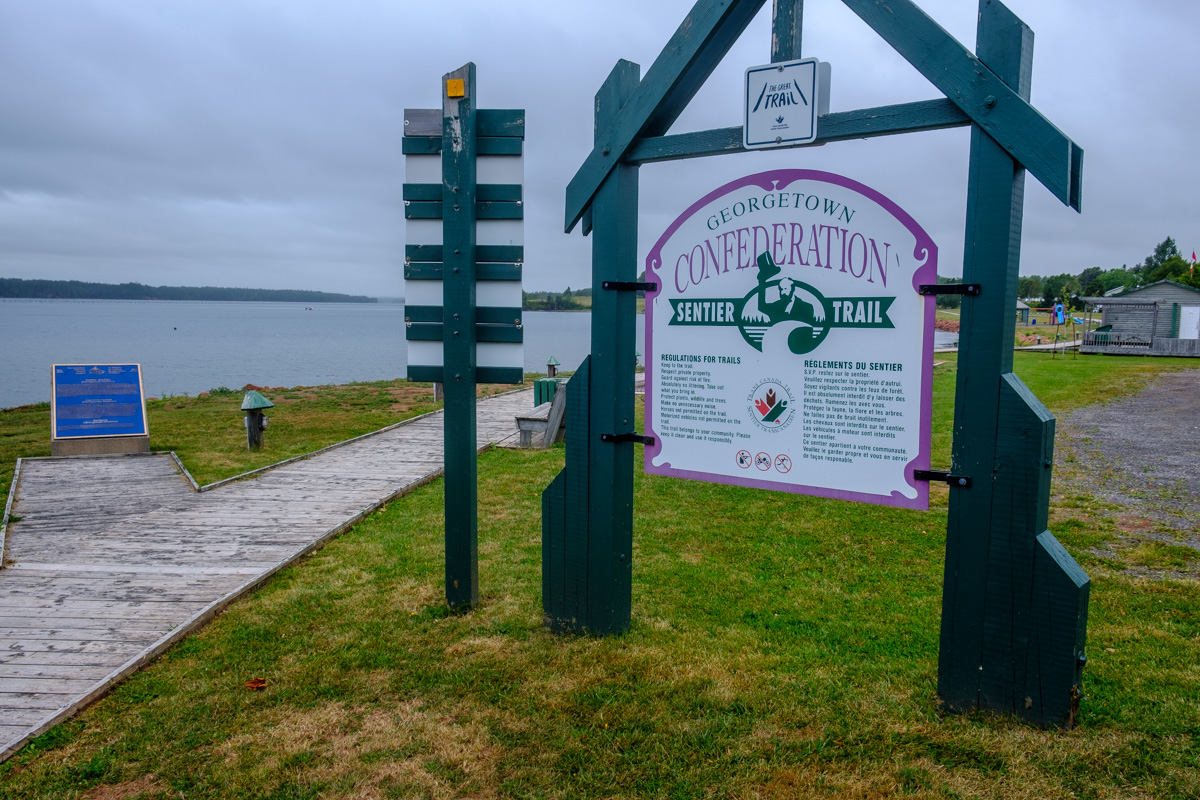 You never need to worry about getting lost here either. The trail is well maintained (in fact, I saw more people performing maintenance than I did other riders) and marked. Just look for the purple gates at the road if you’re even in doubt of whether you’ve veered off the trail. There are distance signposts every kilometre so you’ll always know where you are. Throughout the length of the trail you’ll find a smattering of benches, picnic shelters, and even a few bathrooms.

I would only get a taste of the trail on this trip – 6km to Georgetown and then 11km from Colville Rd to Hunter River – but it would leave me daydreaming of returning next summer in better shape and completing the whole thing, tip to tip, joining the ranks of pedal-pushing, lycra-clad, leisure-seekers.

Maybe I’ll even earn the Tip-to-Tip Confederation Trail Certificate upon reaching the old train station in Elmira. Wouldn’t that be something for the girl who forgot how bike pumps worked?