Under the B…Number Two: Playing Chicken Shit Bingo in Austin 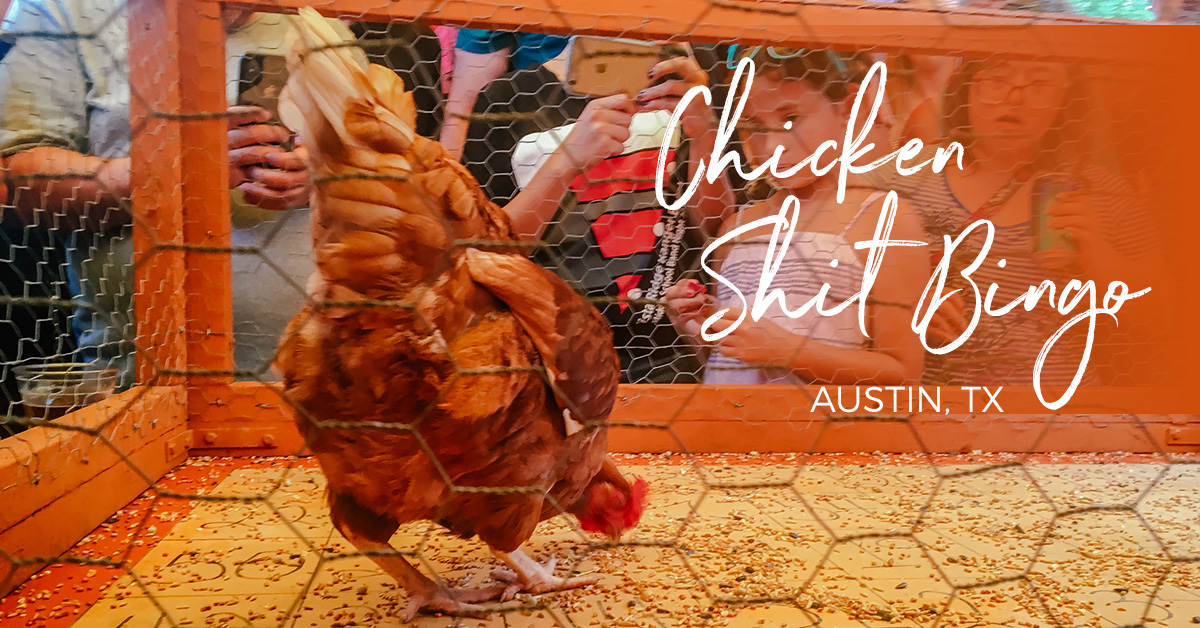 “So you, like, wait for the chicken to walk across your card and poop?” my friend asked, obviously grossed out.

“No, there’s actually only one card and the chicken’s in a cage. You know what,” I mused, “it’s actually more like chicken shit roulette when you think about it.”

Ah, Austin…land of the weird.

I was trying to convince my best friends that they wanted to spend a couple hours of their short visit to Austin waiting for a chicken to poop in the hopes of winning money. I really do love finding the odd and offbeat things to do when I travel so this was right up my alley but I wasn’t sure if my friends would join in my enthusiasm. 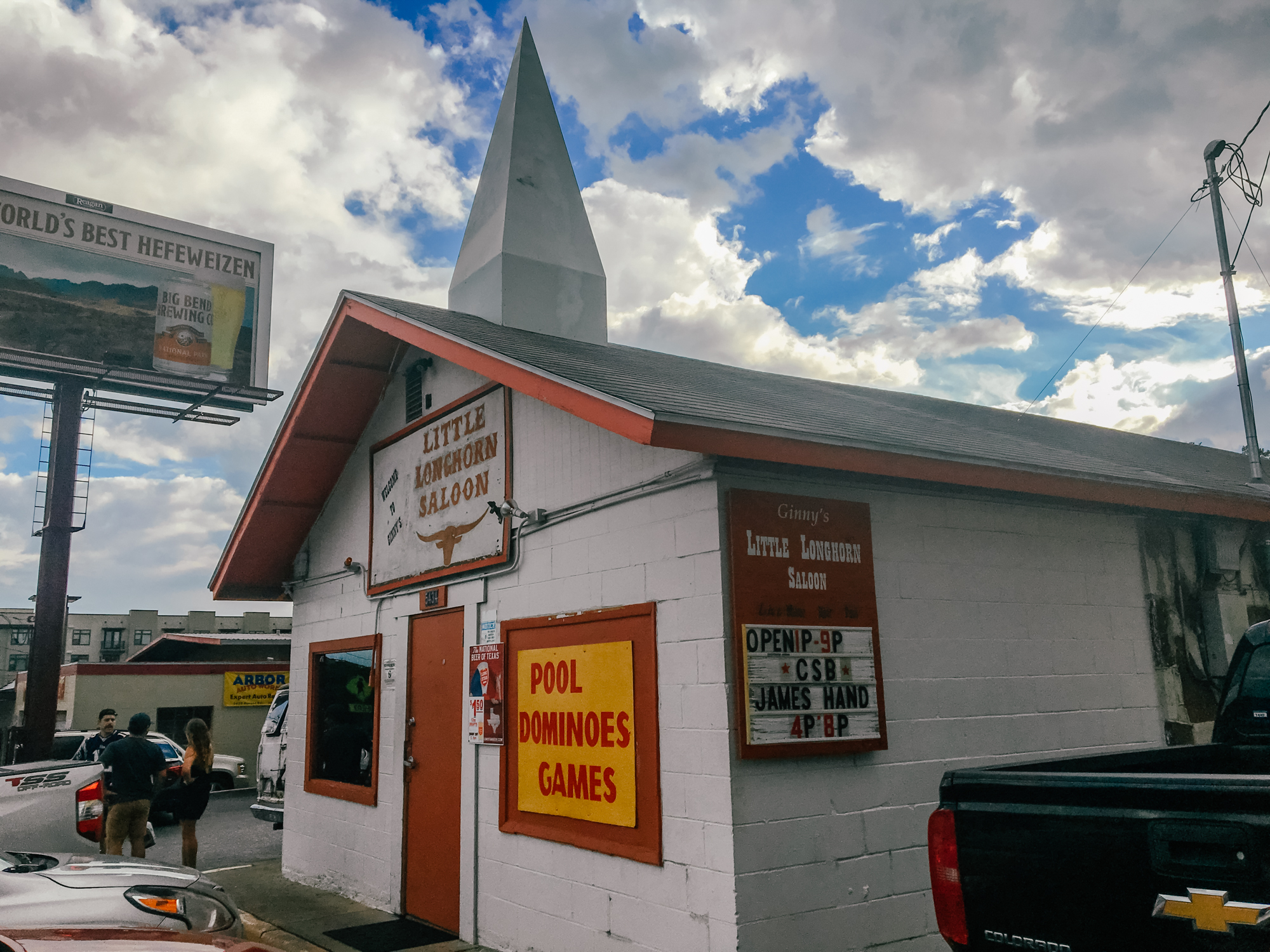 The Little Longhorn Saloon is a classic American dive bar. A tiny orange and white steeple-topped concrete shack on a busy thoroughfare a 15 min Uber ride north of the river. Where they serve up $2 cold beers and have live honky tonk bands like so many other Texan dive bars. But on Sundays, things get weird.

From 4pm-8pm, crowds gather for Chicken Shit Bingo. Musician Dale Watson brought the game idea with him from California as a way to entice people to come down to the bar on Sundays. Despite previous owner Ginny’s decree that “it’ll never last”, it works and continues to work almost 20 years later. 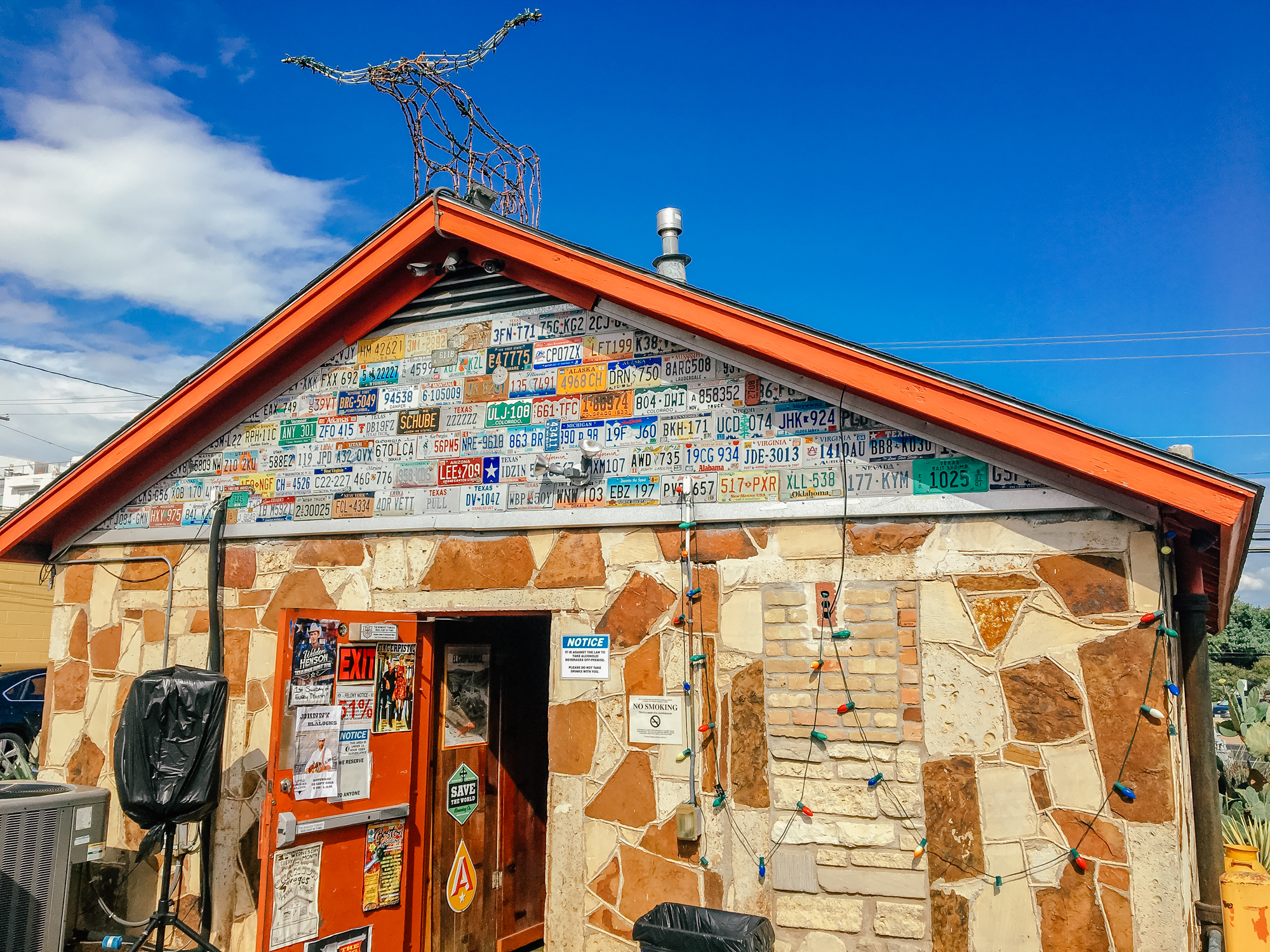 The rules are pretty simple. There are four rounds. For each round, you line up to buy a ticket with a number on it. Once the tickets are all sold the game begins. When the chicken shits on the card, the winning number is called, and the round is over.

Amazingly, my friends agreed to indulge my weird interests so on Sunday afternoon we summoned an Uber and got ourselves to Burnet Rd. The bar is pretty nondescript when you’re driving by if you don’t know to look for the steeple, so we missed it on our first pass and had to double back. Our driver had never heard of Chicken Shit Bingo before. 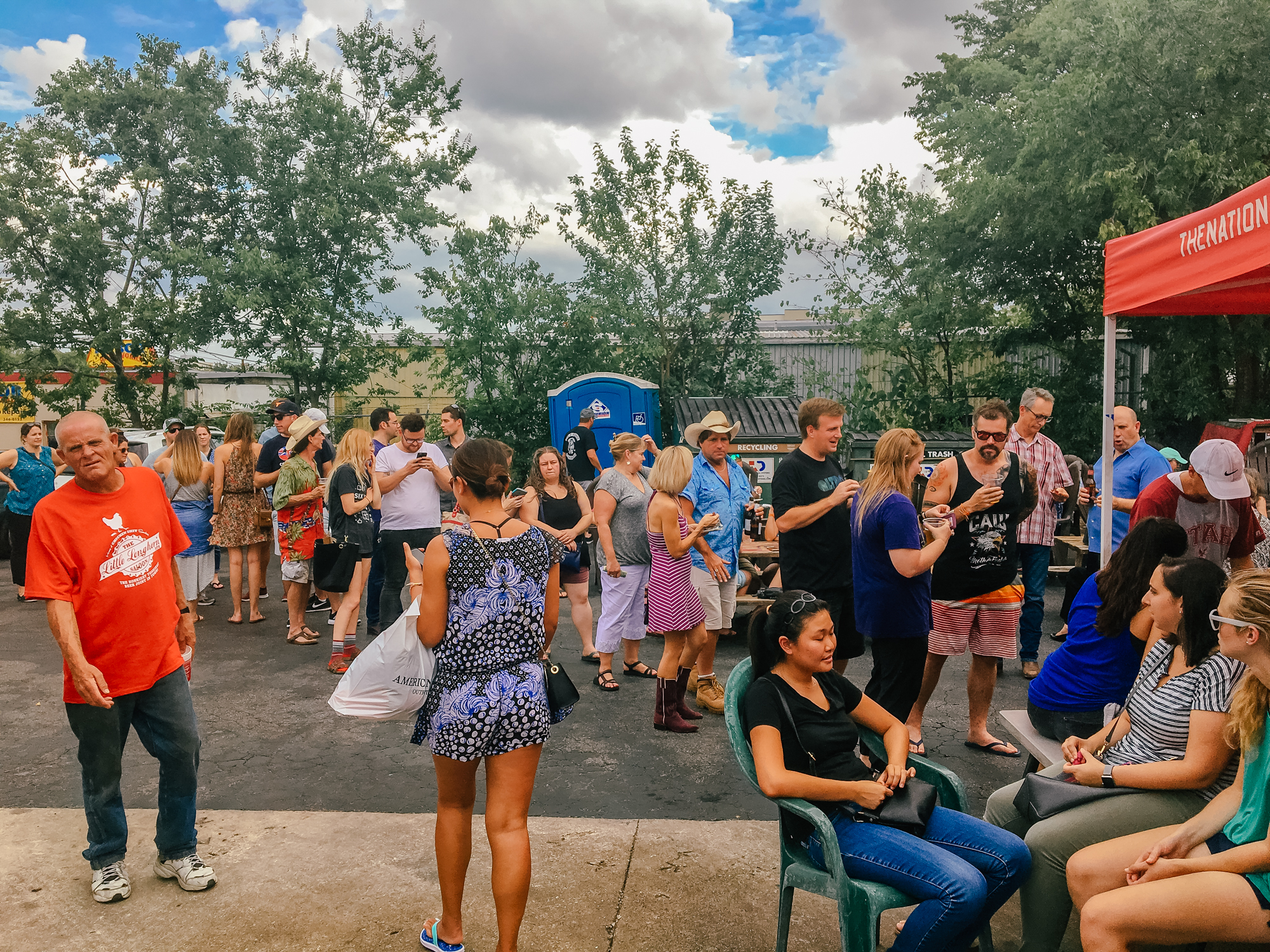 I tumbled out of the Uber and saw that they’d just called ticket sales for the first round so I rushed to claim a spot in line. I knew they were likely to sell out and since I wasn’t sure how long we’d stay I wanted to make sure I got in on the action. The hot Texas sun beat down on us as the line inched forward in the parking lot behind the saloon. When it was my turn I handed over two dollar bills in exchange for a small yellow paper ticket with 28 written on one side in black marker. 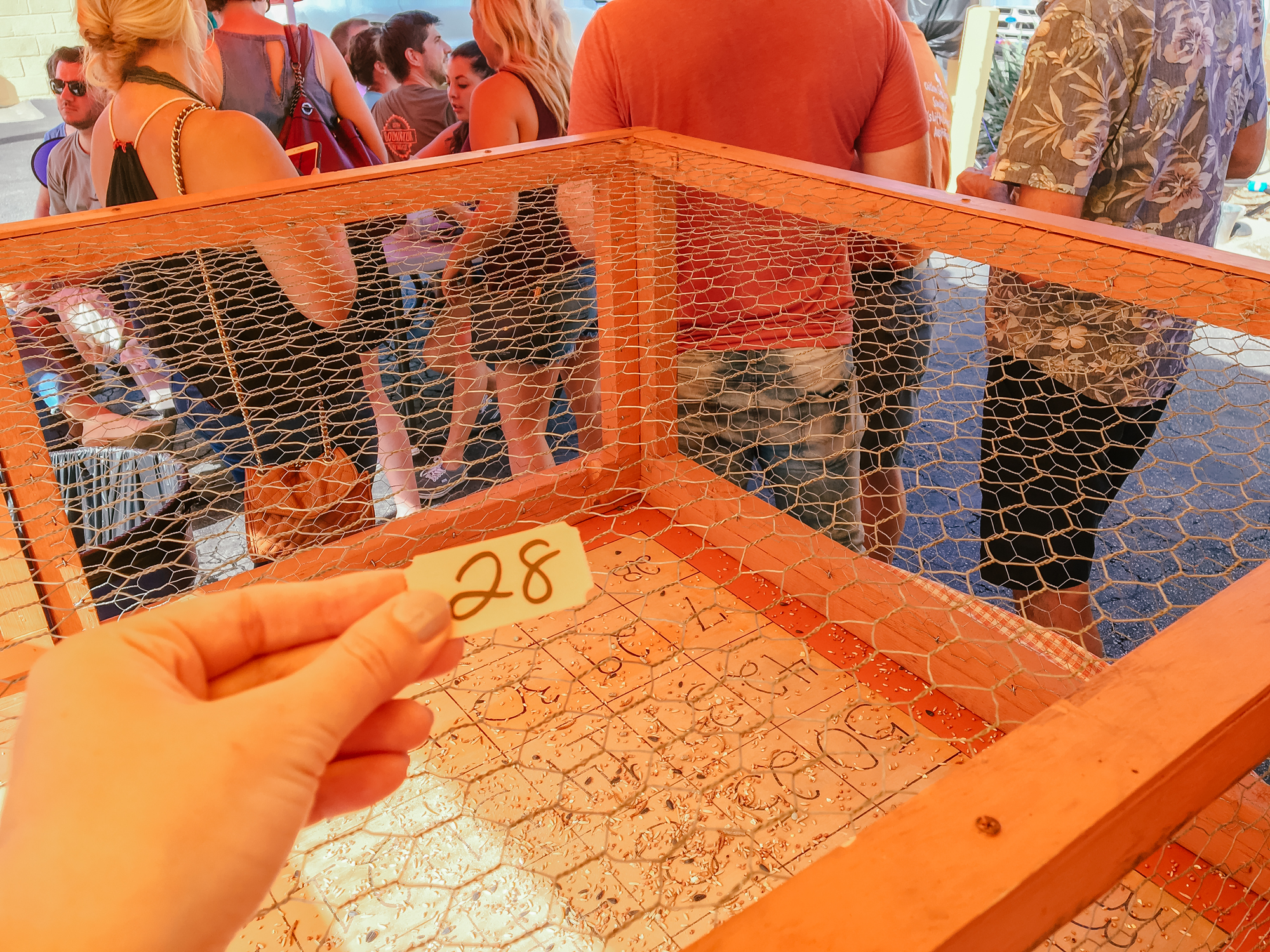 Transaction complete, I tucked my ticket into my back pocket and strolled over to inspect the focal point of the action: the bingo cage. It was a 4’x5’ wooden frame with a small door near one corner, balanced on a plastic picnic table shaded by a yellow pop-up canopy tent advertising Shiner Bock beer. The orange paint of the cage was rubbed away on the edges from years of hands and forearms leaning on it, waiting for a chicken to do its thing. The walls and roof were chicken wire, the floor was plywood with a grid of numbers drawn on, strewn with chicken feed. All it was lacking was a chicken.

Once it was announced that tickets were sold out a crowd started to form around the cage. I jockeyed for a good spot, not wanting to miss anything during my first ever round of Chicken Shit Bingo. I found 28 on the grid and tried to visualize a chicken taking a dump on it. Gotta see it to manifest it, right? Soon, the crowds parted as the Chicken Shit Official brought forth a black and white striped chicken and placed it in the cage.

The game was on! 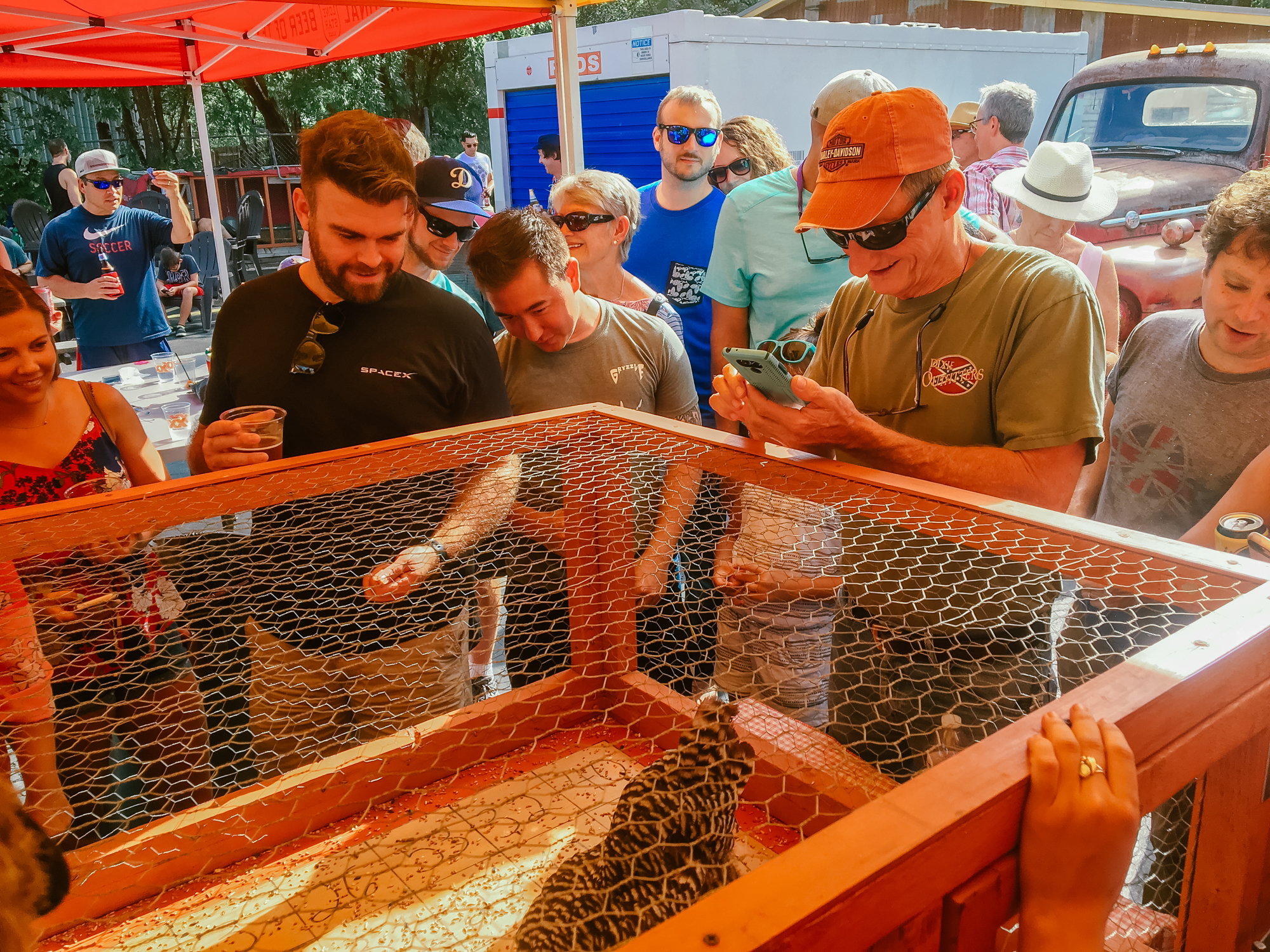 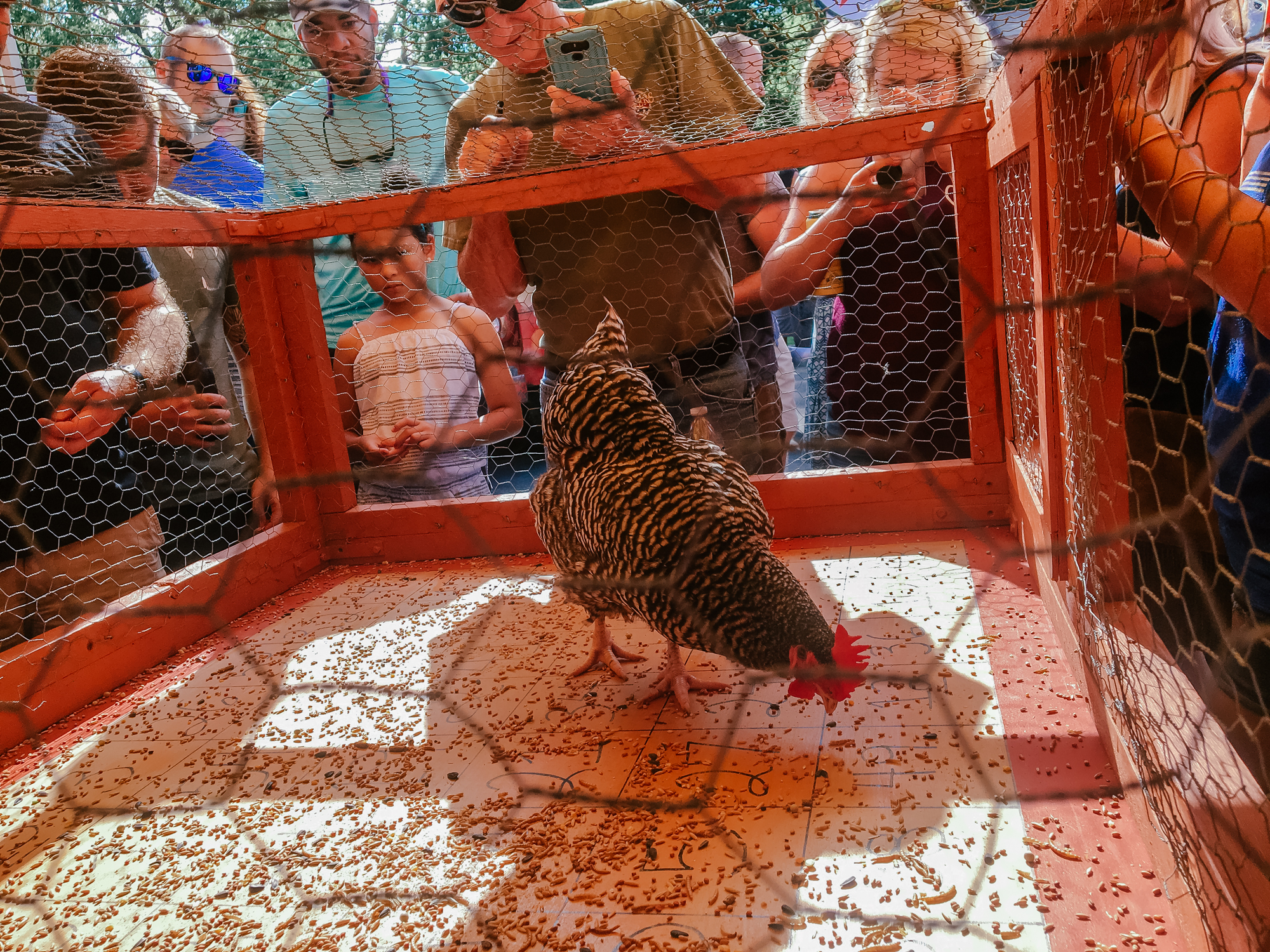 Some people snapped photos. Some tried to encourage the chicken to peck its way over to their number. “To the right! To the right!” “C’mon 14!” “Bok bok! Over here chicken! Bok bok!” The chicken just continued to gobble up feed hither and yon.

Two minutes in, a woop went up from the crowd. There on number 34 was a fresh dollop of bird poop. Um, ew. But also, d’oh. That was definitely not my number. As the winner came forward to claim their prize, the chicken was removed from its buffet and its prize giving offering wiped up. A bit more feed was sprinkled around and we settled in to wait for round two. 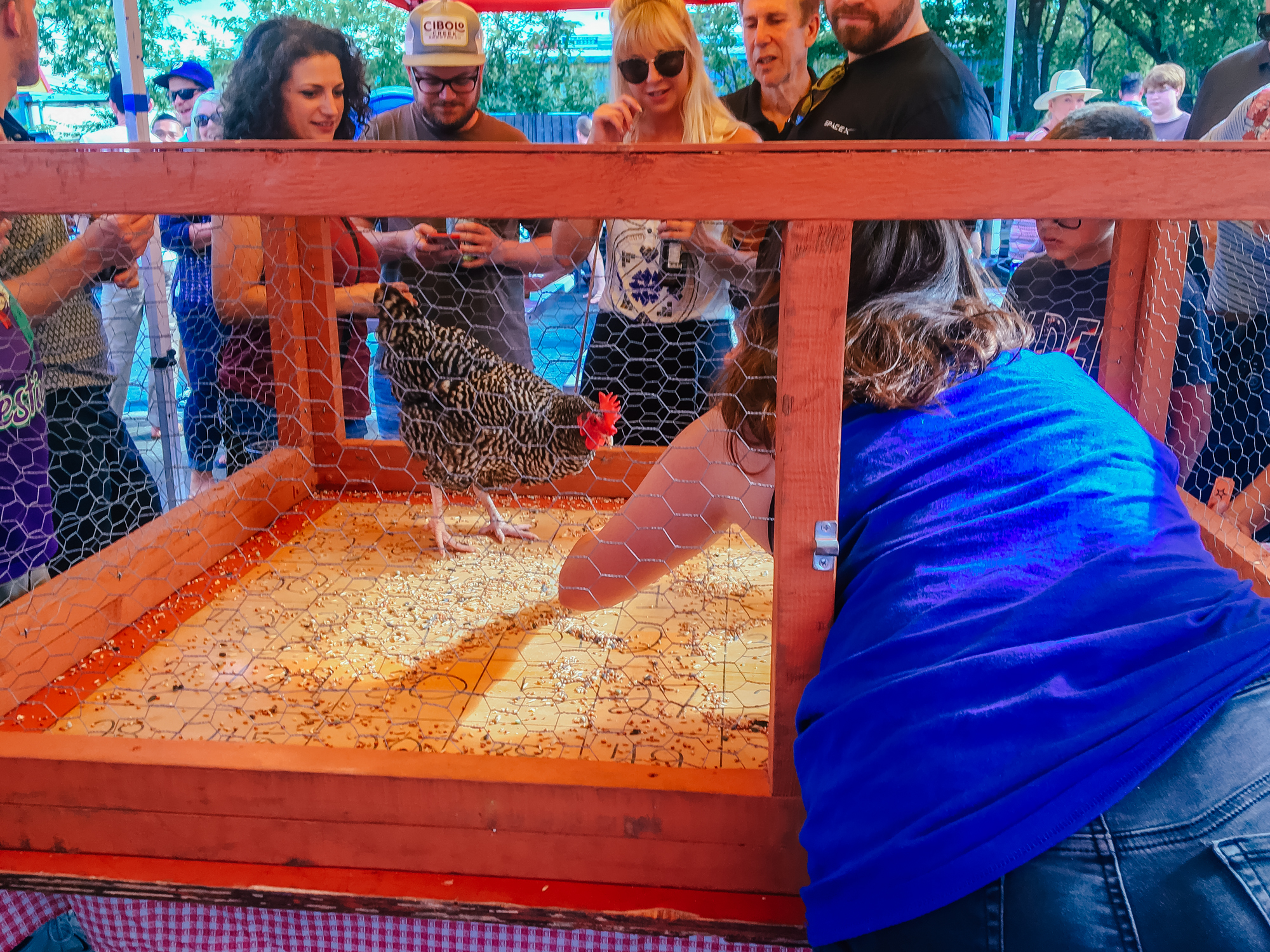 During the break I decided to get myself a souvenir beer coozie and a cold brew to commemorate the occasion. Little did I know that I’d end up coming home with half a dozen coozies from different events during my week in Austin. Texans love their beer coozies.

There was a bbq fired up and people were milling around with hot dogs and plastic cups of cheap beer. Speakers had been set up to pipe the honky tonk band playing on the indoor stage to the back lot. It had a vague neighbourhood block party feel. 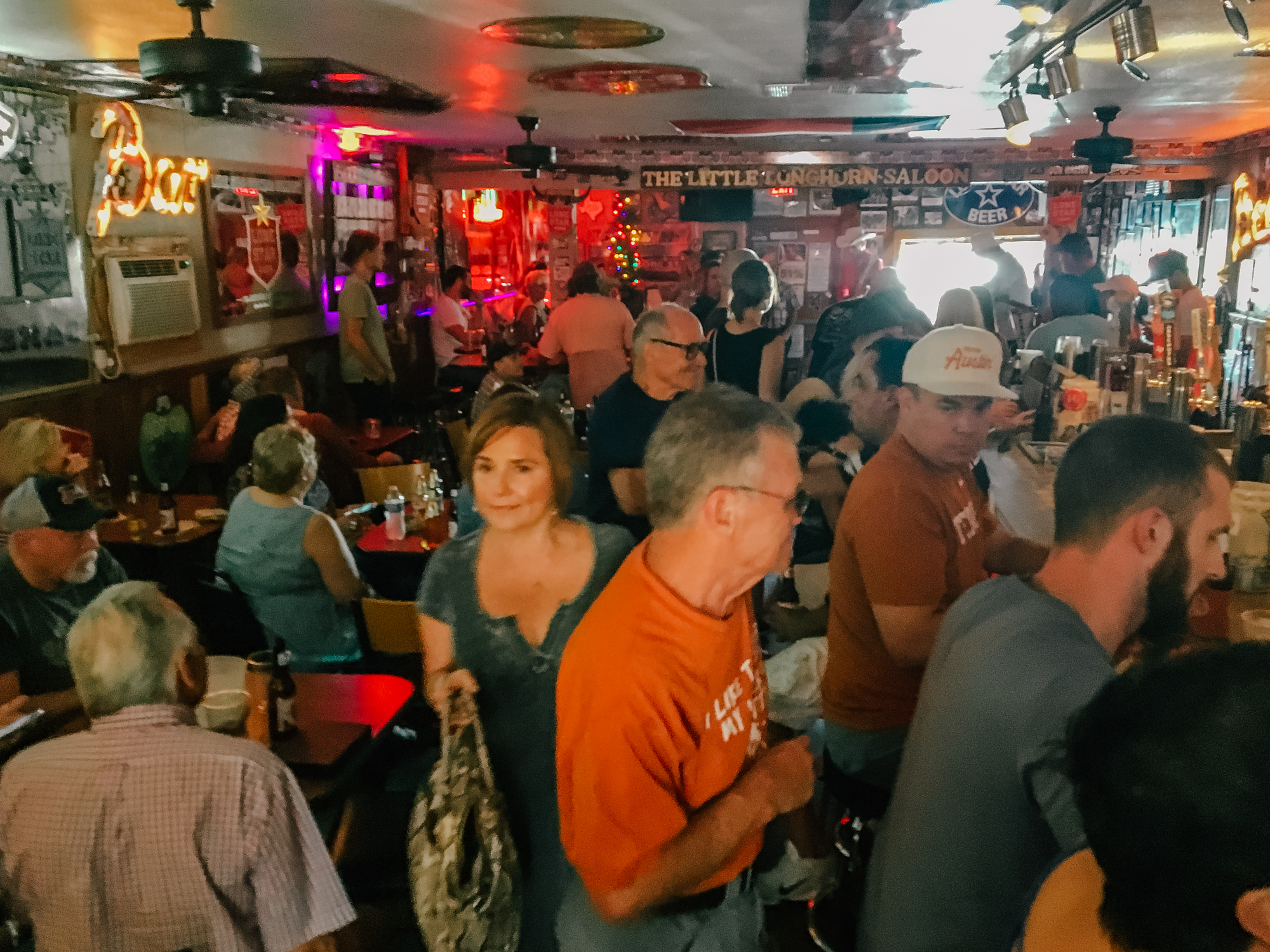 I decided to check out the inside of The Little Longhorn Saloon. It was like another world. It took my eyes a few seconds to adjust to the dim light in the low ceilinged room after being outside in the bright afternoon sun. Four ceiling fans and one lone AC unit whirred away in an effort to keep the sweltering heat at bay. The walls were covered in beer advertisements and a soccer game played on the flatscreen tv mounted to one wall while the band was stationed on a low stage in the far corner. Tables were full with people snacking from bags of popcorn, no doubt stuck to the padded vinyl chairs they were sitting on. The feel here was more Newfoundland legion or bay wedding and I wasn’t hating it. 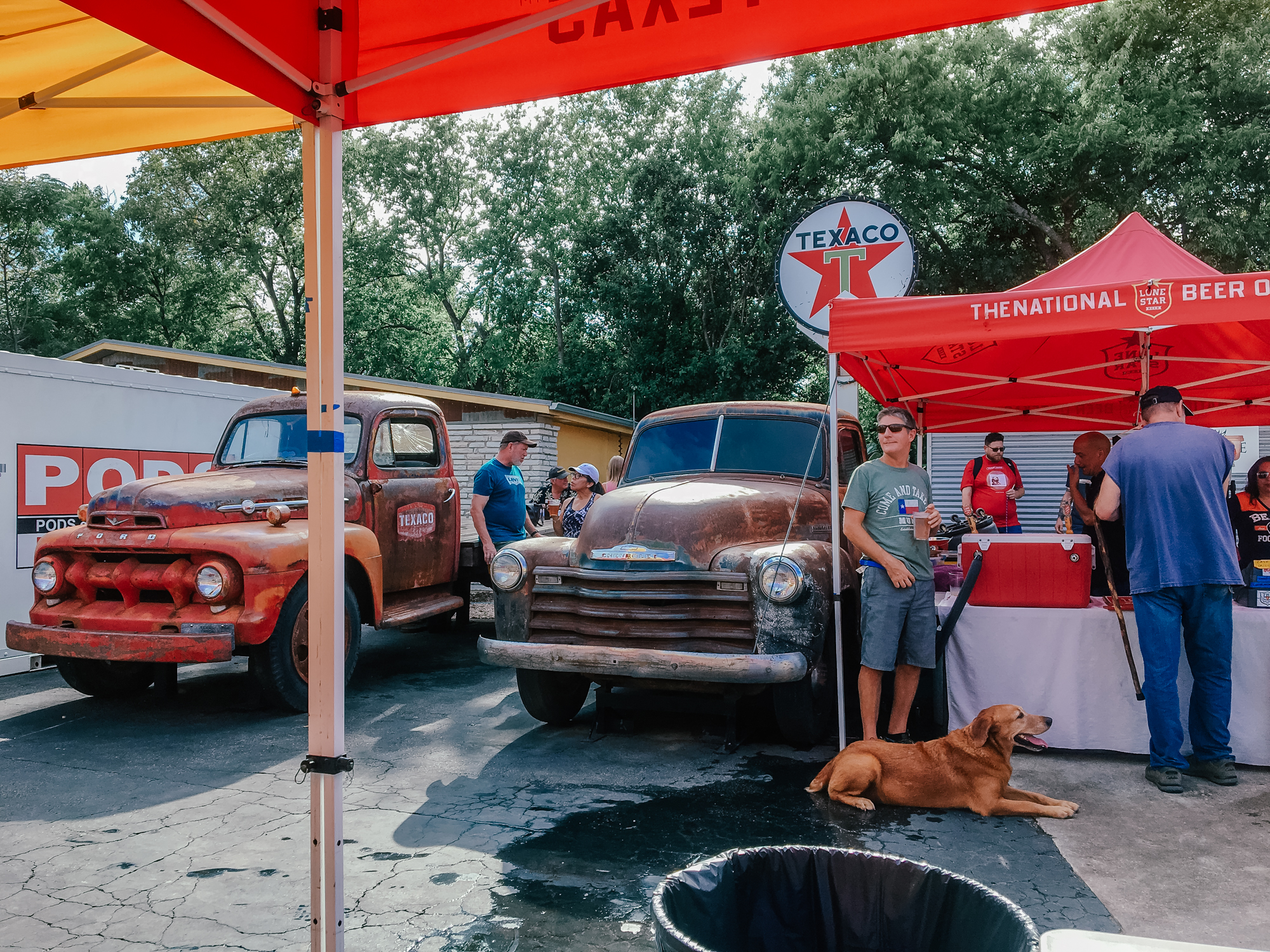 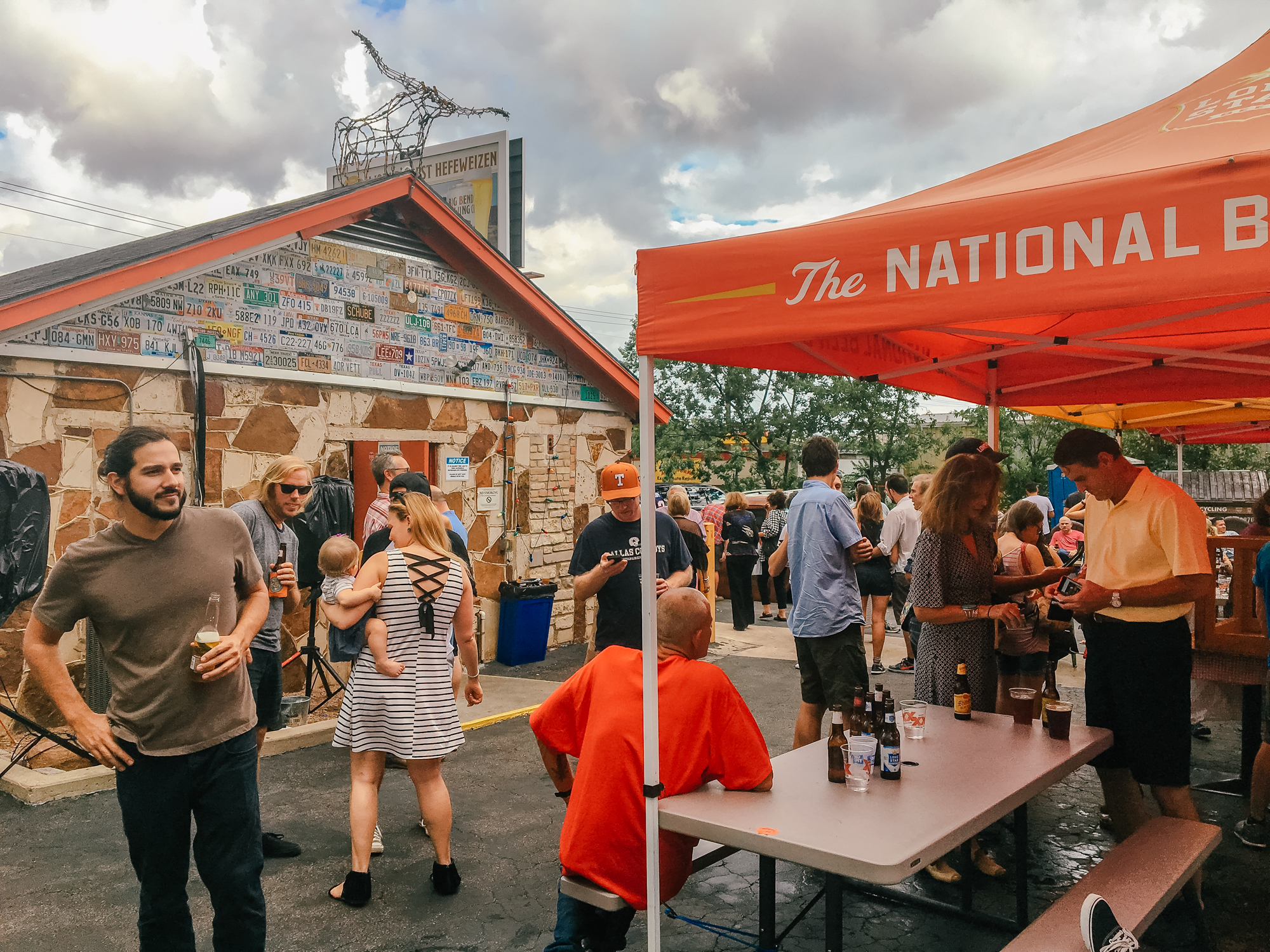 It’s hard to say the ratio exactly but there was definitely a good mix of regulars and tourists at the Little Longhorn Saloon that Sunday afternoon.

Round two was called and it was time to line up again. This time the crowd was bigger. I parted with two more dollar bills and this time was handed a red paper ticket. This time the chicken was shades of brown. This chicken took its time. It was a full 5 minutes before she did her business…but again, not on my number. 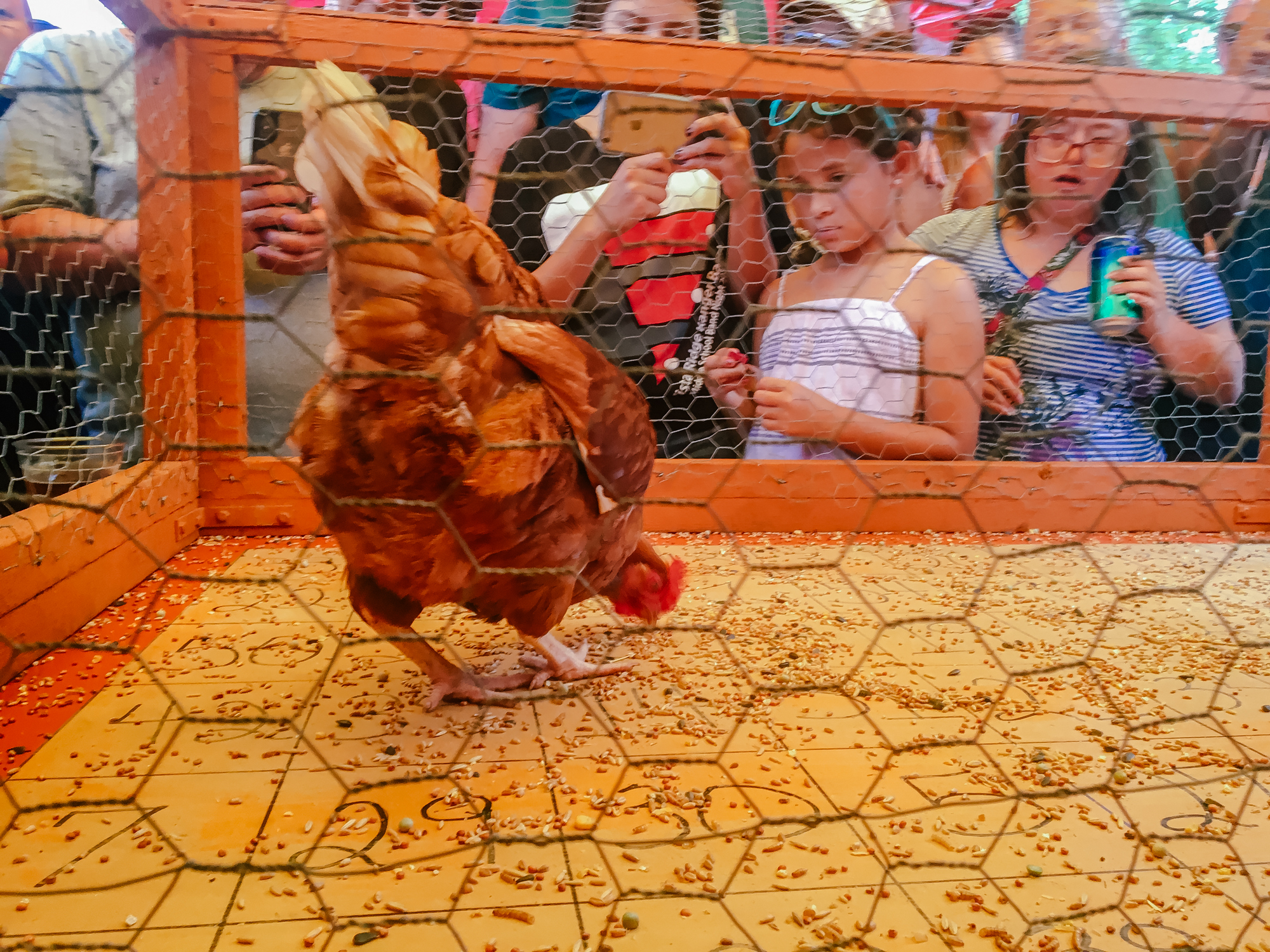 We decided to call it quits after that and head off in search of supper. I’d got what I’d came for: an offbeat experience where I paid to watch chickens poop. 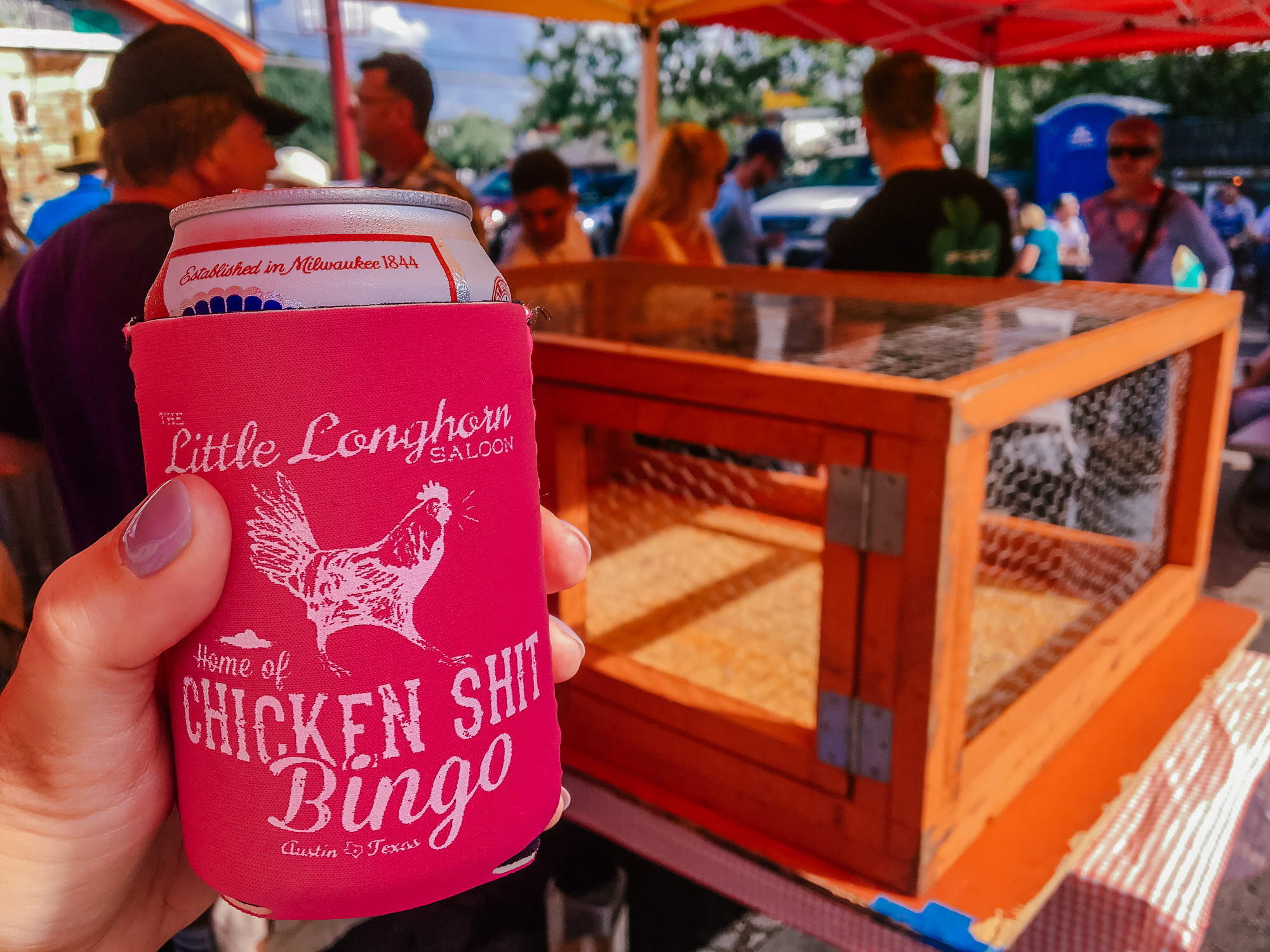 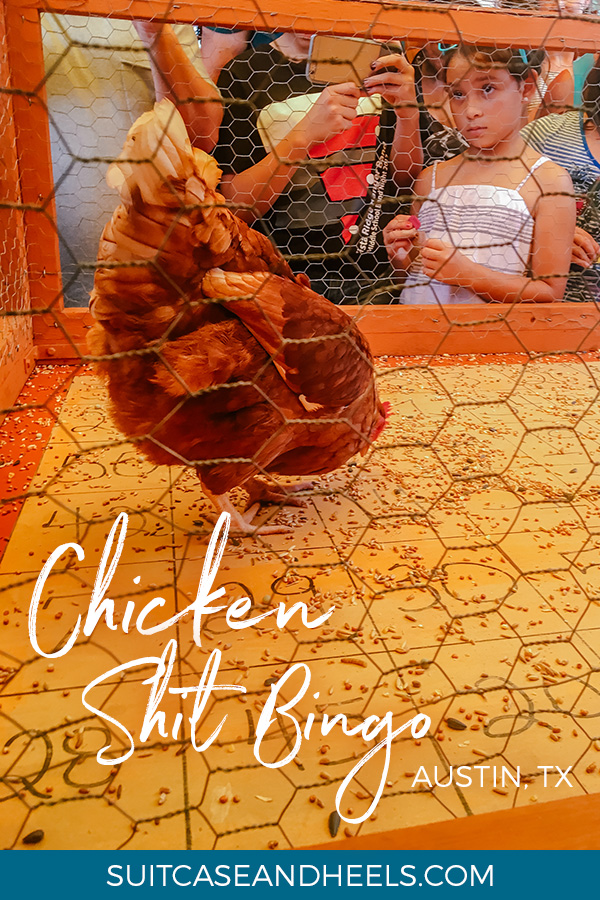 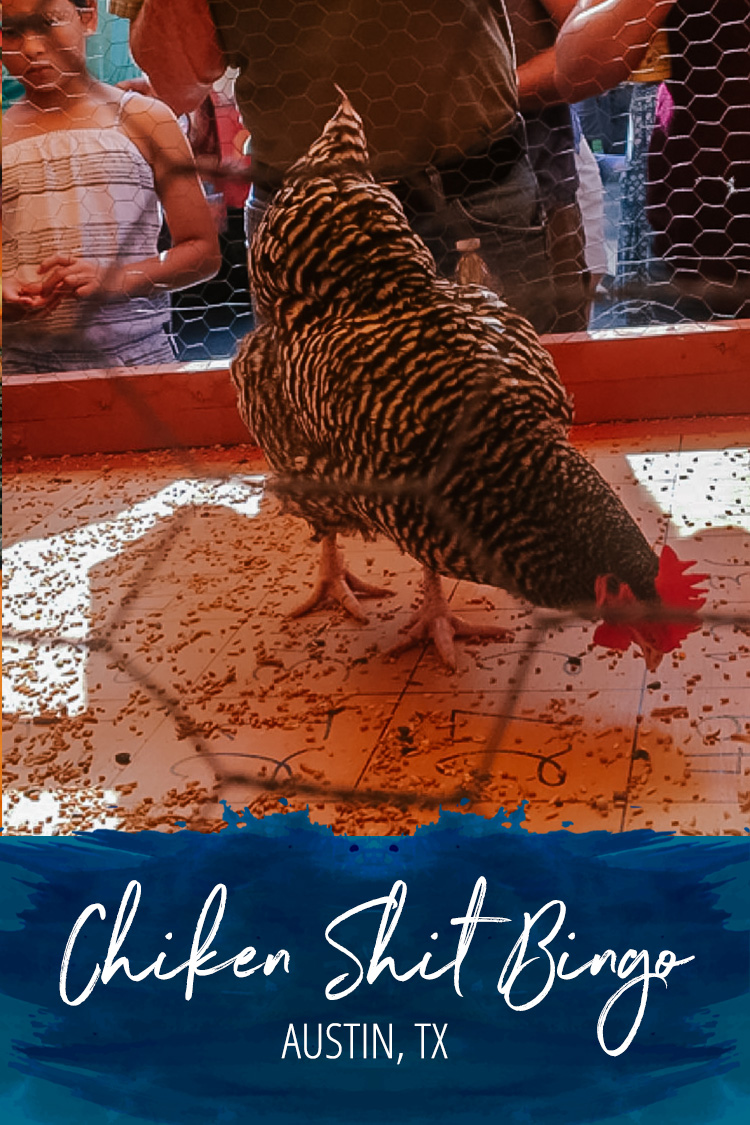