Chasing the Ace in Goulds

A hush fell over the crowd of thousands huddled in the church hall parking lot, spilling over into the streets. A voice came over the loudspeaker and announced the seven numbers that could potentially add seven digits to someone’s bank account.

For the past couple of months masses of people have descended on a small farming community just outside of St. John’s, hoping to change their lives at the local parish hall. They’re not religious fanatics on a pilgrimage. They’re chasing the ace.

Chase the Ace is a fundraiser lottery game that’s taken Newfoundland by storm over the last few years. So far this year, there have been 283 Chase the Aces licences issued. Many games end without wide coverage but sometimes the ace is stubborn and the jackpot grows and grows each week, attracting more and more attention. That was the case with McIvers ($725k jackpot) and Bay de Verde ($733k jackpot) in 2016. Right now it’s Goulds that’s in the grip of Chase the Ace mania. The jackpot currently stands at over $1.7 million with a 50/50 draw prize of over a quarter million. 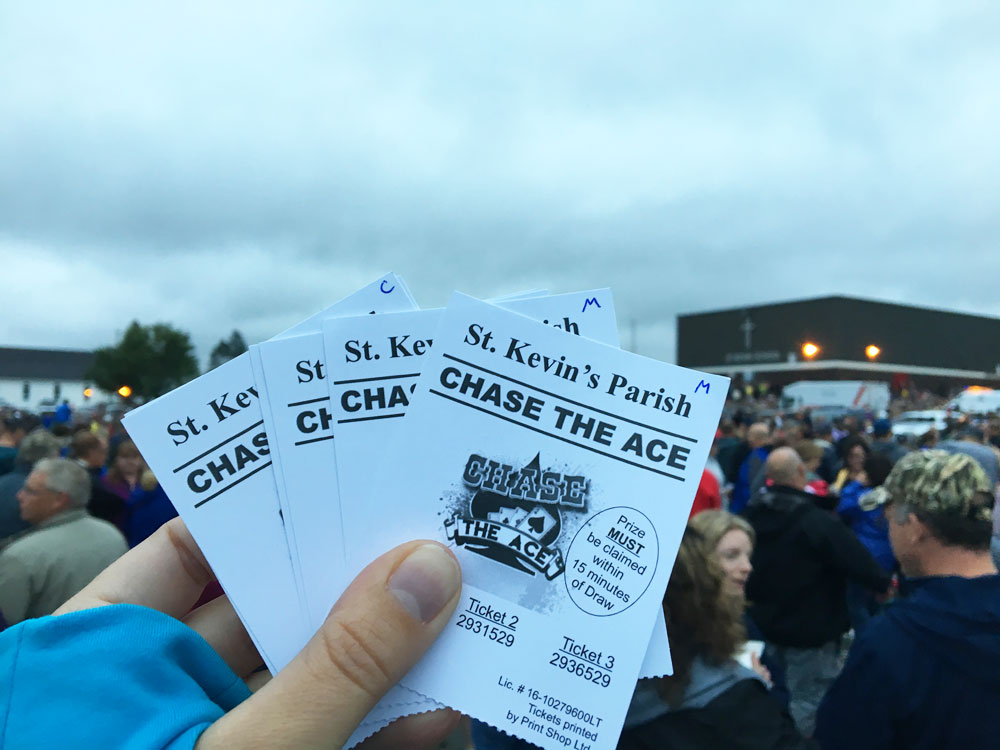 How You Play Chase the Ace

Tickets are sold on the day of the draw. 50% of the money brought in goes to the fundraiser, 30% of the money goes into the jackpot, and the remaining 20% is set aside as a consolation prize for that night’s contestant.

If your ticket number is drawn, you have 15 minutes to present yourself for your chance to chase the ace. A deck of cards is laid out face down and you choose a single card. If it’s the ace of spades, you win the jackpot. Hurray! Otherwise, your card is removed from the deck, you take home the consolation prize, and the game continues for another week.

In theory, a single game could last as long as 52 weeks. It could also only last a single week. It’s a bit of a crapshoot for fundraisers. The Goulds Chase the Ace is down to nine remaining cards. 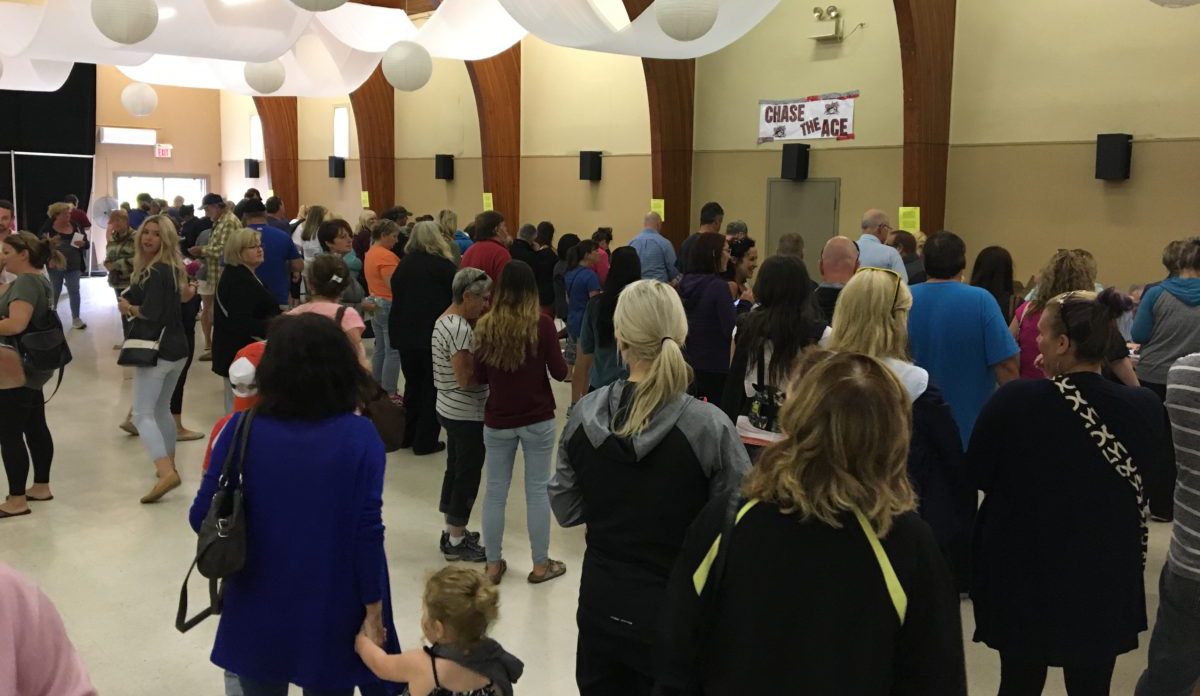 After watching the hysteria from the comfort of my own home for the past two months, I decided to finally take part and see what it’s all about.

Tickets go on sale at 9am on the day of the draw, with folks lining up super early but there’s really no benefit to being first to buy tickets. There are enough printed to go around. I took my lunch break to drive out to the Goulds and while traffic did slow down significantly the closer I got to the hall, it was quite manageable. I could’ve parked in the hall parking lot but I decided to pull in further up the road and walk 5min instead. Once at the hall it was completely smooth sailing with no wait at all. Buy your 50/50 tickets on one side of the hall ($1/each sold in bundles of five) and Chase the Ace tickets on the other (3/$5). I put down $10 on 50/50 and $20 on Chase the Ace. About the same as a meal in a mid-range restaurant.

Tickets in hand, it was a quick getaway out of town. The real traffic test would be later that night.

I met up with friends to carpool to the draw. We arrived just over two hours before the numbers would be called, but even so, traffic was so backed up we ended up parking almost 3km from the hall. Comfortable shoes are a must. Since the crowds have grown so large, a local radio station has started broadcasting the draw so now a lot of folks stay in their car, but where’s the fun in that? Plus, this way we got our Fitbit steps in.

As we got closer and closer, the crowd grew around us. There was a festival vibe not unlike the Regatta. Kids ran down the middle of the closed off main road. Tweens buzzed by on their scooters. Food vendors had popped up like weeds after a good rain. There was such a crowd outside Keith’s Diner that you’d think Blake Shelton had arrived a week early for his concert and was inside chowing down on fi’ n’ chi’. Buskers had also jumped on the opportunity and were engaged in song battle across the street from one another.

We found the shortest food line and a half hour later ate our greasy pizza standing up in the parking lot. Sitting is a luxury not afforded to many when you’re chasing the ace. We moved from the pizza joint parking lot to the church hall parking lot to wait for the big draw. 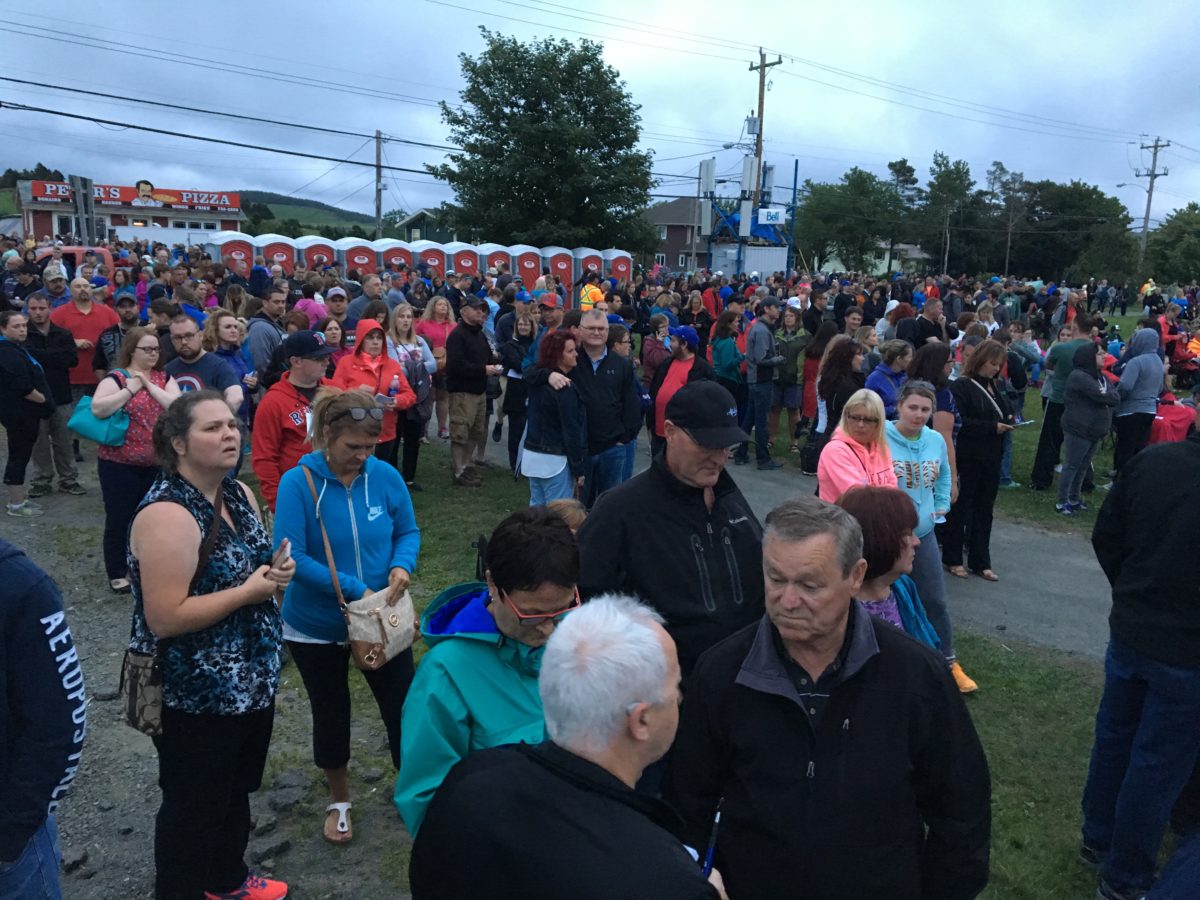 An hour to go.

The mood was jovial and upbeat. Funny what million dollar dreams can do for crowd morale. People chatted about what they’d do with the money. How they’d be content with the $280,000 50/50 draw prize or the $210,000 consolation prize. Me? I’d pay off my mortgage, pad up my bank accounts, go on an epic trip, and then sock the rest away for the future. I didn’t even dare think about what I’d do with the $1.7 million jackpot. Go to the Maldives first class with Emirates probably.

The crowd grew and grew, but never became claustrophobically close. Traditional Newfoundland music played from the loudspeaker. People milled about. A bit like a giant backyard BBQ with a few thousand of your closest friends.

Half an hour to go.

Every ace chaser has their own method of organizing their tickets. Some, like me, who have small lots don’t need to do much at all, while those with stacks of tickets will copy all the numbers to one sheet of paper for easier scanning. I even heard of one person who entered them all into a spreadsheet and then when the number was called would just do an instant search. That takes the magic and suspense out of it though. Robs you of those precious seconds where you can believe that you might actually be the winner. Like Schrodinger’s cat, until either you scan all your tickets or someone else comes forward, you are both the winner and the loser.

In my case, that fantasy world lasted all of a half second. You see, my seven digit ticket numbers all started with 29 and the winning ticket started with 27. *womp*womp* Four hours of traffic, walking, standing, more walking, and more traffic for a half second of suspense. 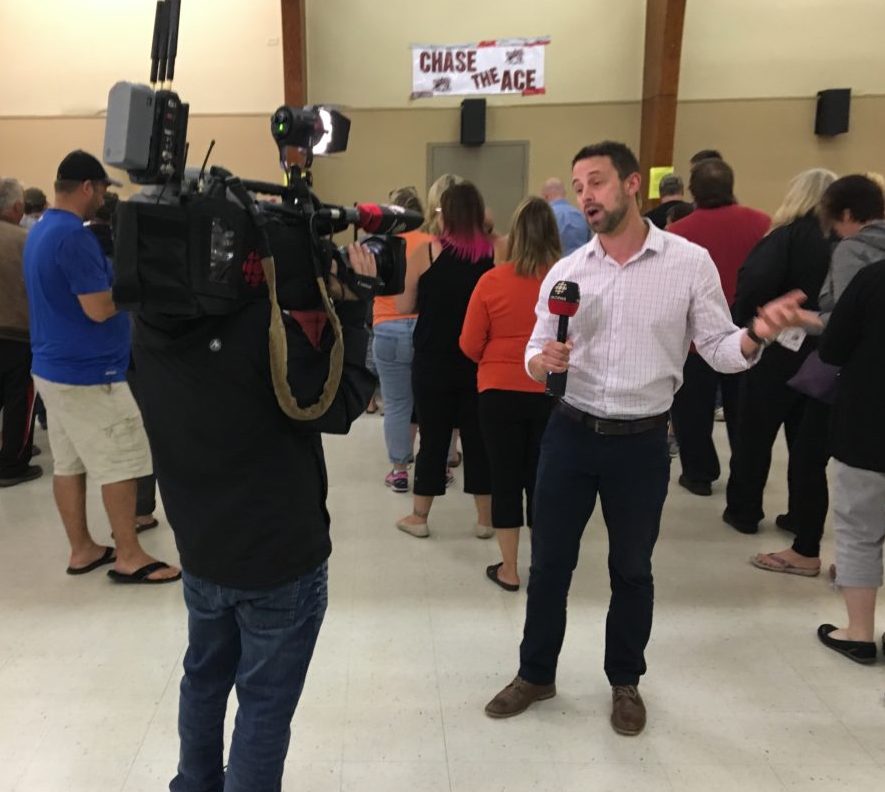 Local news are on hand all day covering the Chase the Ace madness.

Like a dam bursting, people immediately started flooding out of the Goulds trying to beat the traffic home. We were a bit more practical, we knew we’d be stuck in traffic anyway so we decided to stick around and watch the winners arrive and see if the jackpot would go.

To help with the congestion, two satellite centers were set up within a kilometer of the hall. Winners there would be escorted to the main hall to collect their cheques and draw their card. It took longer than normal, but eventually they arrived on foot with a volunteer escort. It was like watching the end of a marathon. People lined the route and cheered them on. No sour grapes here.

They disappeared into the hall so my friend pulled out her phone and brought up the live Facebook video feed so we could continue to watch. We crowded around the phone and before long we felt a presence behind us. Another group was peeking around us to see the footage. So we made friends and all watched together. I love that kind of stranger camaraderie that these type of events bring about.

The loudspeaker narration was ahead of the video feed but we saw the winner point at his chosen card and then heard, “And it’s the ace…” Huge cheer from the crowd. “…of diamonds.” Collective groan from the crowd. Elation to frustration in 0.5 seconds. Even though we weren’t the chosen one we wanted to stay and bear witness to the historic event.

Over for another week, we headed back to the car. “Was it really this far of a walk on the way in?” Just think about the step count. Red tail lights strung out before us on the road like the world’s largest Christmas decoration. It would be a slow drive home.

Was it worth it? Oh yeah. You can bet I’ll be back in the Goulds this week for my chance to chase the ace. Someone’s gotta win and it just might be me.

I’ll wave to you on my way to the Maldives.