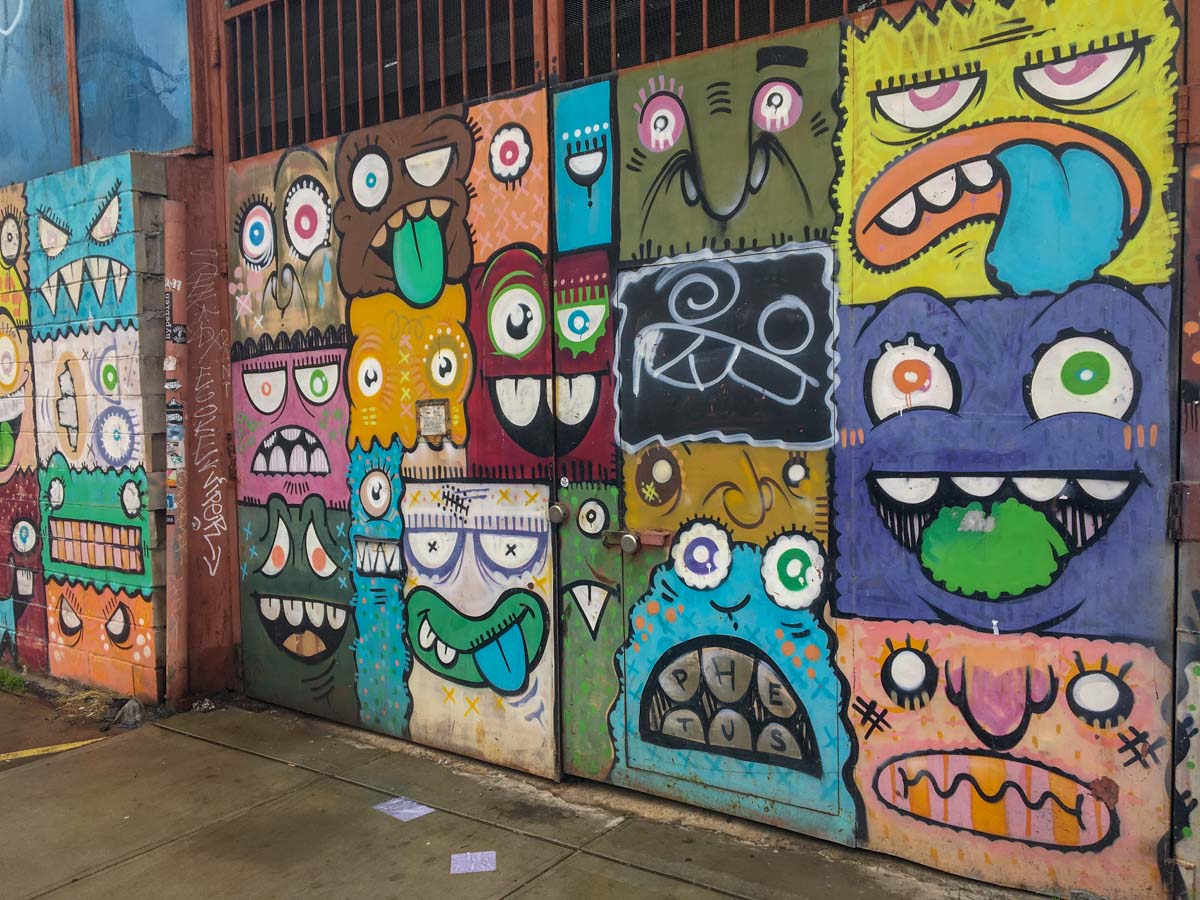 My flight out of New York wasn’t until almost 6pm so I had most of the day to explore. I was all shopped out and the sun had finally come out so I didn’t want to hang out in a museum. But I knew just what to do. Street art! I’ve always enjoyed coming across street art when I was travelling but after taking a tour in London the other year I’ve developed a keen interest in it. I still get a thrill when I spot work by an artist I recognize, whether it’s seeing Invader in Ljubljana, Hunto in Toronto, or Stik in London.

In New York you have two main choices when it comes to hunting street art: the Lower East Side or Brooklyn. I chose the latter, signing up for a two hour walking tour with Free Tours by Foot. Don’t let the name fool you though. While there’s no set price you need to pay upfront, you tip your guide at the end of the tour. This is their job after all. When you’re budget conscious tours that let you pay what you like are a great option. 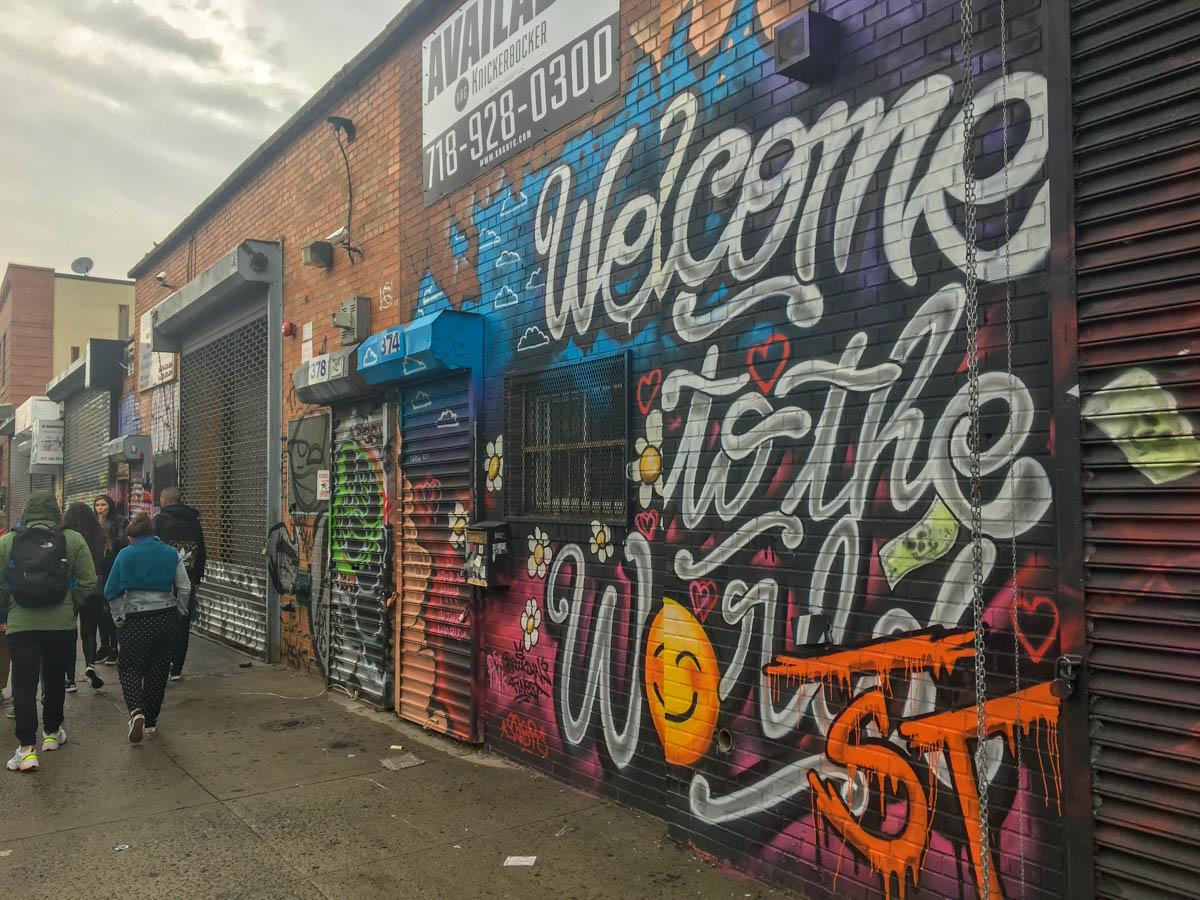 The neighbourhood of Bushwick has seen its share of ups and downs over the decades. It was first settled by the Dutch almost 400 years ago. In the late 1800s, it was home to German immigrants and became known as the beer capital of the Northeast due to the number of breweries housed there. Bushwick was a solidly middle class neighbourhood but fortunes began to slide after World War II as businesses moved out of New York and families moved to the suburbs. Bushwick in the 1980s was a rough and dangerous place to live, especially during the crack epidemic.

But it’s back on an upswing.

As Williamsburg prices crept up and up, artists started migrating further into Bushwick. With them came coffee shops, trendy bars, and of course, street art. Bushwick is now hipster central. While still one of New York’s poorer neighbourhoods, it’s bustling with life and colour…and increasingly, tourists. Bushwick has become known for all kinds of up-and-coming artists. Now it is also being recognized for a large and ever-growing graffiti exhibition: the Bushwick Collective.

You May Also Be Interested In:
Should You Stay in Brooklyn?
Article Continues 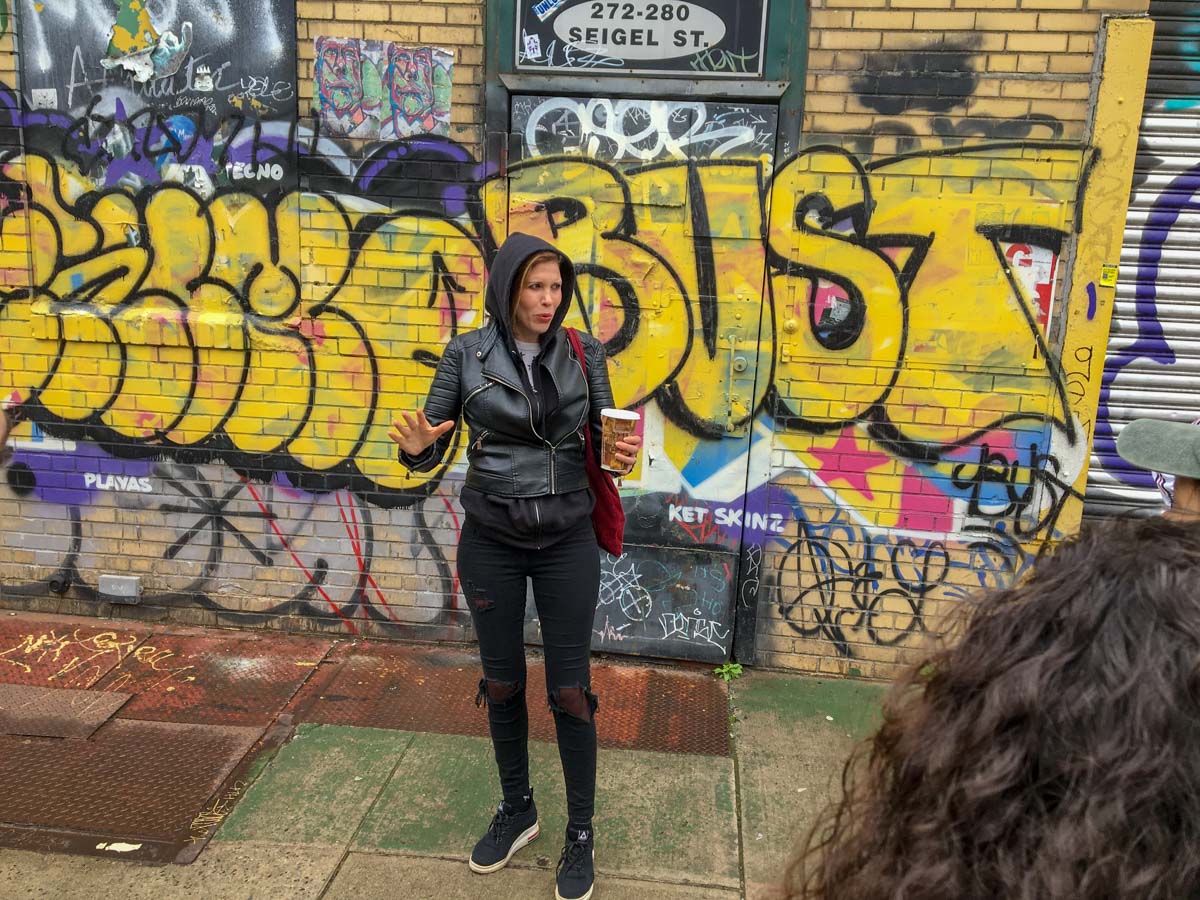 I met up with a dozen other street art enthusiasts on a sunny Saturday morning on the border of East Williamsburg and Bushwick. Over the course of a few blocks we’d learn a bit of the history of graffiti and street art in New York in general and the Bushwick Collective specifically.

The Bushwick Collective is a growing collection of legal walls where artists are invited to contribute their art for the public to see. They are given permission to paint, but are not paid to do so. Work generally lasts about 12 months though some stand out pieces have been known to survive years. New works go up year round and you’ll be able to find a new piece about every 6-10 weeks. 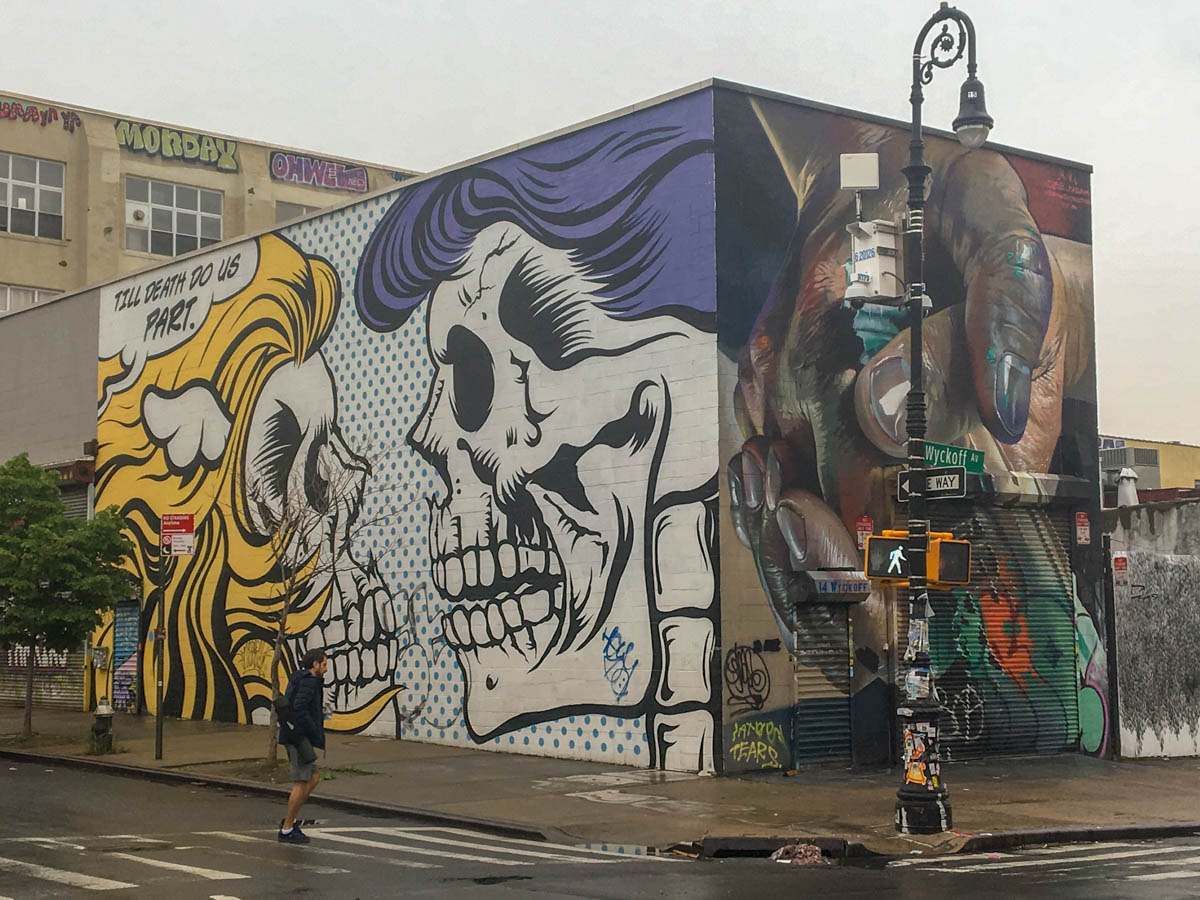 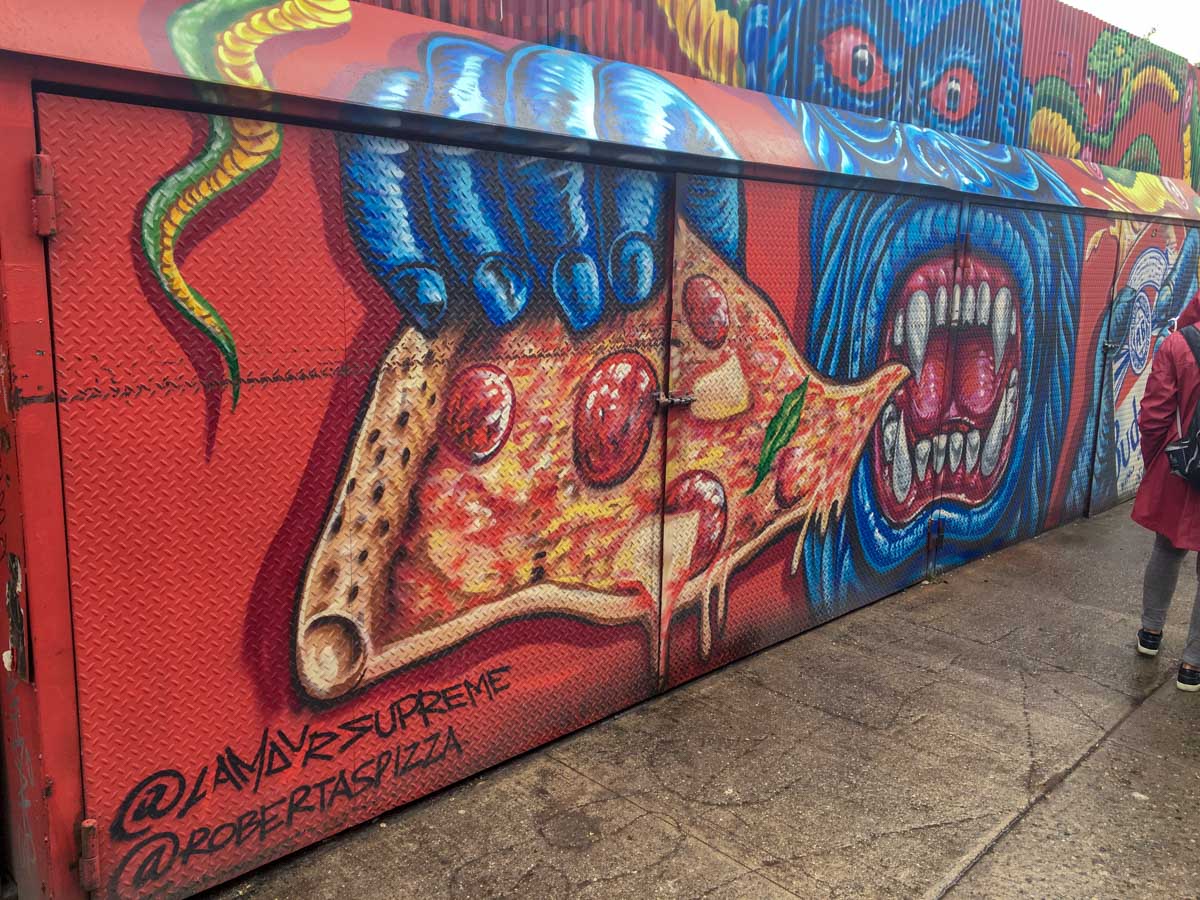 One of the things I both love and hate about street art is the impermanence of it. While I love being able to discover new art, it’s sad when good pieces get covered over. Such is life though, the only constant is change. So if you see a piece you love, photograph it. It may not be there when you return, but you can always look forward to discovering your next favourite piece.

Contrary to popular belief, not all graffiti and street art is illegal. In many cases artists work directly with building owners to spruce up blank, industrial spaces with bright, colourful art. Art has a transformative property and over the years, the proliferation of street art in Bushwick has changed a mainly grim and industrial neighbourhood into a colourful, lively tourist destination, and the Bushwick Collective has had a large hand in this. 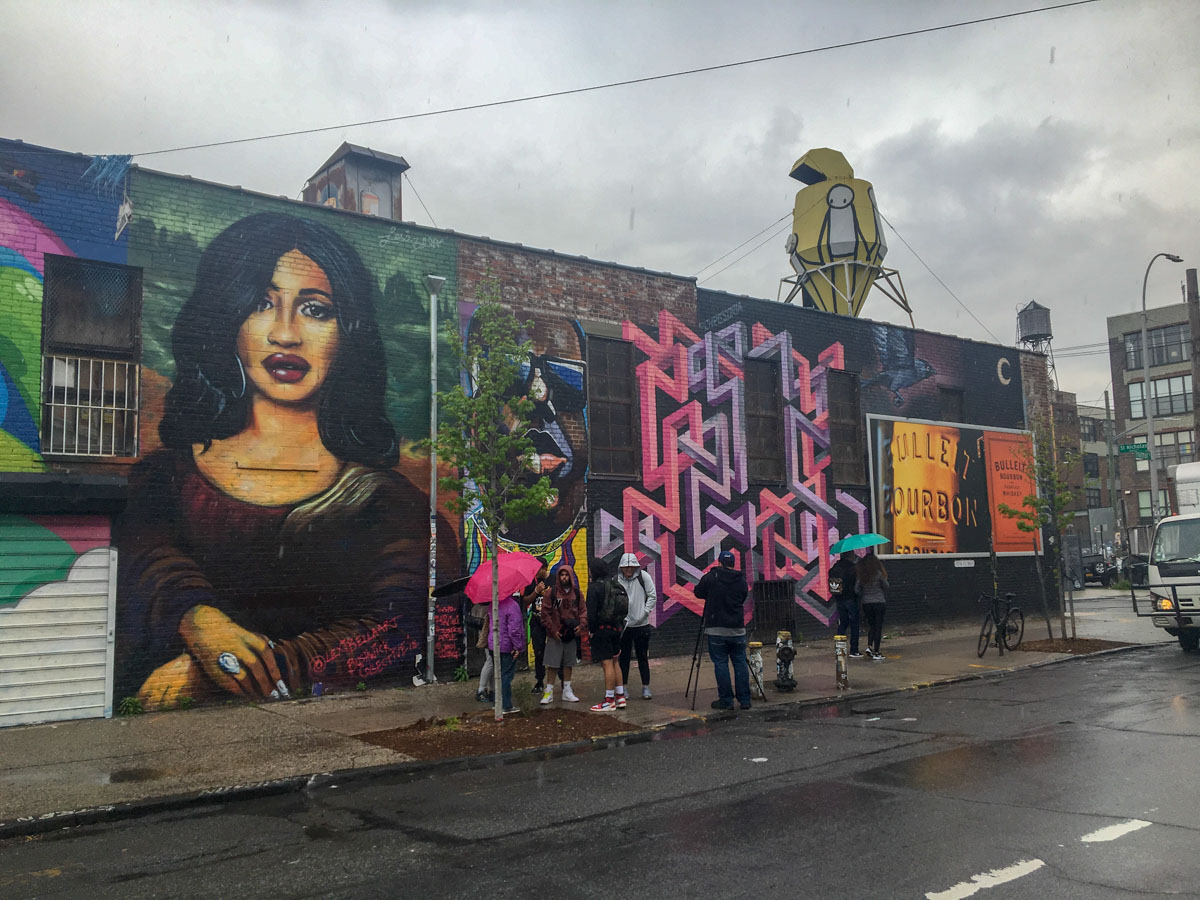 In 2011, Joseph Ficalora inadvertently became the creator and curator of the Bushwick Collective. As a child, his father was murdered during a mugging and then later his mother passed away from cancer. As part of his healing process, Joseph commissioned a mural in his home neighbourhood to honour his parents. Over time, one mural became two became three became dozens of pieces that now adorn the streets. The Bushwick Collective is a testament to not only Joe’s extraordinary resilience and vision, but to the transformative power of art.

Art gives people a voice. Art lets people be seen. Art lets us get to know and connect with each other. Even if we’re not artists ourselves, we can amplify the message by sharing pieces that speak to us. Art gives us hope. Art builds community. 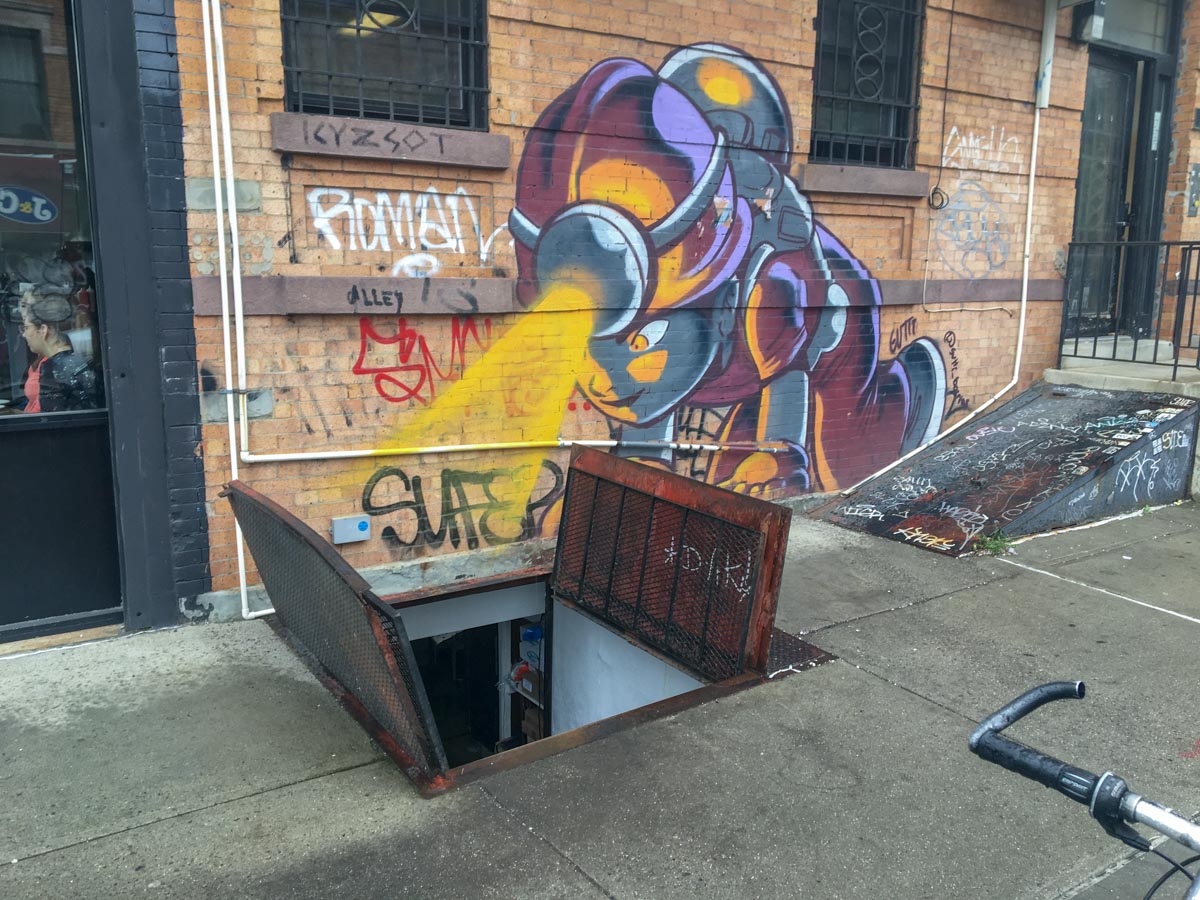 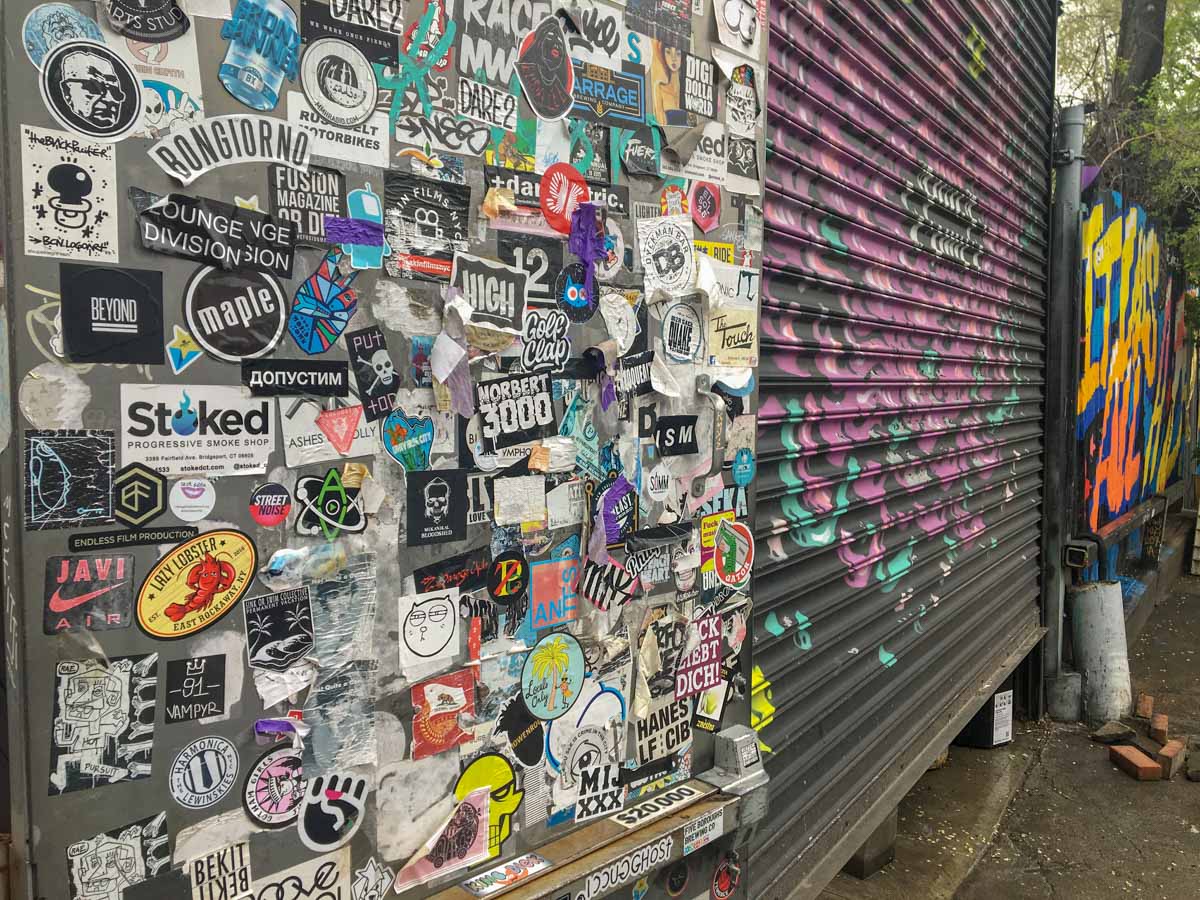 Types of graffiti and street art you’ll find in Bushwick: 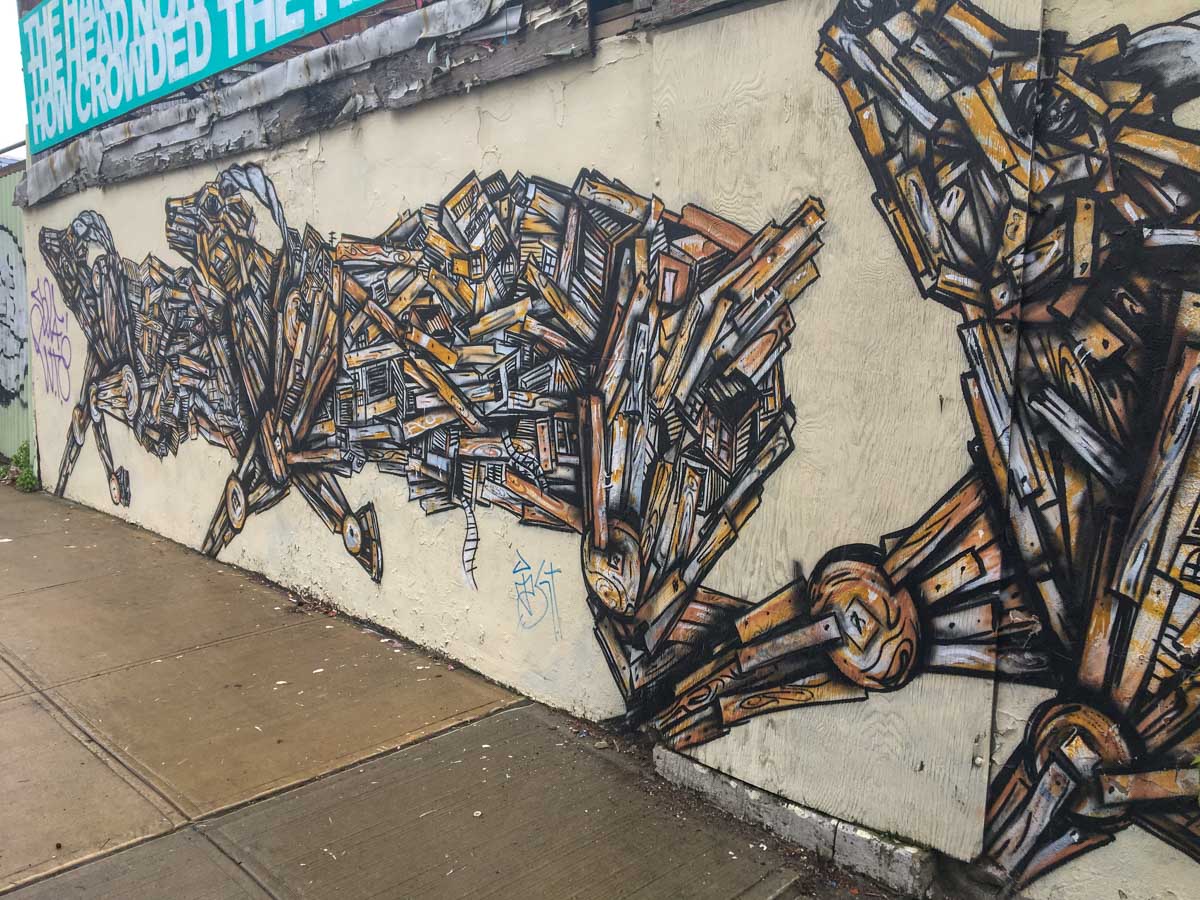 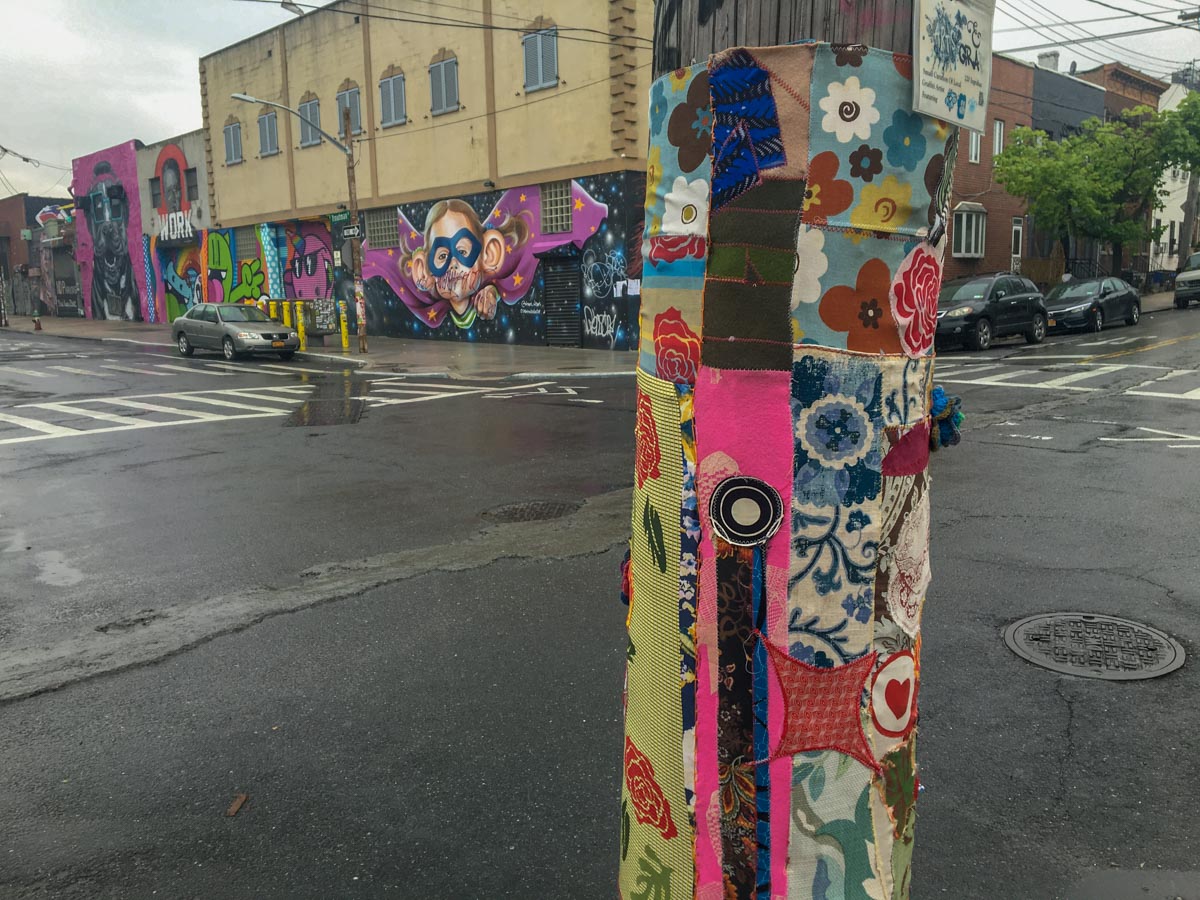 Since the art is on outdoor walls, you can visit any time, day or night. However there are a few times that are better than others to visit the Bushwick Collective. There are more tours and visitors on weekends, so if you’re visiting then, best get an early start before the locals and tours get on the go. Weekdays will be a bit slower and you’ll get a better feel for the natural vibe of the neighbourhood.

Early June is the best time to visit since artist activity picks up leading to the annual Bushwick Collective block party.

Whenever you visit, remember to be respectful of the people and space around you. While Bushwick is getting some newfound tourist attention, this is still someone’s home. 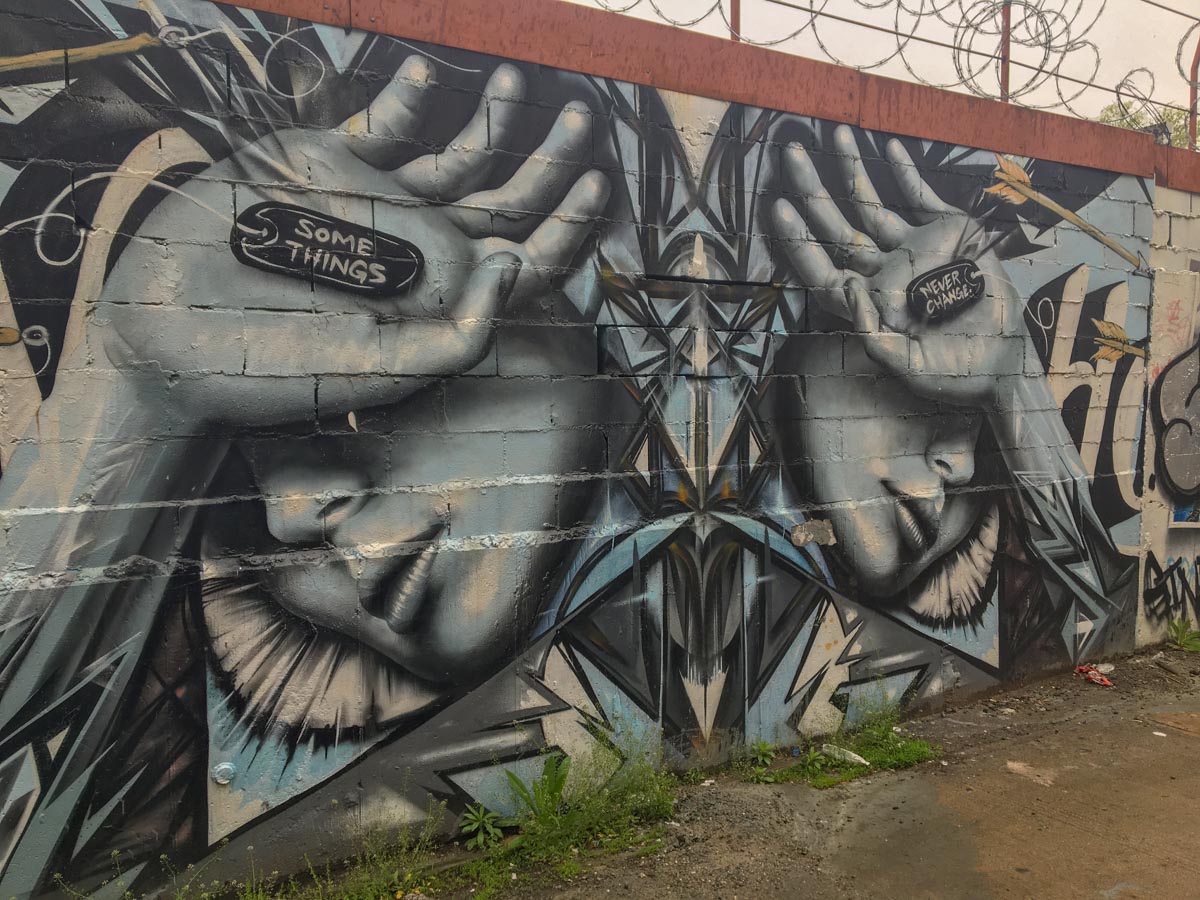 The focal point of the year is the Bushwick Collective Block Party. It’s typically held on the first Saturday in June and it’s art overload. Approximately 60% of the murals will be switched out. It’s free to attend and there’s a hip hop performance and a handful of street vendors and food trucks. Each year the blog party attracts locals and street art fans from across New York and beyond.