Glow with the Flow: Bio Bays in Puerto Rico 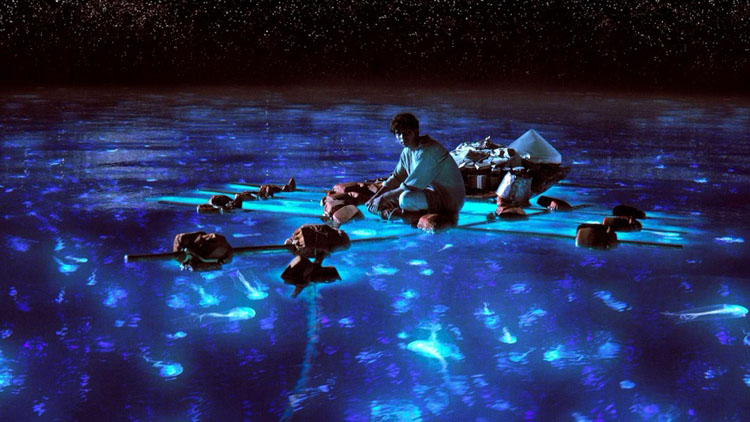 So this is a scene from Life of Pi but I swear the bio bays of Puerto Rico aren’t that different. They’re a magical thing that really exist.

I dipped my hand in the warm water of Laguna Grande, scooped up a handful and let the contents run down my arm. The water lit up and sparkled like I was a float in a Disney light parade. It was beyond magical and more than once my kayak mate commented how she felt like she was in a movie. With every dip of a paddle or swish of a hand the water would glow. Almost like someone had cracked open a glow stick and emptied the contents into the lagoon. There’s a reason bio bay visits are one of the most popular things to do in Puerto Rico.

What is a bio bay?

What is it that makes a bay bioluminescent? Millions upon millions of micro-organisms called dinoflagellates that light up when agitated. It’s thought that they do this as a form of protection. Perhaps illuminating their agitator for a larger predator to take care of. There are few bioluminescent bays in the world and three of them are here in Puerto Rico: Fajardo, Vieques, and Lajas.

Dinoflagellates are very delicate organisms and it doesn’t take much to make them go dark. The micro-organisms are solar powered and it takes them about a half hour to recharge after they light up for that second or two. Excessive rain will force them deeper into the water which makes it harder to get the sun so the overall effect is a diminished glow. There’s been concern about health of the bays lately. Last year the bay in Fajardo went black for a short while and just last month the bay in Vieques was struggling to maintain its glow. The health of the bays is a priority for the government of Puerto Rico since so many tourists visit to see them.

My first experience with a bio bay was in Fajardo, a 90min drive from San Juan. In order to reach Laguna Grande from the kayak launch point, we had to first kayak, in the pitch black, a mile through a twisting mangrove forest. The plan sounded simple enough, go single file and leave about half a kayak’s distance between you and the people in front, follow the little beacon on their boat. Easy peasey.

This is all well and good until the boat ahead plows straight into some mangroves, you follow and next thing you know you’ve got a 5 kayak pile-up and you’ve lost sight of the guide boat. Or the message doesn’t get passed down the line to keep to the left and you get squat between an electric boat and a wall of mangroves, ending up pointed the wrong way. Or, after getting the hang of this kayaking thing, a group going the opposite direction get tangled up with you forcing you to float backwards with the current that you just paddled hard to get through in the first place. But at least you weren’t in the kayak that capsized. Did I mention that it was pitch black? The best advice I can give is that you do what you can to be the first boat behind a guide and stay there.

The mangroves, my kayaking nemesis, help the dinoflagellates thrive by releasing B12 into the water. So I guess I can forgive them for making me bleed.

Despite all the kayaking woes, the trip was totally worth it. The first time you dip your paddle in the water and see that glow you’ll forget all about the scrapes on your hand and that ache in your arms. To see the water light up with the slightest touch filled me with awe. I could’ve stayed out there marvelling at the blue-green sparkles for hours. A fish swam by cocooned in an alien glow, a trail behind it like a 90s mouse cursor on a teenager’s website. Seriously spectacular. I longed to dip my whole body in and have those watery fireflies hug my limbs but for the health of the bay, swimming isn’t allowed. Who knows what chemicals we could be washing into the water. I had to make do with making my hand or paddle light up like an aquatic 4th of July sparkler.

Completely made me forget about that disorienting mile long kayak back to the van.

My trip to Fajardo was amazing and everyone told me that the bio bay in Vieques was even more vibrant. I had plans to visit the island anyway so I decided I had to check out what was meant to be the best of the bunch. What no one told me though was that Mosquito Bay had been having some issues lately and not long before had gone dark. The moon was also on the rise which didn’t help our cause. You want the sky to be as dark as possible so you can better see glow in the water. While my outing had two strikes going against it, I still had a great time. There was no long mangrove tunnel to stress me out. Since I was solo I was paired with one of the guides so I didn’t need to fret and struggle to keep up with the group. Though the moon was out and the bay was weak I was still able to see the dinoflagellates light up when I shielded my eyes and it was still magical. I can only imagine what the experience is like on a moonless night with a strong, healthy bay. Life of Pi, eat your heart out.

We live in such a fast-faced, information-filled world that it takes a lot to really wow us. On a moonless Caribbean night, floating around in a plastic kayak, a tiny organism can take your breath away.

Have you ever experienced a bio bay?